In 2004, Kevin R. Ryan was fired from his job at a subsidiary of Underwriters Laboratories Inc., because he “expressed his own opinions [regarding 9/11] as though they were institutional opinions and beliefs of UL."wanttoknow.info/911kevinrryanf…

“Ryan wrote that the institute's preliminary reports suggest the WTC's supports were probably exposed to fires no hotter than 500 degrees.”
Ryan: “This story just does not add up. If steel from those buildings did soften or melt, I'm sure we can all agree that this was certainly not due to jet fuel fires of any kind, let alone the briefly burning fires in those towers."
“Alternatively, the contention that this steel did fail at temperatures around (500 degrees) suggests that the majority of deaths on 9/11 were due to a safety-related failure. That suggestion should be of great concern to my company."
UL responded to correct Ryan.
“The company told The Tribune ‘there is no evidence’ that any firm tested the materials used to build the towers.”"’UL does not certify structural steel, such as the beams, columns and trusses used in World Trade Center,’ said Paul M. Baker, the company's spokesman.”
In other words, they contended that Ryan had dragged them into something outside their purview and on top of it, spoke for them.
Anyone would get fired for that, but was he right about the temperature of the fire and how that would affect the official narrative?
Again, the substance of the story concerns both content (what happened) and process (how was it handled).
“As Ryan began to learn more about the issues involved with the destruction of the towers and the ongoing investigation into that destruction, his concerns only grew.”corbettreport.com/9-11-whistlebl…
“Why had the actual steel evidence of the towers’ destruction been illegally removed and disposed of before a proper investigation could take place?”
Who oversaw the removal of the evidence?Then-NYC Mayor Rudy Giuliani.corbettreport.com/911-suspects-r…
“RUDY GIULIANI: ‘We were able to move 120 dump trucks out of the city last night, which will give you a sense of the work that was done overnight.’”(Source: Donald Trump Commission on Terrorism NYC? I clicked the link - YouTube acct terminated.)corbettreport.com/911-suspects-r…

“Despite reassurances that the rapid removal of the evidence from Ground Zero was important for emergency access, this process went far beyond merely clearing a path for rescue workers.”
“As Erik Lawyer, founder of Firefighters for 9/11 Truth points out, the massive operation to haul away over 1.5 million tons of debris and to sell much of the steel to Chinese firm Baosteel at discount prices was not just an overzealous approach...but was itself a crime.”
ERIK LAWYER: “9/11 was the greatest loss of life and property damage in U.S. fire history. This should of been the most protected, preserved, over-tested and thorough investigation of a crime scene in world history. Sadly it was not.”

“What was it? Well, we know from their (NIST) admission the majority of the evidence was destroyed.”
“By their own admission, the NIST investigation of Tower 7 had no physical evidence. How do you investigate a crime when you’ve destroyed all the evidence? It doesn’t make sense.”

“They also admit that they refused to test for explosives or residue of thermite.”
“Now this is what I’m going to go into real quickly is that there are national standards for for an investigation. That’s what all of us are asking for. An investigation that follows national standards and holds people accountable.”
“In 2007 Eric Beck, a senior supervisor of the recycling facility that sifted the debris, admitted that some of those human remains ended up in a mixture that was used to pave roads and fill potholes in New York City.”
Related question: “Why wasn’t the Mayor and the city’s emergency personnel in the location that had been purpose built for just such an event?”
The place was called “Giuliano’s bunker” and it was literally right there.
“Located on the 23rd floor of World Trade Center Building 7”
“Upon arriving...we noticed that everybody was gone. I saw coffee that was on a desk, the smoke was still coming off the coffee. I saw half-eaten sandwiches.”“(SOURCE: Barry Jennings WTC 7 (Explosions) Interview)”
Here is that interview. 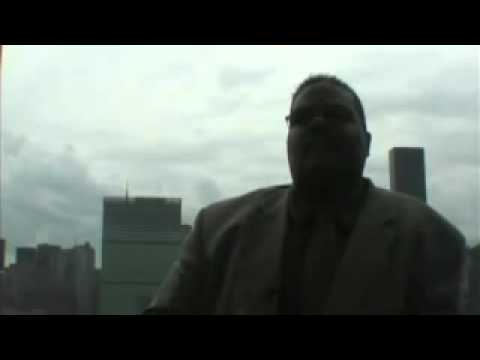 “we were operating out of there when we we’re told that the World Trade Center was going to collapse”
“And it did collapse before we could actually get out of the building.”
“So we were trapped in the building for 10-15 minutes and finally found an exit, got out, walked North and took a lot of people with us.”
Why didn’t Giuliani tell “the police, firefighters and other responders who were still working in and around the buildings”?
How did Giuliani get a warning when there was “no possible way for this to be predicted in the first hour of the unfolding disaster”?
Giuliani 2008: “Ma’am, I didn’t know that the towers were going to collapse.”corbettreport.com/911-suspects-r…

He then reiterates this statement. “Well the fact is that I didn’t realize that the towers would collapse. I never realized that.”

“So where was the Mayor on 9/11? On Pier 92, which was already set up as a functional command center due to a full-scale emergency ‘drill’ by FEMA that, by a remarkable coincidence, had been scheduled for the following day.”
“So what is the reward for Giuliani’s criminal actions on 9/11? An offer to become the head of the Department of Homeland Security in the event of a Trump presidency, of course.”corbettreport.com/911-suspects-r…

President Donald Trump would name Rudy Giuliani secretary of Homeland SecurityDonald Trump is cutting “secret deals” to surround himself with familiar faces, we’re told.https://www.nydailynews.com/entertainment/gossip/confidential/trump-likes-giuliani-secretary-homeland-security-article-1.2625261
I find all of this very strange and troubling, and think the American people deserve to know what’s going on.
___________
By Dr. Dannielle Blumenthal. All opinions are the author's own. Public domain.
- January 14, 2020