Pelosi and Mandelblit: Undone By Their Talking Points

Read to the very end to see how an alert social media user uncovered the truth. God speaks through the anons. 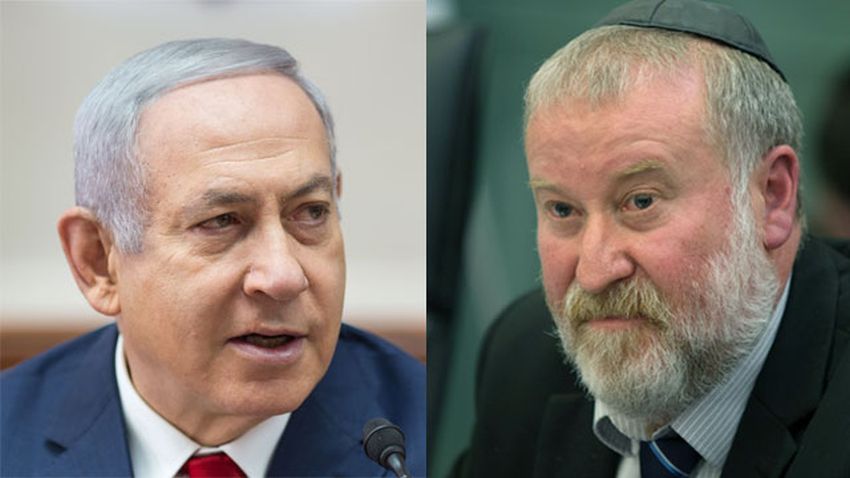 Netanyahu: I will continue to lead the country in face of an attempted coup by the law enforcement arm - DEBKAfilePM Binyamin Netanyahu sharply rebutted the Attorney General Amihai Mandlblit’s decision to indict him on charges of bribery, fraud andhttps://www.debka.com/ag-mendelblit-decides-to-indict-pm-netanyahu-on-charges-of-bribery-fraud-and-breach-of-trust/
"PM Binyamin Netanyahu sharply rebutted the Attorney General Amihai Mandlblit’s decision to indict him on charges of bribery, fraud and breach of faith. He accused law enforcement authorities of conducting “a polluted, tendentious inquiry” designed to set him up"
"He accused the police & prosecution systems of years of legal abuse, citing examples. The people have lost faith in the law enforcement authorities, he said. ....and demanded that an external, nonpartisan commission...INVESTIGATE THE INVESTIGATORS" (direct quote)
When people use the same words (Prime Minister Netanyahu and President Trump) it's either because they're copying each other or because they talk.
On a spiritual level I think that Orthodox Jews are aware the Messiah is at hand, but before the Messiah can be announced there is a period of judgment, and this is reflected in the false impeachment process. It has to happen that Satan has his chance to make a case.
The truth is that the prophecies are a lot more dire than Tweets, and this is a measure of God's mercy that the war is being fought on the level of information, so that we have a chance to avoid unnecessary bloodshed.
I told you I had the dream of the ice ships.And I told you I had the dream of the baby in the sky, like a star that was coming to earth.This was about 2 years ago January (my recollection)Mashiach (the Messiah) is hereIt is in our power to bring himAwakening = acting
Just because someone looks religious doesn't mean they are.
"Mandelblit earlier laid out in a public press conference his reasoning for deciding to indict the prime minister, saying he did so with a heavy heart but in full conviction that he was performing his duty."
Mandelblit is their AG.
"Netanyahu fired back by charging police investigators backed by chief prosecutor Shay Nitzan of building their case against him by extorting lying admissions from witnesses by threats against their families."We know that happens.
I told you before that I believe America is a kind of gateway to Israel, meaning that the Messiah comes here first (Mashiach Ben Yosef, @POTUS, bringing world peace) and then Israel, religious service and world consciousness of God.
In the Scripture it says that the boundaries of Israel will expand and also that the non Jewish believers will serve as Jews do, and I take this to mean that there will be lightning fast railway and/or air flights between America and Israel - we will literally have a superhighway
The future is unfathomably beautiful. There will be an end to disease. All of the earth will flower. All will be fed. All will be studying, and creating, and the children will be completely safe. Housing will never be an issue.It is a few evil people who want to steal it
Netanyahu and @POTUS together are partners in bringing this vision to life, and the evil ones like Soros will stop at nothing to stop them, because their hearts are infected with hate.
Religious people know this
Pastor Joel Osteen says many powerful things - "Praise Precedes The Victory" and also "Build Your House With Prayer" - or something like this. You must begin to SEE and really VISUALIZE what is going to happen in a POSITIVE way. Not just hanging the pedos -
It's so close, it really is. And this is why the corrupt ones are terrified, no matter how many dumb parties they throw and no matter what they say on the Internet. "Nothing can stop what is coming," because God is increasingly quickly making it happen.
"The Senate is the target" - I am not sure we will actually see a trial, but if we do it will be interesting.Just wanted to share a few thoughts...hope you're all doing well.Dannielle
aka Dossy (from Hadassah, my Hebrew name)(End.)
mentions
mentions compile
PS Israel Attorney General gave himself away by echoing Pelosi, who said: "We Impeach With a ‘Heavy Heart,'"Thanks @RickJSportPlays

Pelosi: We Impeach With a ‘Heavy Heart, This is Very Prayerful’ | CNSNews(Getty Images) (CNSNews.com) -- Although public hearings on the impeachment of President Trump started only yesterday, House Speaker Nancy Pelosi (D-Calif.) said today that the president's actions …https://www.cnsnews.com/article/washington/kharen-martinez-murcia/pelosi-we-impeach-heavy-heart-very-prayerful
What a bunch of dumb crooks.
___________

By Dr. Dannielle Blumenthal. All opinions are the author's own. Public domain.
- November 22, 2019