🔥Ivan Pentchoukov has posted proof that a change in @ODNIgov ICIG reporting form is typically accompanied by an email from the ICIG.Congress can check whether the “August 2019” revision had same.@ChuckGrassley @LindseyGrahamSC @Jim_Jordan @RepMattGaetz @gatewaypundit @GOP
Unroll available on Thread Reader
If as @ODNIgov states in its September 30 news release the form was changed in response to whistleblower complaints, ALL OF THEM should have received the NEW FORM with an email from ICIG. @GOP @LindseyGrahamSC @ChuckGrassley @RepMattGaetz @Jim_Jordanodni.gov/files/ICIG/Doc…
If NOBODY received an email, then this is inconsistent with a claim that the form was changed for CUSTOMER SERVICE purposes.
If as the @nytimes claims a second whistleblower is waiting in the wings, an entirely new investigation is also waiting in the wings — as to whether their case was handled by proper procedure, with an email about the new form.
Here is the @nytimes story 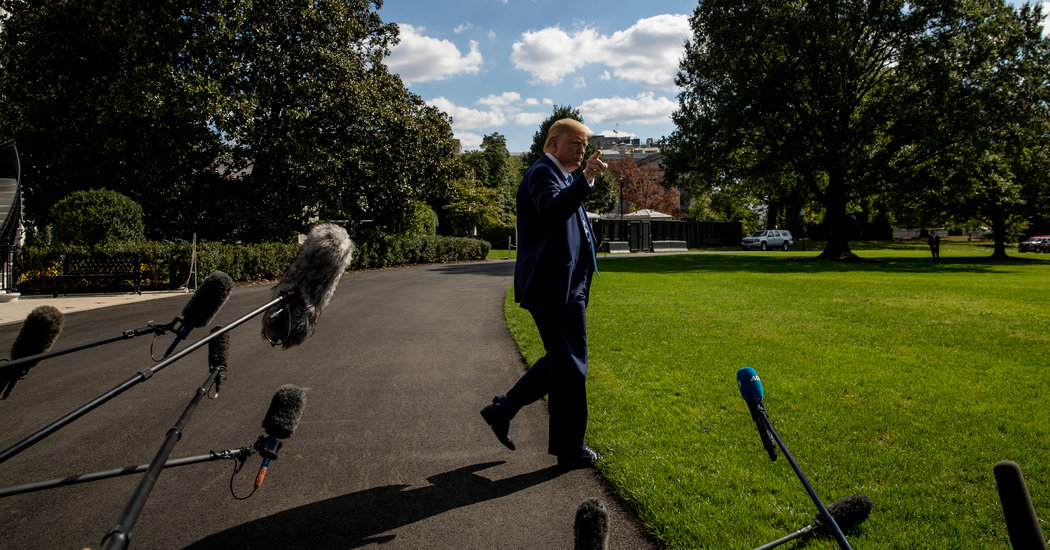 2nd Official Is Weighing Whether to Blow the Whistle on Trump’s Ukraine DealingsThe official, a member of the intelligence community, was interviewed by the inspector general to corroborate the original whistle-blower’s account.https://www.nytimes.com/2019/10/04/us/politics/second-trump-whistleblower.html
In addition, all Federal employees are bound by the Standards of Ethical Conduct. oge.gov/Web/oge.nsf/Re…
These standards are enshrined in Federal law, 5 C.F.R. Part 2635, as amended at at 81 FR 81641 (effective January 1, 2017).
Here is the PDF.oge.gov/Web/oge.nsf/0/…

Michael Atkinson as the ICIG would be the key point person in ethics questions related to the handling of whistleblower complaints. (Investigate the investigators.)
I believe we have the exact same pattern at work here as we had in the fraudulent Russia investigation.
That is, I believe Obama told Brennan to bring him a reason to launch a counterintelligence investigation into Donald Trump.
I believe Brennan went to intelligence contacts from the UK and ultimately got his excuse.
With the excuse “documented,” the “investigation” could begin and sprawl out endlessly.
When nothing was found, but having defamed the President by virtue of investigating him and generating headlines—they could then “investigate” him for “obstructing” the setup.
These are the most evil minds at work.
Similarly with the Ukraine fraud, they only needed to give Michael Atkinson an excuse.
The question is, what exactly did Michael Atkinson receive? And did he process it appropriately?
In my job I deal with Congressional staffers all the time and there is a basic hole in the @ODNIgov story that nobody is even addressing.
To be clear I am speaking only for myself and not my agency, in the public interest.
When a constituent approaches their member of Congress with a concern, and they don’t know how to properly route it, the staffer will take a privacy release form and make an inquiry.
Let me caveat this: I do not know how this works differently if the inquiry goes to an entire Committee and not to a single member of Congress.
In the case of a Committee, if the inquiry’s destination is Congress itself, they do not need to go back to the agency.
If the complainant’s intent is whistleblowing to an oversight body in Congress, by definition the whistleblower would not go back to the agency.
Of course I am not a lawyer and there are legal questions. What about classified information? I don’t know.
Fortunately I found a training module on the @ODNIgov website that we can use to learn more.
But in the meantime, just to be clear, when a constituent approaches Congress with a concern, it usually goes like this.
1. Constituent makes inquiry2. If not already filled out, constituent is given privacy release form3. Cong. staffer approaches agency (in any way, but often phone or email)(Note: Agency contact may be a Hill liaison who refers to program office)
4. Agency responds:—Method A: to staffer (they always want something in writing)—Method B: to constituent (confirm contact with staffer)
5. Where I am, we log inquiries into a correspondence system that tracks incoming queries and outgoing responses.
6. It does not make sense to me, unless the parties are very familiar with one another, that a staffer would tell the constituent “to get a lawyer and ask the IG.” In that scenario, it’s not a true constituent inquiry.
From my interactions with Congressional staffers, they are extremely eager to help the constituent and they want an accurate, comprehensive answer as quickly as possible. They are friendly advocates.
So if a staffer is telling someone the equivalent of “I can’t help you,” it’s because there is something about the inquiry that is “off,” and they don’t want to get involved and get in trouble.
I think we have to be careful not to assign guilt unfairly here. & it sounds like there was something wonky about the inquiry 2 the House Intelligence Committee (I am sure they get a lot of material they can’t address directly) and so the complainant was immediately referred out.
So part of the investigation has to center on the interaction between the staffer who received first contact, and Rep. Schiff. What did the staffer tell him, and when?
I can imagine the staffer saying something like: “Sir, we had someone come in here saying they had information on Pres. Trump and Ukraine - I told him to get a lawyer and contact IG.”
And I can see Schiff sitting there going, well this is interesting, but not really having enough to say one way or the other.
This is not to characterize what happened was I was not there. It is to imagine a logical reason why he didn’t say anything at first.
So here is the ODNI training on how to handle a whistleblower. odni.gov/files/document…
Let’s take a look at the document properties. One moment.
Just so we are all on the same page, here's Page 1 of the training. You can see it uses the Calibri font which was used in the May 24, 2018 version of the "Urgent Concern" form.

You can still download the form at Scribd, which I just did. 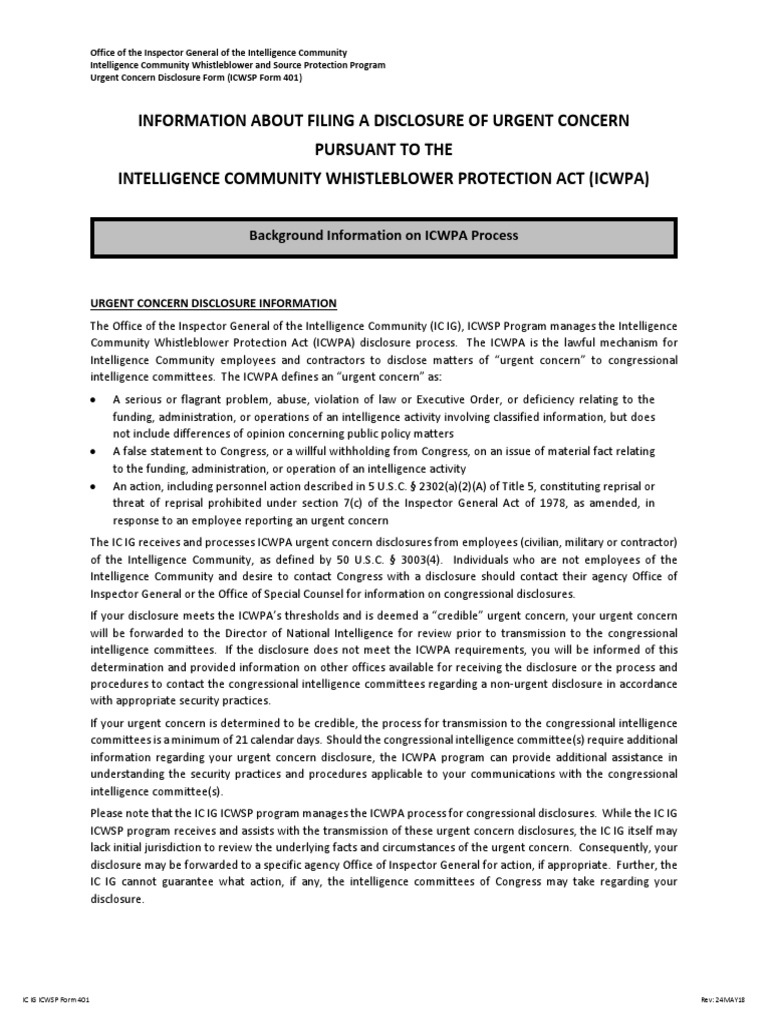 Icwpa Form 401 (24may18) | United States Intelligence Community | Public SphereUrgent Concern Disclosure Formhttps://www.scribd.com/document/427767481/Icwpa-Form-401-24may18#download
Here is the Tweet about the email received with the May 24, 2018 form.You can see that they weren't paying much attention to fonts, because the email is Arial with weird spacing.
Unroll available on Thread Reader

The whistleblower training PDF has a space in the filename.It was created 11/21/2016 11:30:46 AM and not modified.This looks like a Word document that someone scanned to a PDF (Hewlett-Packard Multi-Function Printer, or MFP) then uploaded to the content management system.

Importantly, the "Urgent Concern Disclosure Form" (why do we need this anyway, as @AndreVanDelft points out - all whistleblowing is urgent, or an IG can figure that out!) was updated as of May 24, 2018.The training is from November 2016, 1.5 years PRIOR.
mentions I was just checking something.
mentions Urgent Concern Disclosure Form - document properties.No spaces in the filenameAuthor: Geoffrey J. Guska DNICreated: 5-17-2018 13:14:35Modified: 5-31-2018 15:37:50This is the work of a professional civil servant.

mentions The May 24, 2018 "Urgent Concern" form fails the 508 test. So does the "Whistleblower" document (the training). This suggests to me that conformance to 508 is not a test of whether the document is genuinely ODNI. Their own staff work doesn't measure up in this area.

mentions Definition of "Urgent Concern" is here. "Does not include differences of opinion concerning public policy."

mentions Per procedure, the whistleblower absolutely can go to a Congressional intelligence committee to report, and the IC IG is supposed to explain that procedure.Say what???????????????

Why would the IG take the report if the person wanted to go to Congress?Why didn't the staffer take the report?It can only be that there was something about the complainant that wasn't fully kosher - as speculated yesterday, perhaps NOT AN EMPLOYEE OR CONTRACTOR.
Volker was a volunteer as envoy to Ukraine. That would fit this picture. (It doesn't mean he is the whistleblower, just speculating.)
End, for now.@ODNIgov ICIG Atkinson should be able to answer many of the questions raised here.
___________
By Dr. Dannielle Blumenthal. All opinions are the author's own. Public domain.
- October 06, 2019