1) "The FBI is prohibited from engaging in investigative activity for the sole purpose of monitoring the exercise of constitutional rights." - Allegedly authentic FBI Law Enforcement Bulletin, 2019 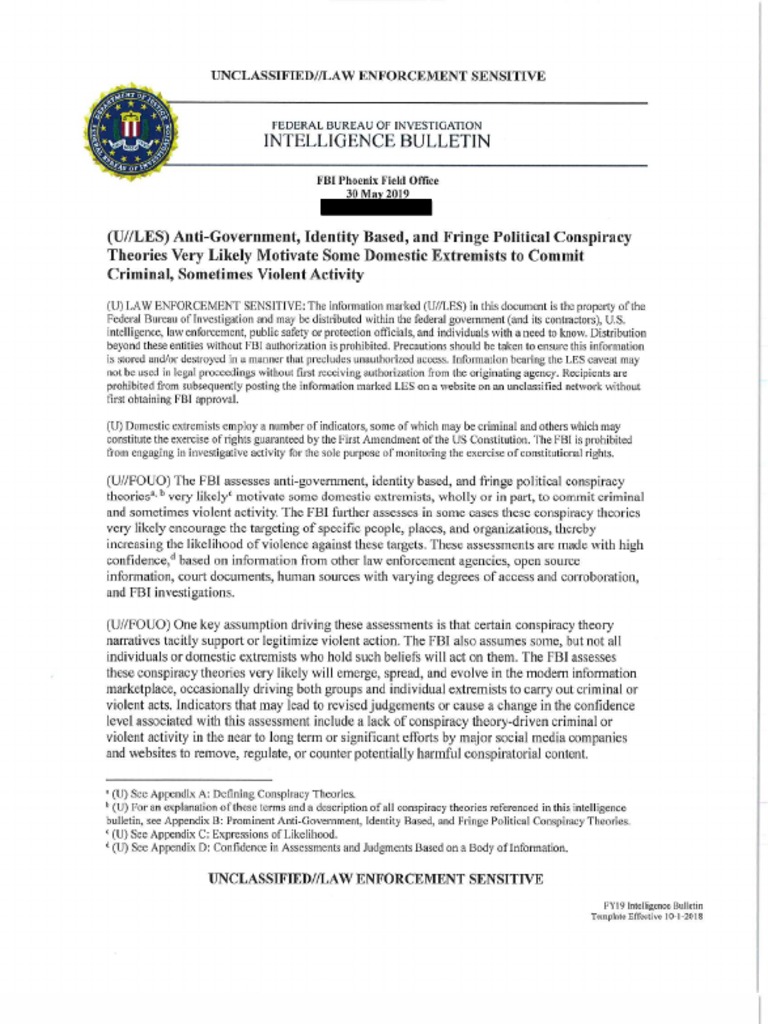 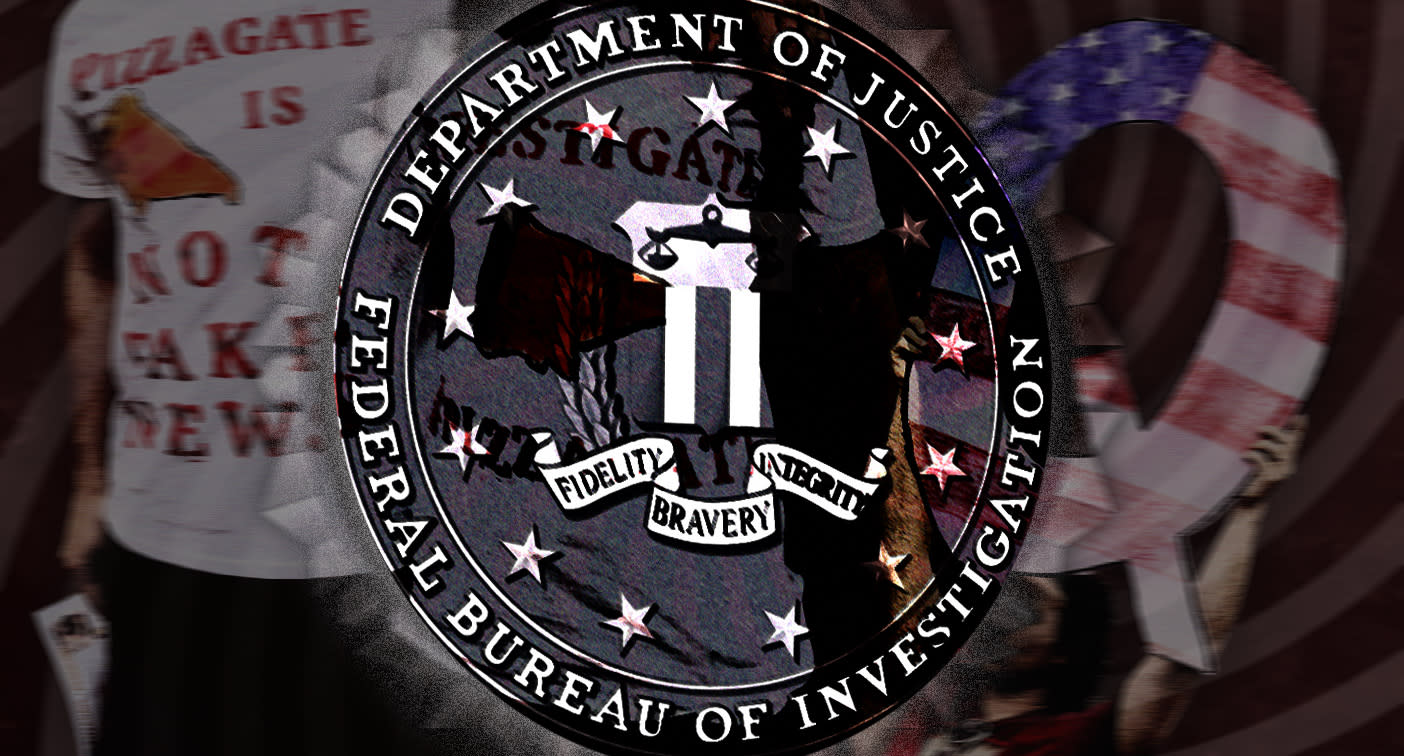 Exclusive: FBI document warns conspiracy theories are a new domestic terrorism threatThe FBI for the first time has identified fringe conspiracy theories as a domestic terrorist threat, according to a previously unpublicized document obtained by Yahoo News.https://news.yahoo.com/fbi-documents-conspiracy-theories-terrorism-160000507.html
3) "The FBI intelligence bulletin from the bureau’s Phoenix field office, dated May 30, 2019, describes “conspiracy theory-driven domestic extremists,” as a growing threat, and notes that it is the ***first such report** to do so."

10) 2009 - Janet Napolitano's DHS published this: "(U//FOUO) This product is one of a series of intelligence assessments published by the Extremism and Radicalization Branch to facilitate a greater understanding of the phenomenon of violent radicalization in the United States. "

11) This is the cover of that report as it displays on Amazon. It's on Kindle for 99 cents or you can get it for free at the link below Amazon's.amazon.com/FOUO-Rightwing…fas.org/irp/eprint/rig…

12) Delene Kvasnicka has written many, many books. The long, descriptive titles on her other books resemble the long, descriptive title on this work. She has written extensively for the DOD and DHS (including the Coast Guard) in particular.goodreads.com/author/list/48…
13) In fact, The Department of Homeland Security regularly publishes intelligence assessments.
14) Example: (2017) "Countering Violent Extremism (CVE) – Developing a Research Roadmap Final Report" (RTI International for DHS/S&T, October 2017) dhs.gov/sites/default/…
15) In DHS code, "violent extremism" means radical Islamic terrorists. You can see references to Islam all throughout the 2017 report.
16) Here is the 2015 DHS report on "violent extremism," "Countering Violent Extremism (CVE) – Developing a Research Roadmap; Stakeholder Recruitment and Engagement Plan (November 2015)"Again, references to Islam all throughout. Link in next tweet.
17) The report states that it was "prepared by RTI International for Richard Legault and Kathleen Deloughery, Science & Technology Directorate, U.S. Department of Homeland Security, RTI Project Number 0214428.003"dhs.gov/sites/default/…
18) This is an August 2011 DHS report called "Empowering Local Partners to Prevent Violent Extremism In The United States. It was published by the White House, but DHS contractors probably wrote it (see URL).dhs.gov/sites/default/…

19) Again, references to Islam throughout.
20) Of course, as Hillary Clinton herself stated, and as the U.S. Defense Intelligence Agency admitted, we created these extremists ourselves. 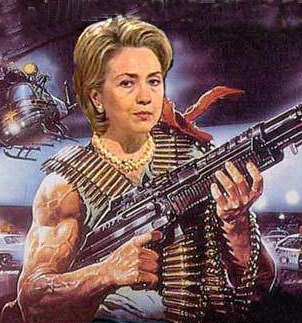 Hillary Clinton: "We Created Al Qaeda". The Protagonists of the "Global War on Terrorism" are the Terrorists - Global ResearchThe “Global War on Terrorism” uses Al Qaeda terrorist operatives as their foot soldiers. “Political Islam” and the imposition of an “Islamic State” (modeled on Qatar or Saudi Arabia) is an integral…https://www.globalresearch.ca/hillary-clinton-we-created-al-qaeda/5337222 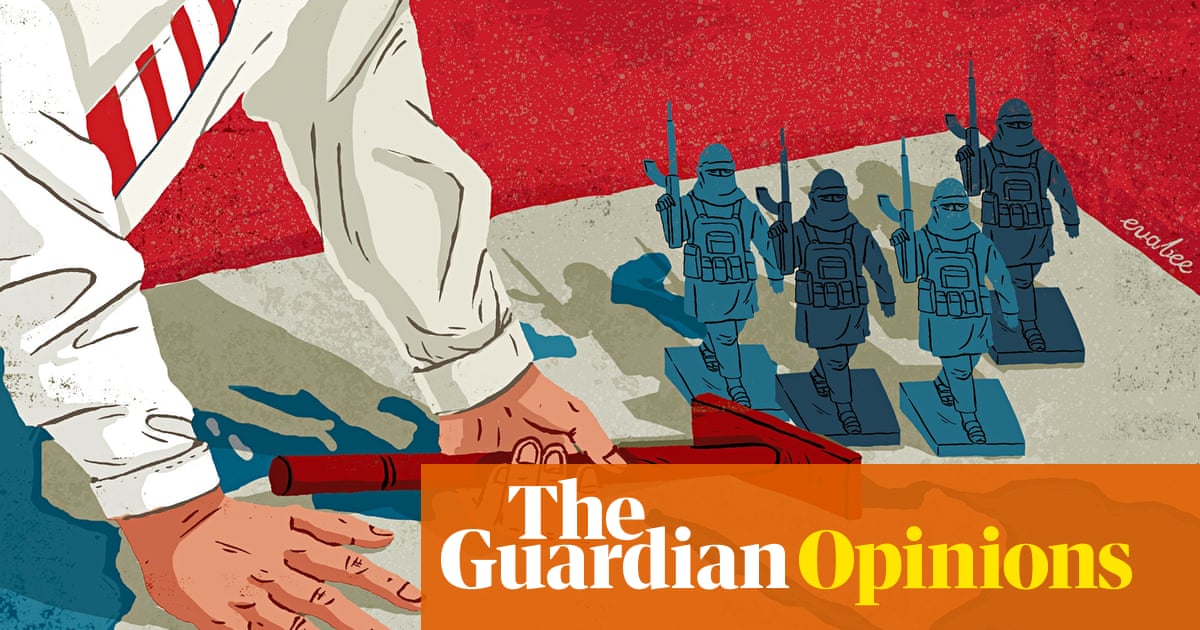 Now the truth emerges: how the US fuelled the rise of Isis in Syria and Iraq | Seumas MilneThe sectarian terror group won’t be defeated by the western states that incubated it in the first placehttps://www.theguardian.com/commentisfree/2015/jun/03/us-isis-syria-iraq
21) In any case, the DHS document from 2009 was "coordinated" with the FBI, it says."Coordinated."
22) The formatting of the two documents (2009 and 2019), both of which focus on right-wing extremism, is strikingly similar, indicating the same editorial eye.

23) Now that I have seen the 2009 document, if I had to guess, I would guess that the same contractor who was paid to write that one, was also paid to write the 2019 version.
24) It seems like an "off-books" job, where the contractor (a skilled hired hand) got a template and wrote to it.
25) A skilled hired hand who can knock these types of things out quickly is also going to be a good writer, and the 2019 "FBI bulletin" delivers on that front.
26) "One key assumption driving these assessments is that certain conspiracy theory narratives tacitly support or legitimize violent action. The FBI also assumes some, but not all individuals or domestic extremists who hold such beliefs will act on them." - this is high level.
27) The writer claims to consolidate 6 years of research, including primary research through interviewing human subjects. This isn't something a faker just pulls out of their hat.

28) Looking at the documents side by side, this is not an FBI product, but the product of a writer who used to work as a contractor for DHS. The writer had access to FBI information.
29) The concern over rightwing extremism is obviously nothing new, but it is far outweighed by the Obama Administration's attempts to study how one might defuse radical Islamic terror at home.
30) Here's another one from the DHS "Countering Violent Extremism (CVE) Subcommittee" - 2016.So is Obama a racist for trying to stop radical Islamic terror?Asking for a friend.dhs.gov/sites/default/…

31) The truth is, nobody thought that Patriots were a threat even remotely close to that posed by radical Islamic terror. But Obama had to find a way to create a kind of moral equivalence, and keep the Islamic community calm.
32) When the 2009 report came out, targeting Patriots, of course people were furious.cnn.com/2009/POLITICS/…
33) 4/15/2009: "The Department of Homeland Security will never monitor ideology or political beliefs, the head of the agency said Wednesday, responding to criticism of a recent report on right-wing extremist groups."
34) "We don't have the luxury of focusing our efforts on one group; we must protect the country from terrorism whether foreign or homegrown and regardless of the ideology that motivates its violence." - Janet Napolitano

35) "Radio talk show host Rush Limbaugh decried the report on Tuesday, saying, 'There is not one instance they can cite as evidence where any of these right-wing groups have done anything.'"
36) "You have a report from Janet Napolitano and Barack Obama, Department of Homeland Security portraying standard, ordinary, everyday conservatives as posing a bigger threat to this country than al Qaeda terrorists or genuine enemies of this country like Kim Jong Il" - Limbaugh
37) "Michael Savage, another conservative commentator, also criticized the report. 'What does Big Sis say these right-wingers are concerned about? Illegal aliens, the increasing power of the federal government, gun grabs, abortion and the loss of U.S. national sovereignty.'"
38) "In other words, anyone who is worried about preserving our borders, language and culture is on Big Sis' watch list."
39) "Americans are not the enemy. The terrorists are." - then American Legion National Commander David K. Rehbein
40) CNN ended its story with: "The Obama administration in January issued a warning about left-wing extremists. Both reports were initiated during the administration of President George W. Bush."
41) CBS News also covered conservatives' fury over the 2009 Obama DHS report.

DHS Report Warns Of Right Wing ExtremistsBloggers Complain That Report, Which Suggests Recession And Election Could Spur Extremism, Is Anti-Conservative Propagandahttps://www.cbsnews.com/news/dhs-report-warns-of-right-wing-extremists/
42) "One of the most embarrassingly shoddy pieces of propaganda I'd ever read out of DHS...(a) piece of crap." - Michelle Malkin
43) In response to the argument that DHS' stock in trade is these kinds of reports (it is not the FBI's), and further that DHS had written about the left-wing menace, @michellemalkin noted the key distinction: conservatives aren't a threat!
44) "Malkin writes in response that the previous reports 'have always been very specific in identifying the exact groups, causes, and targets of domestic terrorism.' In this report, she argues, there is no such specific threat –"
45) "and, she adds, 'no hackneyed left-wing stereotype of conservatives left behind.'"Can you believe what we are living through today?Can you believe this????
46) I used to work for DHS, and when @realJeffreyP mentioned the Napolitano connection, I was able to follow up on it. You can't blame a reporter for missing that. But anyone responsible would question the sources, the formatting, and the authorship (field for HQ).
47) OK then. But why pick Phoenix? Why say that the report was magically leaked from there?Again, Janet Napolitano: governor of Arizona 2003-2009.In charge during Fast and Furious - a scandal coordinated with DOJ.en.wikipedia.org/wiki/Janet_Nap…

48) You can read about Operation Fast and Furious here. This is the CNN version. 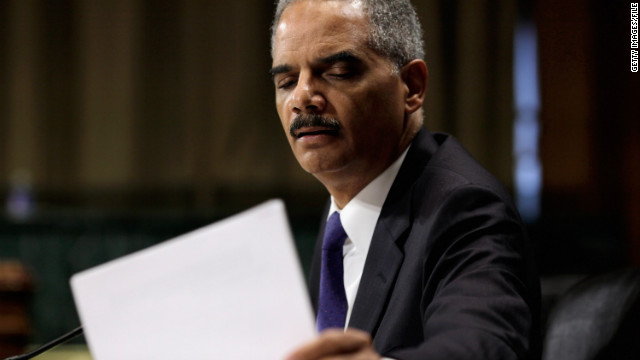 Operation Fast and Furious Fast FactsRead CNN's Fast Facts about Operation Fast and Furious, the ATF Phoenix Field Division's allowance of illegal gun sales to track sellers and purchasers.https://www.cnn.com/2013/08/27/world/americas/operation-fast-and-furious-fast-facts/index.html
49) What @CBSNews reported (bravo @SharylAttkisson who kept the heat on this story the whole time) was that the point of this scheme was to create crimes that would then have to be countered with gun control. 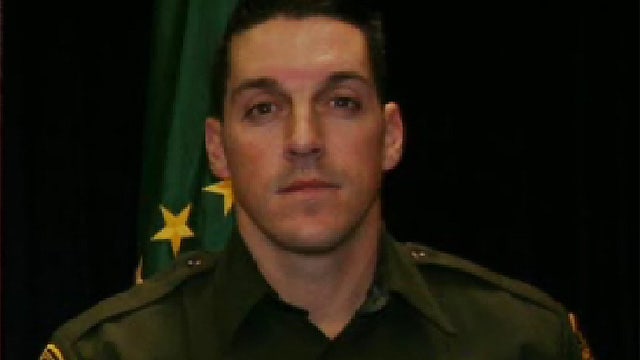 Border Agents Forced to Face Down Bullets With Bean Bags, Critics SayThe U.S. Border Patrol is under fire for allegedly ordering its elite, SWAT-style units to use non-lethal bean bag ammunition before responding with deadly force – even against suspects armed with hi…https://www.foxnews.com/us/border-agents-forced-to-face-down-bullets-with-bean-bags-critics-say

51) Janet Napolitano was also "coordinating" with those who made sure that Terry's killers had the guns they needed to kill him.

52) For the first time ever in the history of the United States, Congress held a sitting Cabinet official in contempt. Eric Holder.He would not provide them the requested documents in this case.

Holder held in contemptDozens of Democrats marched off the floor in protest during the vote.https://www.politico.com/story/2012/06/holder-held-in-contempt-of-congress-077988
53) Fast and Furious represented a total breakdown in the normal functioning of law enforcement - a breakdown "coordinated" within the Dept. of Justice and from DOJ to DHS.Where did that breakdown happen? Phoenix, Arizona.
54) "2 ATF agents: Our hands were tied, so guns walkedThey say prosecutors told them there was no basis for arrests"Tim Steller, Arizona Daily Star, 4/15/2012 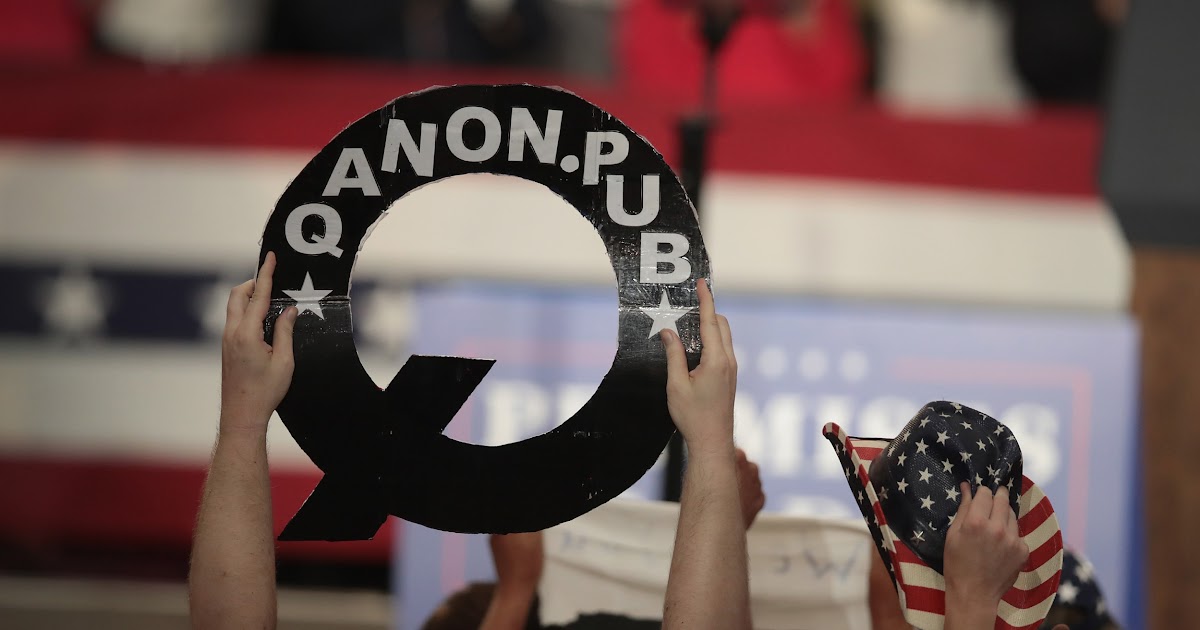