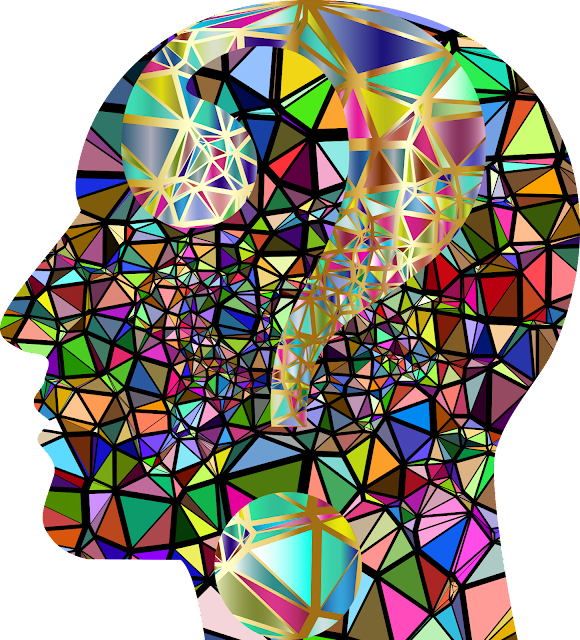 How do we understand our selves, in a world where our identity is perpetually divided up by others?

This image brings to my mind the MK-Ultra victim who is traumatized into having dissociated identity disorder so as to carry out the will of his or her captors.

Of course the survivor of MK-Ultra develops severe symptoms and is considered mentally ill (an individual problem) although we know that the illness is actually socially constructed and that the residue manifests in their brains.

In sociology when a person has a divided self we say they're experiencing role conflict. Here is a paper I wrote in 1999 when my kids were young and I was struggling with being a young wife, mom, and fledgling sociologist.

People who study this subject spend a lot of time trying to understand how the group constructs the mind of the individual. George Herbert Mead is the father of symbolic interactionism, which argues that we all have a real self (the "I") and a socially imposed constructed self (the "me").

The "I" and the "Me" are ever changing, as the "Me" becomes more integrated into the "I."

The changed "I" seeks new experiences and people or reacts differently.

This in turn changes our "Me."

R.D. Laing, a psychiatrist, understood that the sick society produces people who must insulate themselves from reality in order to function. In other words, they must develop non-real selves.

He said: “Insanity -- a perfectly rational adjustment to an insane world.”

The sick society is characterized by people who dehumanize those they interact with. The philosopher Martin Buber called this the "I-It" relationship.

If you are a thing, I don't care how many of you there are.

All these 9 people are human beings.

But in Hollywood they are numbered.

Makenna Berry describes the healthy alternative as Buber formulated it.

"In the I-Thou encounter, we relate to each other as authentic beings, without judgment, qualification, or objectification. I meet you as you are, and you meet me as who I am."

In the healthy society, people have one integral self.

The one integral self, or soul, travels through life, a learning journey.

There are ways of discerning whether the "stuff" we learn is true.

Sarah Ashcraft wrote a brilliant blog about this.

The world we live in right now is on the verge of a mental breakthrough.

We are about to take two completely distinct and opposing realities, and comprehend how they are actually one.

Because what we are seeing is not just one Jeffrey Epstein, but many.

And so we have to ask ourselves:

How is it possible for people to be normal, law-abiding, intelligent, respectable citizens during the day...& turn into monsters at night?

The sociologist Erving Goffman explained this dichotomy in his 1956 book The Presentation of the Self in Everyday Life. (Summary)

Karl Thompson explains Goffman's theory: "In the social world we are called upon to put on various fronts depending on the social stage on which we find ourselves and the teams of actors with whom we are performing."

"On these social stages we take on roles, in relation to other team-members and carefully manage the impressions we give-off in order to ‘fit in’ to society and/ or achieve our own personal goals."

"Impression management involves projecting an ‘idealised image’ of ourselves, which involves concealing a number of aspects of a performance – such as the effort which goes into putting on a front, and typically hiding any personal profit we will gain"

"Acting out social roles is quite demanding and so in addition to the front-stage aspect of our lives, we also have back-stage areas where we can drop our front and be more relaxed, closer to our ‘true-selves’, and where we can prepare for our acting in the world."

So if you think about "Mad Men," which was set in the same era, it was all about putting on the show. 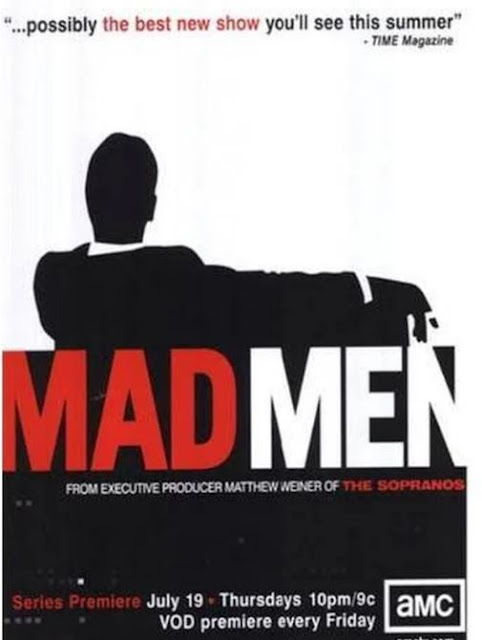 But behind the scenes...

As epitomized in "Revolutionary Road." 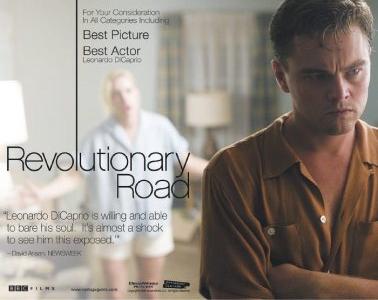 The fundamental assumption of American public life, until the election of President Trump, was that a public figure must have a "persona."

The problem with the "persona" approach to life is that there has to be a back-stage behind which the steam is released, the secrets are kept, and so on.

A former Prime Minister of Israel, Menachem Begin, suffered from depression so bad he actually wound up resigning.

The Begin Heritage Center (sort of like a Presidential Library here in the States) was very not happy that this came out.

We don't really think about this a lot, but it has always been taken for granted that public officials did not just talk to the public. Instead they relied on talking points, which are not at all the same thing.

"Talking points" are the same as a movie script.

You're not supposed to go "off topic".

If you're asked a question "off topic," you're supposed to ignore it and just stick with what is written down for you.

Talking points are notoriously stale and boring, which is why I always go off-topic, and I encourage other people to do so as well.

The main thing is to engage the audience with the truth.

His approval rating is remarkable for a man who does not need his truth written by committee, interest groups, or best friends.

President Trump's popularity was foreshadowed by a book called The Cluetrain Manifesto (2000), which was all about the upheaval that social media would bring to the markets, because social media represents real conversations between "I" and "Thou."

The real reason Hillary lost the campaign, in my personal opinion, is the same reason Establishment words (Democratic or Republican) don't resonate with people.

They just seem so fake.

In 2016, people used the word "refreshing" a lot to describe Donald Trump. "I don't know if I agree with everything he says, but he's just so REFRESHING." 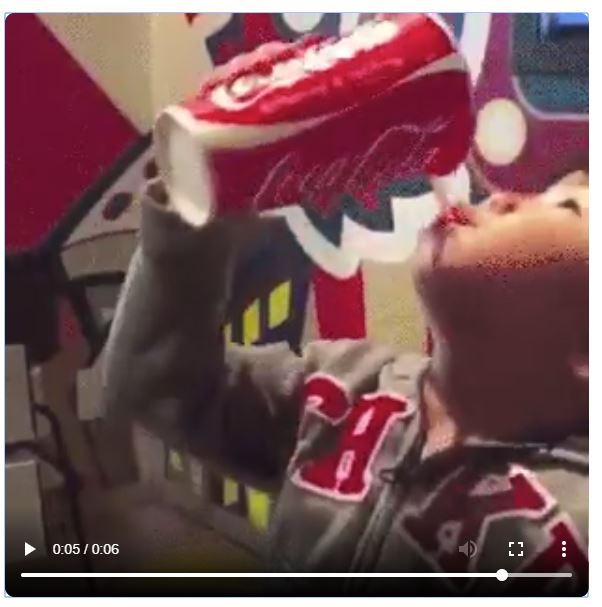 Trump was refreshing because for the first time, we didn't have to sit there and listen to a politician lying.

(And I know the haters will get on here and say yes he's a liar...you're a cultist...but please. We aren't being literal.)

The strain is compounded exponentially for every instance of role conflict you have - significant other, professional work environment, friendship group, and so on.

As an example, I think of the social stigma around openly telling synagogue people I support President Trump.

It is the social stigma around openly telling my Federal colleagues that I believe we are in the midst of a coup, and seditious conspiracy surrounds us.

Since there is no answer to that, one "reprimand" was to send a link to my Gab profile.

The entire phenomenon of anonymous speech on social media, including on Twitter (where this post was first shared), exists for two basic reasons.
And now we get to child sex trafficking, which is the real concern for many of us, including me.

The sick society depends fundamentally on having an active supply of children to abuse.

Who is the dog in most scenarios?

The abuser presents a composed face to the world.

But they are barely holding it together.

And there is something about the presence of that innocent, vulnerable child - it brings out the worst in the sadist.

Now, picture the aristocrat. Gigantic ego. Gigantic pressure. They have to hold it together. Nobody can see what is building up inside.

It never satisfies that beast.

But what happens to the victim?

Pain becomes dissociation becomes splitting into a thousand different selves, egged on by the handler who wants that mind in different rooms, each one with a purpose.

Victims trained to have many minds are useful as spies.

Their trainers are absolutely ruthless and have no conscience at all.

The abuse victim who is trafficked as a combined rape-victim-for-hire and message-deliverer enables the psychotically split society to function.

Like Cathy O'Brien - she can get word where it needs to go.

She can facilitate any operation.

People whose minds are inherently humanistic ("I-Thou"), who cannot relate to others as things (or whose programming is broken), are a threat to the social order as it has been from time immemorial.

There is no secret cabal necessary here.

Traditional, psychotic leaders are split between "public (benevolent)" and "private (murderous)" self.

They therefore can't have strong, self-contained, SOVEREIGN (to borrow the word from Sarah Ashcraft and Chris Cronsell) humans running around free.

And this is why Tracy Twyman is dead.

Because she stood up to the psychotics and studied their ways.

Tracy turned the SUBJECT into an OBJECT of study.

She stripped them of their all-encompassing power - just a bit.

And for that she had to pay the ultimate price.

I've lost count of all the dead journalists and researchers by now.

The seemingly unending list of "way too soon" deaths, seemingly without retribution, is a warning sign to the rest of us, and the warning sign is very effective.

In the world we live in right now, every moment of freedom is inexpressibly precious air.

This is how the bad guys want to see us - restrained and submissive and afraid.

And so they will try, to the very end, to fracture our selves and divide us, stressed out within our bodies and minds, psychologically distant and hateful from one to another.

For this reason, war is a lie.

And the end of this terrible war will come when we unite to save the children.

By Dr. Dannielle Blumenthal. All opinions are the author's own. Public domain.
- July 12, 2019