1) OK just for the sake of the hygiene of the threads, let me do this first one to explain what's going on with the Jewish research, my feelings about it, and what led me to consider doing this as Twitter threads first.
2) To make a long story short, as young people both my husband and I were targeted by rabbis who were perverted.
3) We have both written about it. We were both extremely fortunate.
4) In my case, I have no memory of the situation except for a snippet. I can't remember anything except that small snippet, and what I can recall would not be considered criminal behavior.
5) But I know that it was not nothing, and this is because another victim came to me from halfway around the world when I wrote about it. It's because my father told me the man was a known pervert. And it's because this pervert reportedly said something sick about me, as a 9 yo.
6) In my husband's case, I know it was not nothing because after he wrote about what happened to him, gigantic scandals blew up, and not one but multiple scandals, and fortunately my husband screamed when one of the predators tried something.
7) We are both survivors of the trauma of perverted rabbis, which is an especially depressing form of trauma, because these are the people who are supposed to be Godly and they are satanic.
8) But what was worse than what they did, as many people say, was the reaction.
9) In a nutshell, instead of racing to protect the children, the rabbis and their enablers rush to protect the predators.
10) When a child experiences that kind of treatment, they become suffused with a sense of guilt and shame. That is what happened to me. A once confident and outgoing person, I became a shell of myself.
11) We try to go on, and we try to adapt, and let's fast forward 30 years to about 2008 when I learned of the most horrific abuse case I could imagine.
12) The case involved a young boy in the mikvah, the ritual bath, who was being violated by a man in the most casual way, and a rabbi had to literally lift the child off the man as he was being violated. Vice News wrote about it when Vice was normal.
13) My apologies, this case was written about in 2013.

The Child-Rape Assembly LineRabbi Nuchem Rosenberg—who is 63 with a long, graying beard—recently sat down with me to explain what he described as a "child-rape assembly line" among sects of fundamentalist Jews.https://www.vice.com/en_us/article/qbe8bp/the-child-rape-assembly-line-0000141-v20n11
14) Also in 2013 a Hasidic man was thrown in jail for 103 years for brutally sexually abusing a girl over an extended period of time. 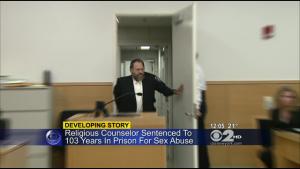 Orthodox Counselor Nechemya Weberman Gets 103 Years In Sex Abuse CaseOrthodox Counselor Nechemya Weberman Gets 103 Years In Sex Abuse Casehttps://newyork.cbslocal.com/video/2747807-orthodox-counselor-nechemya-weberman-gets-103-years-in-sex-abuse-case/
15) It is bad enough that such things happen as an anomaly, but the truth is that they are not an anomaly, and this is why the advocates for the victims were attacked, harassed, ostracised, threatened, and so on.
16) I had been reading about this stuff for years before 2013. I don't know when I started exactly, only that there were years of whistleblower blogs, like this one, as well as blogs that had no names attached at all.

FailedMessiah.com©2004 – 2009 FailedMessiah.com"Silence encourages the tormentor, never the tormented." – Elie Weisel "The seal of G-d is Truth." – Rabbi Hanina, Babylonian Talmud Sanhedrin 64ahttps://failedmessiah.typepad.com/failed_messiahcom/archives.html
17) In my mind I thought to myself, "It's like the Catholic Church" more than a few times, but then I thought to myself, "it can't be like the Catholic Church, because that was institutionalized, systematic child abuse - like child sex trafficking."
I was in complete denial.
18) Even when I read this book by Michael Lesher, an Orthodox Jewish lawyer and child advocate, who conclusively proved the systematic nature of these crimes, I was in denial.
amazon.com/Sexual-Shonda-…
19) And definitely when I saw SRA survivor Vicki Polin on Oprah (1989), and she said her family practiced satanic rituals in the synagogue, I told myself that SHE IS CRAZY. 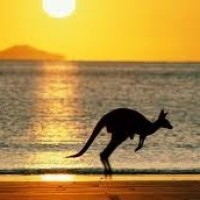 The Awareness CenterUpcoming Holidays August information on August holidays 8/1 Lamas/Lughnasadh 8/7 Full Moon 8/7 Partial lunar eclipse: visible in most of Europe, most of Asia, Australia, Africa, and eastern South A…https://ritualabuse.wordpress.com/2017/07/30/the-awareness-center/
20) You guys know I have been doing this research into Pizzagate and related matters for 3 years now. Add that to the Jewish research I mentioned, and the research I have not mentioned, and my experience and that of my husband - AND I STILL CANNOT COPE WITH WHAT I AM READING.
21) So if I am having this level of cognitive dissonance, I know that the Jewish community is having this level of cognitive dissonance times a million.
It can't be us!
We are the chosen people!
We are the holy few!
22) For many, many years, these are the kinds of reactions that victim advocates got from the religious Jewish community. In no particular order.
23) Why are you so preoccupied with these things? You must enjoy it.
24) You're disgusting.
25) Maybe you secretly want to hurt children and this is your way of coping with your own worst impulses.
26) You are insane.
27) Do you realize what you're saying?
28) You weren't there. You don't know what happened.
29) You're going to provoke anti-Semitism. Isn't one Holocaust enough?
30) This is a troubled child. Everybody knows that.
31) The child had a bad dream. And they're going to ruin this good man's life!
32) The man has a family!
33) Women don't abuse kids. Everyone knows that.
34) You better be careful.
35) You better shut your mouth or it will be impossible for your child to get a shidduch (good marriage match).
36) Not to mention - "gossip is a sin"
37) Also not to mention - "the secret police came after the Jews so many times, you're going to make the goyim (gentiles) target us"
38) If this isn't enough, load onto the above that I feel a great love for my people and my faith and I don't want to hurt them. I fear that saying anything about what's going on will lead to my receiving some sort of karmic punishment.
I know that sounds crazy, but it's there.
39) If there is anything I pride myself on it is loyalty. I think to myself, how can a loyal Jew say such things to the non-Jewish world?
Here is my reasoning.
40) As a researcher it is my estimation that the Orthodox Jewish community is guilty of child sex trafficking in its purest sense. The community knowingly procured child after child for rape and sexual assault by so-called religious leaders.
This is a heinous crime.
41) There is a moral responsibility that a person has to humanity that goes beyond any sense of tribal loyalty.
42) It is not possible anymore to claim ignorance. There are voluminous victims' accounts available on the public internet. These people do not know each other. They make the same claims over a period of decades.
43) There is no such thing as a religion that involves raping children.
44) From what I can tell, the victims of rabbinic pedophilia and child sex trafficking are Jewish themselves. Where is the moral obligation to them, in all the worries about making the community look bad?
What has the community done to stop this heinous crime from happening?
45) Pedophilia is illegal under Jewish law.
talmud.faithweb.com/articles/three…
46) Human trafficking is punishable by death under Jewish law.
ou.org/torah/mitzvot/…
47) However, rabbis are culpable for knowing and covering up rampant pedophilia in the religious community. Their failure to condemn and insensitive lectures at best also act to promote it.
dannielleblumenthal.com/2019/07/orthod…
48) The ultra-Orthodox opposed the Child Victims Act in New York, which extended the statute of limitations on reporting so that victims could obtain restitution. They were more worried about looking bad and going bankrupt than about victims. 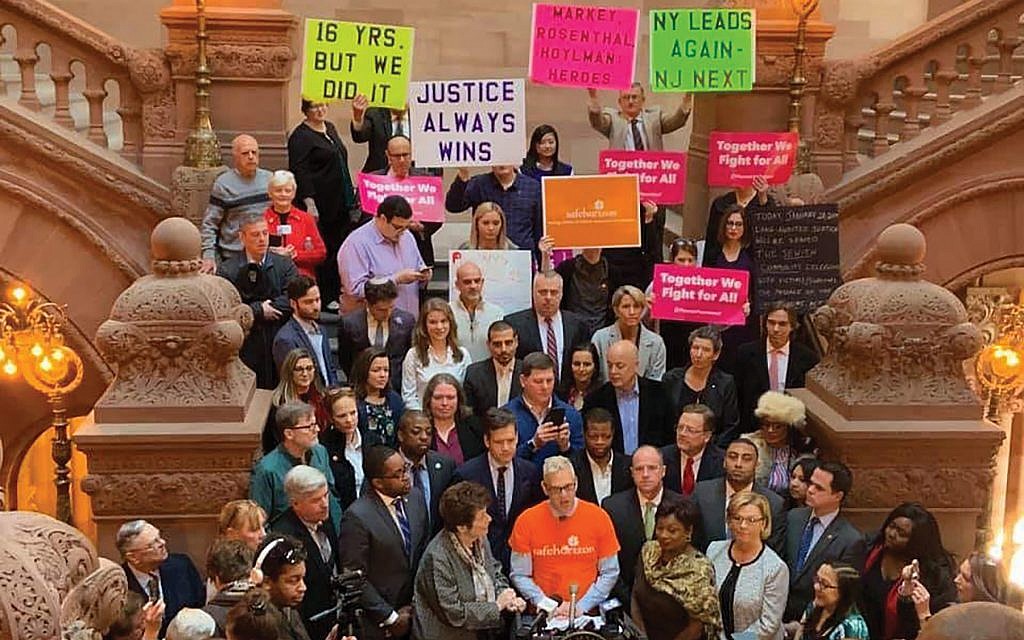 ‘Real Fears’ Over Child Victims Act, Say CharedimSurvivors and advocates say continued Orthodox opposition is meant as signal of intimidation.https://jewishweek.timesofisrael.com/real-fears-over-child-victims-act-say-charedim/
49) Research shows a correlation between being sexually abused and leaving the faith.

Study finds widespread history of sexual abuse among formerly Orthodox“This report supports the anecdotal evidence I’ve seen that indicates a close link between abuse in a religious context and the subsequent rejection of that community."https://www.jpost.com/Diaspora/Study-finds-widespread-history-of-sexual-abuse-among-formerly-Orthodox-562937
50) Numerous articles and stories bear out the underreporting in the Orthodox community, which is caused by a desperate need to cover up.
dannielleblumenthal.com/2019/07/the-on…
51) I think I'm going to end this here for now, because it's a lot.
Thank you for reading.
(End.)
___________
By Dr. Dannielle Blumenthal. All opinions are the author's own. Public domain.
- July 26, 2019