The First Voter Poll On Q

This is an important poll because here we have a leftist organization polling voters about Q, and general political issues.

Despite all the fake news, solidly 40% support the Administration's handling of migrants (including children) brought to the country illegally.

Slightly less than half approve of how @POTUS is handling North Korea and a majority agree with the nuclear talks.

And now we get to #QAnon.

This number is remarkable, because 540 DON'T EVEN KNOW WHAT Q IS!

What news media are they watching? They're not Fox News freaks, and they're not about MSNBC, either. 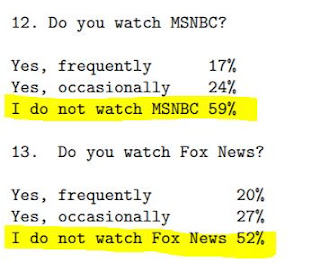 "Do you believe that the QAnon theory about a conspiracy among deep state elites is true?"

Well, the Democrats are all reading Q!

Interestingly, though predictably Republicans are most likely to support Q, 42% don't even know what Q is.

There is no correlation between your gender and your likelihood of believing that Q is real.

Much older people are significantly more likely to believe that Q is very true.

Could it be because they have life experience?

White people are twice as likely as Black people to believe that Q is very true, but otherwise there's not much difference here based on race or culture. (When there's a difference of 10 percentage points, it's very significant.)

Now this is interesting. Before we saw that the less college you have, the more you support POTUS.

Q support appears to be an independent phenomenon. Among those likely to believe strongly, there is no correlation to educational level - it's 30% of Ph.D.s & non Ph.D.s alike.

Where you live is irrelevant.

Fox viewers - they're on both sides of the spectrum, most likely to believe Q is very true, but also most likely never to have heard of Q. Which suggests that there are different types of Fox viewers and customer segmentation is needed.

MSNBC viewers - especially vehement about Q not being true.

So to me this means, this is the Deep State itself, and they are in a panic.

Again, the results of the survey are available here:
https://civiqs.com/documents/Civiqs_DailyKos_monthly_banner_book_2019_07.pdf
___________

By Dr. Dannielle Blumenthal. All opinions are the author's own. Public domain.
- July 23, 2019