Stopping The Exploding Border Crisis At Its Source 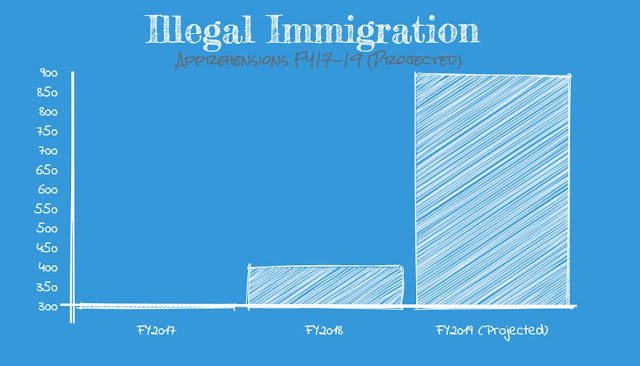 The problem with trying to measure illegal immigration is obvious: You don't know how many crossers you did NOT intercept.  Therefore, the government relies on trends. Over the past decade, the trend has been for the numbers to decline. However, between FY2017 and FY2019, the numbers have risen sharply, per U.S. Customs and Border Protection.
We share a planet, and any discussion of policy should begin with that basic human fact.
However, rational sharing takes place in a rational manner, one in which there are rules by which both sides abide.

Along these lines, finally there is mainstream recognition of the crisis at the southern border. after repeated denials and attempts to call it "manufactured."

In late March 2019, Acting Department of Homeland Security Chief Kevin McAleenan said we had reached "the breaking point." Vice-President Pence, in late June, said that DHS is "overwhelmed" and needs Congress to provide funding to handle it.

The U.S. strategy for dealing with uncontrolled and uncontrollable illegal migration is to stop the problem at the source, as Acting Department of Homeland Security Secretary Kevin McAleenan mentioned in his press conference on June 28, 2019.

Mexico is the source, either directly or as a middleman between countries further south and the United States.

The Mexican police had to get involved.

Obrador sent the Mexican police and the Mexican National Guard to the border to stop the smuggling. (Note in this photo that the adult and child do not resemble one another.)

The Mexican police are resisting. Per the Washington Times: "Government officials blamed the political opposition, corrupt federal police and outside players Thursday for a revolt by officers who are opposed to being absorbed into Mexico’s new National Guard."

An unsourced, anonymous message on the "Godlike Productions" forum states:


"Soros bought off the Federal police - paying them to not follow the president's orders. As a result, Obrador is going to rip away all their benefits, reduce their pay, and merge them with the National Guard....The Federal Police are saying HELL NO, and blocking roads and creating chaos, but...Obrador has this in the bag. The once highly paid police force is now going to be sleeping in tents rather than posh hotels, & their pay is going to be cut ENORMOUSLY."

The message poster notes that the media attacks Obrador just as they do President Trump, and he is even blamed for talking to our President! Al Jazeera:

"US President Donald Trump threatened to impose tariffs on Mexico if Lopez Obrador doesn't halt illegal migration to the US by June 10 - a move that stressed the relationship between both countries. Obrador Lopez sent Trump a letter calling for the avoidance of confrontation, and Friday morning, he said he would respond to Trump's threats with "great prudence", sending off his finance minister to negotiate with Washington.
In response, markets in both countries reacted, stocks tumbled and the Mexican peso lost value against the US dollar."

Nevertheless, this anonymous source believes that the strategy we are currently employing with Mexico to stop the flow of illegal aliens will ultimately work:

"PREDICTION: The border is gonna become an abandoned zone. From the Mexican side. The migrant crisis will be over soon. Obrador is NOT CORRUPTIBLE."

In the end, let's hope that the border crisis disappears, along with the corruption that declared it a non-story until it became politically expedient to reverse course.
___________

By Dr. Dannielle Blumenthal. All opinions are the author's own and do not represent her employer or any other entity. Public domain.
- July 05, 2019