Border Patrol "Secret Group" On Facebook - A Hoax? No, But It May Have Been Infiltrated (Update 2 7/3/2019 With The CBP Standards Of Conduct)

The most shocking item in the article is an image of President Trump pushing a woman's face down on his crotch as though to force her into performing a sexual act. The woman is clearly supposed to be Representative Alexandria Ocasio-Cortez. The image is pornographic and I am not going to reproduce it here.

The article prompted an immediate wave of shock and disgust. I called it an "indefensible disgrace to the uniform" and said "people need to be fired." The Cut, an online women's magazine, called it "horrific." GovExec.com published it as a top headline. TechCrunch said the group is "brimming with hate." CNN called it "cruel, lewd."

Here's the problem: Everyone reacted viscerally. Nobody questioned whether this so-called "secret group," which conveniently bolstered the narrative that DHS/CBP/Border Patrol/ICE agents are evil criminals, was actually authentic or not. Nobody questioned the convenient sympathy such an article would generate for Alexandria Ocasio-Cortez, caught preening before an empty parking lot as though crying at the fate of migrants held in detention.

For its part, CBP  and the Border Patrol immediately took responsibility for looking into it.

Is ProPublica fake news? It has a good reputation, but it is somewhat left-biased ("left-center"). It was founded by the Sandler Foundation (think Herb Sandler as in the Podesta emails - "Give notice when changing strategies; "Square cloth handkerchief")

ProPublica does receive funding from George Soros' Open Society Foundation (they say "less than 2%"). And one major investor is the founder of Craigslist, historically used for child sex trafficking and adult prostitution which only recently stopped posting sex ads. (To be fair, the FBI did give Newmark an award a few years ago for helping to stop child trafficking.) Other major investors include the respected Knight Foundation and the MacArthur Foundation.

Here are some of the concerns I have with their article.

1. They use a screenshot from Occupy Democrats, which Trump supporters would not do. (Update: The group is real, per the Border Patrol Union (see below), but open to the public. So this could be someone who infiltrated the group to create a negative impression.) 2. They portray President Trump as a sexual abuser. (See article.) Again, law enforcement officers who are Trump supporters logically would not do this. (See #1.)

3. The name of the group sounds like a pedophile group - "I'm 10-15" - even though they claim this is a Border Patrol code. (Update: The name is authentic.)

5. The language used in the article does not sound like the way I recall Border Patrol agents speaking.

6. Border Patrol has for many years spent extensive time and money training agents to save border crossers.

7. The Border Patrol does not have an issue that I know of with female disempowerment. There is no evidence of this and ProPublica did not check.

8. There is a reference to "the family," which sounds a lot like the "Children of God," also known as "The Family," which is a child sex trafficking cult. (Update: This is authentic.)

9. Alexandria Ocasio-Cortez today claimed that Border Patrol agents stick women's heads in toilets if they want to drink water, but witnesses said she screamed at agents "in a threatening manner" and refused the tour.

10. There is no countervailing evidence provided in the article to suggest that perhaps the allegations are incorrect, or pending investigation. There is not even a quote from the Border Patrol itself. How much time did they get to respond?

The National Border Patrol Council confirms this group is real, but notes it is open to the public; only a few offensive posts were found; and that ProPublica essentially smeared the Border Patrol’s reputation by publishing them as though they were representative of the culture.
https://bpunion.org/featured/national-border-patrol-council-nbpc-issues-statement-on-pro-publica-news-article-regarding-facebook-group-im-10-15/

Update 7/3/2019, 12:16 a.m.
Thanks to Twitter user Melissa Murray (@mjmissy) for reminding me to check the CBP Standards of Conduct for employees. I find it hard to believe that Border Patrol agents would risk losing their jobs over some vulgar Facebook posts. It is more plausible that political fraudsters infiltrated the social media group and pretended to be vulgar Border Patrol agents. 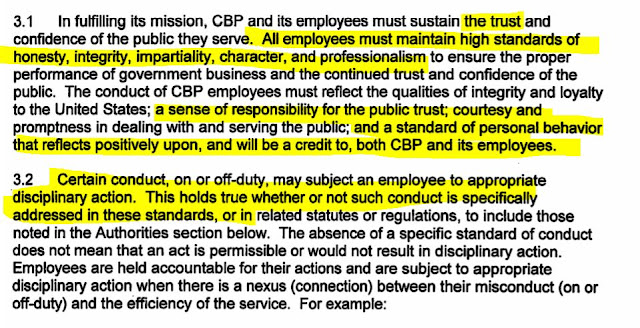