Subconscious Themes Of Control In A Whitney Houston Video

1) I loved Whitney Houston.This is a very brief thread to talk about how she was hurt and abused.en.wikipedia.org/wiki/Whitney_H… Dionne Warwick Denies Allegations That Her Sister Molested Whitney HoustonDionne Warwick appeared on 'Larry King Now.' Dionne called the allegations that her sister Dee Dee sexual abused Whitney Houston "hogwash."https://www.okayplayer.com/music/dionne-warwick-dee-dee-warwick-whitney-houston-larry-king-now-interview.html
6) If it is true that Houston was abused, it set the stage for her to be exploited further later on.(I will have to pick this thread up at lunch.)
7) Picking up on the #WhitneyHouston thread.
8) This article by @MASTERRAIMHOTEP shows how her life could fit into the occult "script". It is very detailed. This does not make it true, but it could be true, and I just wanted to highlight how we could interpret one of her music videos accordingly.

Whitney Houston’s Death and The Secret-Society, Called The Music IndustryI was asked by a family member, who knows I’m an occult researcher, to look into Whitney Houston’s death, as being a sacrifice. Now, I don’t usually do too many articles on the Illuminati and their…https://occultandmusic.wordpress.com/2012/02/12/whitney-houstons-death-and-the-secret-society-called-the-music-industry/
9) The key point about the article, for me, is that Whitney was a deeply God-fearing person and as such they had to ruin her.
10) This would be on top of any existing trauma she might already have suffered.
11) Dramatic success followed by a deep dive into failure is the type of headline that gets readers.
A Whitney Houston Investigation: The Long, Sad Road to her Beverly Hilton DeathWhat led the pop sensation, instead, to her death in a Beverly Hilton bathtub on February 11? Mark Seal investigates, exploring Houston’s toxic choices and tragic final days.https://www.vanityfair.com/hollywood/2012/06/whitney-houston-death-bathtub-drugs-rehab
12) Young Whitney Houston.

14) Themes of mind control in Whitney Houston videos.Someone previously provided a few. I'm not sure which video they were analyzing because it's been removed.kanyetothe.com/forum/index.ph…

15) But we do see a few in this video, and that's what I want to talk about for a couple of minutes.
16) The key thing to note is that a mind-control victim is not performing. They are actually dissociated from reality. The fact that their personality is split, means we are following a fragment when we watch a celebrity - not a whole person. (Obviously.)amazon.com/Illuminati-for…

18) I will pick this up later, God willing, to show how this is not the case in this video.
19) Re-sharing the video.
20) Using my short break to finish this up. So as we were saying, if the song "I Wanna Dance With Somebody" is about loneliness, we would expect some themes showing Whitney finding love.
21) Instead, we get a completely different narrative, superimposed upon the first. You have to visually inspect the symbols in succession to understand the story they are subconsciously conveying.
22) The video opens with a cheering crowd. I say to myself...maybe this means that Whitney is a successful singer, and that's why she's lonely...career orientation makes it hard to form relationships.

23) The next image reinforces this. Here is Whitney, with her prize - the great career.

24) The next thing we get is hypnotic clapping. The black and white turns to color. We see a diamond ring, well-groomed nails.

27) Notice that Whitney is wearing a necklace with a cross. (I've highlighted it.) Here she looks demure and nice, but a little shleppy.

28) Cut to long-haired, low-cut-neckline versioin, with no cross. No religion anymore.

29) Jumping around in a black outfit with a bright red ruffle. Black and red, death and blood. The devil.

30) Jumping in a hyper way - ecstatic - maybe on drugs.
31) The color - hyper-soaked. The screen - indicating prison, imprisonment, a cage, a screen, two realities. The man dancing on command. She is the master, he is the slave.

32) The pink changes to green and again someone is dancing on command. She is in the seated power pose. Another day, another guy.

34) "When the night falls, my loneliness calls..."Could it be that the devil calls her at night? That it's the other way around?

35) Multiple screens, multiple personalities - who will come out the door next? They're interchangeable.

36) Now she is behind the screen or gate. A shift in power dynamics, now she is the slave in the cage.

37) The leopard scarf is a symbol of "beta" programming - the person who is used for their sexuality.

38) Here is an article on that.More in a few hours. 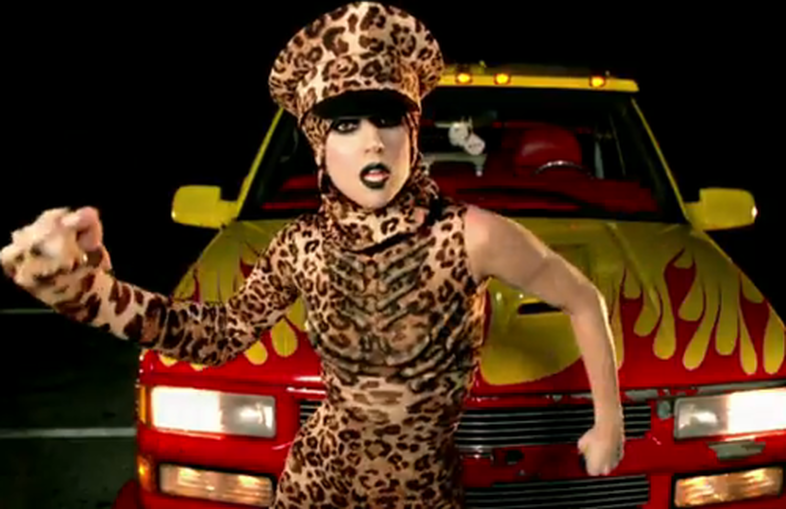 Monarch/MK Ultra-Sex Kitten Programming: Occult SymbolismDirect Downloadshttps://www.nicholson1968.com/nicholson1968s-post/sex-kitten-programming-occult-symbolism-katy-perry
39) The command, “Dance!” sounds like a master commanding a slave the way Whitney sings it. In case we haven’t gotten the memo, there is a blinking neon sign that looks like a motel-prostitute place.

40) Here we have the obligatory black and white checkerboard which is a telltale sign of mind programming.

41) Whitney is pictured here dancing with an invisible partner on this checkerboard - which is to say, the person or entity which controls her.

42) When she “asks” the man to dance, she has to beat him up - literally shaking him - to get him to do it.This seems like violence she is experiencing, but portrayed in the reverse. There is nothing romantic about it.

43) Now we have Whitney and the man behind the cage. Both are trapped.

44) Whitney is framed by the “motel” prostitute sign, with a chain link prison motif in front of it.She is surrounded by admiring suitors...or are they actually men who have paid for her services at the motel? (The men who back her success financially and control her.)

45) The physical violence shots occur when she is wearing the devil’s colors. She is portrayed as the aggressor...because we don’t want to see that it’s really the reverse.

46) The graffiti fence indicates a bad neighborhood. The men are admiring her, or are they leering as she goes by? Does her participation in this music enterprise keep her away from them?

47) She has the bright lights of celebrity on her only so long as she obeys her handlers.

48) Is Whitney, Whitney anymore? Her identity is semi-transparent.

49) But she is happy. She is oh so, oh so happy. I thought she wanted to dance with someone who loves her? Not dance *for* the customers?

50) A close-up on her skinny, little-girl legs in the dressing room. In the video they quaver - as if with excitement, but really, I think, to signify fear.

51) This motif of the coat rack is bizarre. It has pointy hooks and it’s shown spinning in her face. It looks like a weapon.

52) She wears the black and white outfit before the purple (Hivite - Phoenician - royalty) fabric backdrop. She pulls the chain to control the dancer.

53) She dumps the water all over him, showing that he is an exploited object in the reverse of the way this is usually done - to women in Whitney’s position - she is reminded that she is one step away from being a stripper.

54) But the audience extends its hands in supplication. If she does what they say, she is a “goddess.”

55) Notice the neon yellow glasses. She is always watched - she is under the gaze (power) of another, who studies her.

56) This black and white motif alludes to film. She is a music star, but whoever controls the music controls the videos and movies too.

60) I loved the real Whitney, and no matter what they did to her, her music and her light will always live on.(End.)