QAnon, The Elephant In The Room For Government Communicators

On Sunday, June 2, 2019, approximately 3 p.m. Eastern Daylight Time, Google’s Cloud service suffered an outage that affected Gmail, YouTube, Snapchat, and other more. The impact was extensive. According to The Verge, “Google’s own G Suite Status dashboardshowed problems with practically every single Google web service at one point, and Down Detector listed YouTube outage reports in a number of countries worldwide.”

Google provided a statement to The Verge blaming “high levels of network congestion in the eastern USA.”

But about half an hour later, a series of anonymous messages appeared online offering a different explanation – giving “Team Q” the credit.

Essentially, “Q” (or “QAnon” – an “anon” is an anonymous researcher who posts to message boards) is a provider of coded information updates. Q purports to be part of a team, and the nature of the updates makes it clear that we are being provided with military intelligence.

The messages, which began on October 28, 2017, are enthusiastically welcomed and believed by some while also being derided by others as not just fake, but “bizarre” and even dangerous.

Why Does Q Matter to Government Communicators?

For now, we are not debating who is correct about Q (full disclosure: I believe Q to be authentic). It is also not about debating whether Q is breaking the law or not (I believe counsel must have addressed this) or whether the communication strategy is desirable (I believe it is).

The point is that if the messages are authentic, and the point is to circumvent the “fake news,” they must be authorized by President Trump himself. As such, the implications for government communicators are enormous, since Q essentially is a “workaround” that leaves the administrative state both untouched and irrelevant.

How Important Is Q?

Clearly, the influence of Q is sizable. Over the past 6 months, the QMap.pub website, which reposts original messages from Q, has had 8.31 million total visits. A similar website, QAnon.pub, has had 2.89 million total visits in the same timeframe. Already, nearly a year ago, as of August 1, 2018, the New York Times noted that Q explanatory videos on YouTube had received “millions of views” and “the numbers of tweets out there are too numerous to count.”

What Is the Relevance Of The Google Outage?

When Google went down, people speculated as to the “real” reason. Some thought that the government was trying to “test the Internet kill switch.” Since I have been reading Q’s messages about Google, my first thought was about evidence. Q has repeatedly said that Google was used in Deep State operations. Therefore, I thought that perhaps the company was destroying evidence, and that if so, it would prove that Q had been accurate in the statements made many months prior.

Here is an excerpt from one sample message (all quoted), from August 14, 2018, which refers to “server routing – non-U.S. based” using “Gmail drafts.”

On June 2, 2019, someone claiming to be an anonymous Google employee started talking online shortly after the outage began, saying that Google had been attempting to destroy evidence and that “people are going to prison” as a result.

The first message was sent at 15:25:07 and the second was sent at 15:42:13, making for an interesting interval of 17 minutes (Q minutes) and 6 seconds. (I believe that this was unintentional, which makes it all the more eerie.) Here, I will refer to them as “anonymous Google employee” for the sake of convenience; obviously, they may not be who they say.

At 10:57 p.m. Eastern Daylight Time (D.C. local time) someone took a screenshot of the anonymous messages and responses and re-posted them to Twitter under the also anonymous handle @GeekRad.

Anonymous Google employee: “Google was attempting a massive move and archive of data in order to start an unheard of process of shutting down/destroying evidence. Team Q took down the entire IT Ops infrastructure. Google knows.”
15:29:30 ID:5ede26 (5), No. 6655450

On August 15, 2018, Q sent a message stating that the Deep State was communicating through PS/Xbox chat logs. (Note: this was not the first such message.) Less than one day later, on August 16, Xbox suffered a massive crash. See below.

!!mG7VJxZNCI
16 Aug 2018 - 12:16:35 PM
“Anyone have problems w/ their 'XBOX Live' accounts shortly after the drop yesterday?
[Purge]
How many coincidences before mathematically impossible?
Q"

But Anonymous Messages Are “Beneath Us”

At this point in history, trust in the media is at an “all-time low”. This may be for negative reasons, or because “data access has gotten better,” and citizens, being more informed (as well as more able to be broadcasters themselves, over social media), are also more discriminating about what they believe. Right now, it doesn’t really matter.

What does matter is that not only does Q have influence among the public, but it may actually be authentic. If so, and there is a whole “machine” behind the operation, then we have reached a new low in American history, a stage when anonymous and unaccountable information, presented in unsource-able screenshots, has greater credibility among many swaths of the public than journalists do – those professionals who occupy “the fourth estate.”

We have reached a time when the public has taken up the role of information validators—even to the point of debunking the credibility of the Mueller report, a $25 million+ taxpayer endeavor.

So: Rather than waste time attacking Q as well as the message board on which their messages are posted, if we want to be relevant as government communicators, we need to be aware and responsive to our environment.

This means it is time to start taking those messages seriously; engaging with the anonymous figures stepping forward to provide information supplemental to it; and admitting the reality rather than denying the presence of the elephant in the room.

Anonymous Google employee: “Google was attempting a massive move and archive of data in order to start an unheard of process of shutting down/destroying evidence. Team Q took down the entire IT Ops infrastructure. Google knows.”
15:29:30 ID:5ede26 (5), No. 6655450

Response: “Must have been quite an operation.”
"https://en.wikipedia.org/wiki/Google_data_centers
There’s no official data on how many servers there are in Google data centers, but Gartner estimated in a July 2016 report that Google at the time had 2.5 million servers. This number is always changing as the company expands capacity and refreshes its hardware. [1]”
(The poster goes on to list the locations of Google’s data centers in the USA, South America, Europe and Asia – from Wikipedia – ed.)
15:34:47 ID:5ede26 (5), No. 6655484 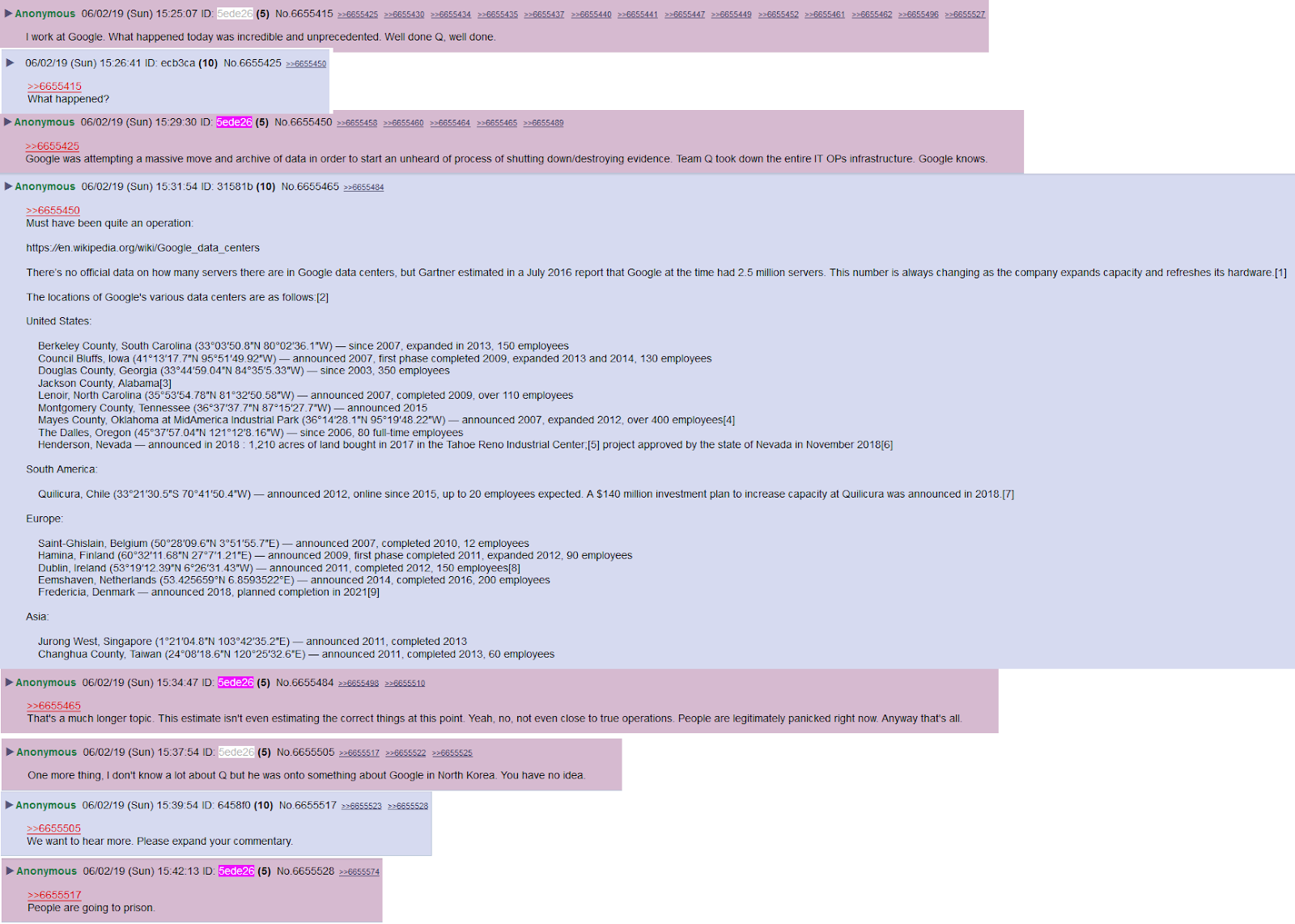 Opinions are the author’s own. Public domain. Free photo via Pixabay.