She says "assaulted," but also says her friends called it rape; it's been widely reported as a rape allegation; for this reason the word "rape" will be used here.

Carroll tells of an encounter with Trump, a stranger, at Bergdorf Goodman. Trump recognizes her vaguely, says Carroll; he is handsome; he asks for her help buying a present for a woman; he tells her he wants lingerie; he tells her she would look good in the lingerie; they go to the lingerie section, close the door to a dressing room, and he attacks her. She laughs the whole way through.

This would be an odd story in any event, because the victim freely admits that she consented to go with her "attacker" to an isolated place and laughed continually at what occurred there.

It gets even odder when you realize that Carroll has written up the plot of an episode of Law & Order Special Victims Unit, as Twitter user @thebradfordfile pointed out on June 25, 2019. 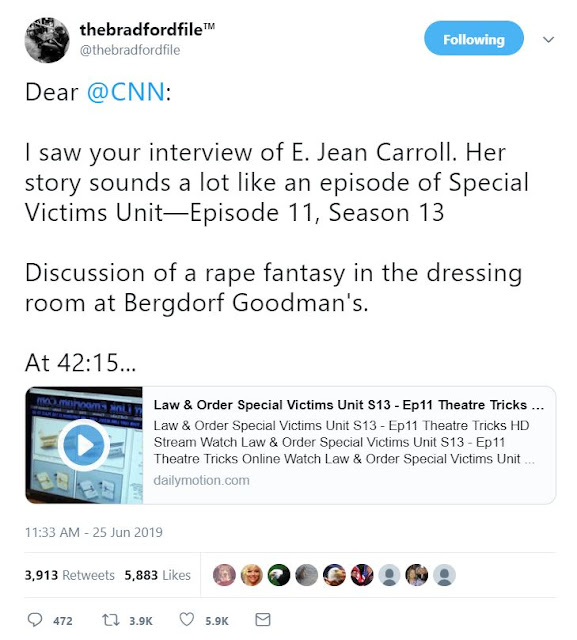 The episode is called "Theatre Tricks." It originally aired January 11, 2012. (I reviewed the episode on Amazon Prime Video here. Cast listing is here. Full episode recap here.) Here are some relevant quotes, beginning at approximately 35:00.
On Monday, June 24, Carroll did an interview about her allegation with CNN's Anderson Cooper that left him visibly shaken. 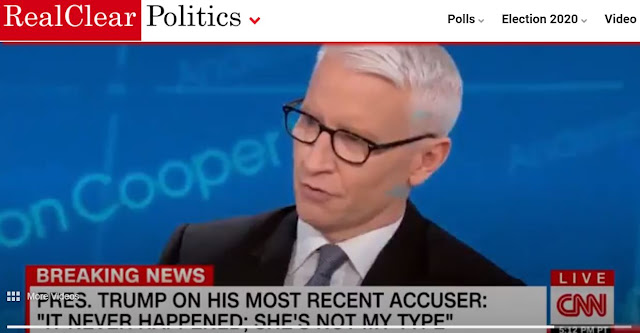 During this interview, Carroll stated: "I was not thrown on the ground and ravaged. The word rape carries so many sexual connotations. This was not sexual. It just hurt."

She added: "I think most people think of rape as being sexy. They think of the fantasies."
This led Cooper to cut abruptly to commercial.

Think about the plot of that SVU episode.
How is it possible that E. Jean Carroll was raped by Donald Trump in around 1995-1996 in exactly the same way as was written into an SVU episode which aired 18 years later?

It isn't, and Trump has vehemently denied the allegation. Nevertheless, the media has convicted him anyway.

Every publication has its bias. What is the point of view of The Cut, which published this?

The Wasserstein family owns New York Media, which owns The Cut and The New Yorker, along with other media properties including "Vulture."

The New Yorker is rated as "left-biased" by MediaBiasFactCheck.org, meaning: "Moderately to strongly biased toward liberal causes through story selection and/or political affiliation.  They may utilize strong loaded words (wording that attempts to influence an audience by using appeal to emotion or stereotypes), publish misleading reports and omit reporting of information that may damage liberal causes. Some sources in this category may be untrustworthy."

As of May 3, 2016, the fact-checker states that New York Magazine (its sister publication The Cut is not listed) is: "Left Biased, based on wording and story selection that mostly favors the left. We also rate them High for factual reporting due to proper sourcing of information and correcting a known failed fact check."

That's Grossman on the left. Oddly, though decades younger, she looks almost the same age as Marina Abramovic, pictured here on the cover of Dust magazine (Spring Summer 2013 edition). 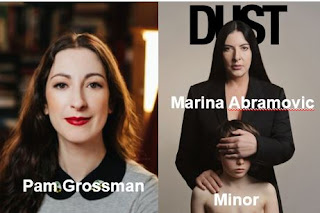 Do most people want to read about witches? I don't think so.

With the 5% downsizing the company announced that it was no longer on the sale block: The New York Post reported that "insiders were whipsawed by the cuts."

Maybe nobody wanted to buy the company? The firings occurred after "the company’s announcement in February" 2019, after a number of months, "that it is no longer up for sale."

Seems a number of mainstream media outlets, which do lean left, aren't doing well. MediaPost noted in late February 2019 that "BuzzFeed, Verizon Media, Gannett and Vice Media are among the media companies that have cut more than 2,200 jobs this year." In May 2019, 100 CNN employees took "voluntary buyouts."

Adweek calls this a "wrenching" period for the industry.

Maybe the industry would recover more quickly if it started telling real, textured stories again -- stories that feature in-depth critical analysis. And stopped trying to sell a satanic point of view.
___________
By Dr. Dannielle Blumenthal. All opinions are the author's own. Public domain.
- June 26, 2019