The Crisis Doesn't Have To Happen 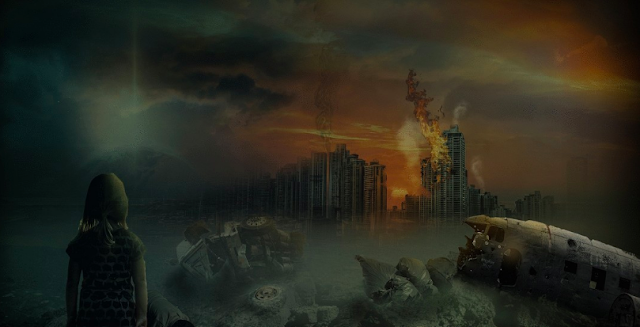 Yet the scene was alarming. Police officers patrolled briskly, all over the place. Police dogs were sniffing at the shoeshine stand by the Amtrak area, along the wall, and through where the passengers were sitting. A small group of people was huddled around the outlets in the corner; the police spoke to them briefly, and then the group broke up. A beautiful young woman in her twenties, a blanket wrapped around her shoulders, walked around blankly. Others ambled about; a pigeon had made its way into the Au Bon Pain and couldn't seem to get out.

I sat down, a little unnerved, and waited for the train to come. I looked up at the TV monitor, expecting to see the news or the weather. Instead, there was a loop of announcements about what to do in case a train or the station was evacuated. There were scenes of people freaking out on the train. Scenes of them walking to a single car to huddle. Scenes of them evacuating Union Station. I saw a woman on the screen, looking up somewhere near the ceiling, helplessly holding onto the handgrip of a wheelchair holding a frightened-looking man.

Clearly, someone is anticipating some kind attack. Nobody wants it to happen. And in an effort to avert disaster as best we humanly can, there is a coordinated effort on the law enforcement side to detect and disrupt any such incident, while giving people upfront the information they need to survive.

This, in my view, is the right kind of government communication. The crisis doesn't have to happen; we can integrate operations and information to ensure that the public is well-equipped to survive, as long as possible, in most foreseeable emergencies. But to achieve this kind of excellence across the board will require a level of unity.

The government must educate people about the real risks that confront them, the real capabilities we must marshal in order to be strong.

And not waste time and money on anything extraneous.

Copyright 2018 by Dr. Dannielle Blumenthal. All opinions are the author's own. Creative Commons (CC0) photo by lassaffa via Pixabay. This post is hereby released into the public domain.