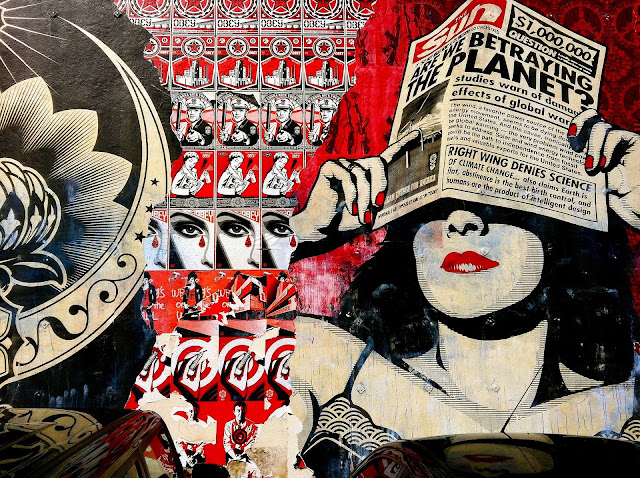 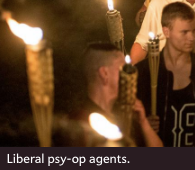 You said it, Slate, not me.

Have you noticed a pattern of late?

A person, or a group, commits a crime that is just in line with what the media's been telling us to think. And the movement that is supposed to "naturally" organize around it...somehow always falls flat.

Charlottesville was, supposedly, an organic hatefest by neo-Nazis against Jews. But I (a traumatized grandchild of Holocaust survivors) found the scene unconvincing.

Actual Nazis, as opposed to the assembled throng of probably-paid actors in Charlottesville, are diverse in their appearance (whoever staged this event was aping Richard Spencer, who sort of apes Hitler.) Female, not just male. Animated, not drones.

And, another thing.
If you spend any time actually listening to what White nationalists are saying (I'm not confident that Nazis is the right term), their concern is not at all what they chanted in Charlottesville - "Jews will not replace us."
As far as I can tell, White nationalists simply believe that many Jews are bad, and it's the ideology of political correctness they dispute (as epitomized in the slogan, "it's OK to be White.") A good example of a White nationalist is Paul Nehlen.  If you want to learn more, the New York Times has an excellent article on the distinction between White nationalists and White supremacists.

In any case, if you read anything at all about the current tactics of White nationalists, the focus is on achieving normative status (i.e., elected office). Not carrying tiki torches on a college campus.

#QAnon tells us to "read the map."

To a sociologist like me, maps are human networks.

McAuliffe is a friend of Hillary Clinton.

"According to the ACLU & reporters covering the rally, the violence escalated due to...intentional lack of police oversight, with the blame aimed squarely at Democratic Gov. Terry McAuliffe," reported WND.com.

"It’s almost as if they wanted us to fight each other.” a counter-protestor reportedly told CNN.

As a Jew it is incredibly offensive to me that anti-Semites such as Obama, Clinton, and George Soros invoke anti-Semitism to advance their own agendas. In the process, they make people actually hate Jews more -- something, sadly, we do enough of on our own.

Fortunately enough, these rabble-rousers are not all that intelligent.

Half of my ancestors are Hasidic.

Maybe all Hasidic Jews look alike to you, but even a 4 year old Hasid can tell that this is just a movie scene (Check out Menashe, a really good film.)

Anyone paying attention can clearly see what they're doing.

Remember Occupy Wall Street? One doesn't know whether to laugh at the stupidity or cry at the obviousness of the display, and at the mockery it made of truly authentic class-based activism.

Speaking of fake movements that exploit actual human problems, who funded Black Lives Matter and what is their aim?

Why does it always seem that movements claiming to speak for the Black community, also want to keep Black people in a total victim status?

Why do we have such a vocal anti-gun movement happening right now? Because of a school shooting where guns were needed to go in and stop the shooter. (And they use "Never Again," the Holocaust slogan...which cynical Jewish politician did that?)
Speaking of artificial gun-related activity, is there any truth to the allegation that U.S. government entities, at least at one time, intentionally flooded gang areas with firearms? What would be behind that, if true?

Believe me when I tell you I would rather spend my off-time having fun, than doing this stuff.

But it has become very clear to me: Much corruption is related. That is looks like a random set of colored puzzle pieces is intentional.

The idea is to keep the issues looking isolated, so we're off chasing our tails on this story and that.

The consumer (for that is what we are) of news is trapped in the Devil's whirlwind.

And if they don't distract you with news stories (cannily aimed to promote the policy of the day), well then of course you have celebrity "news."

Meanwhile, the really important questions only get teased at. Why does Mary-Kate Olsen do this kind of double-talk?  "I would never wish my upbringing on anyone... but I wouldn't take it back for the world."

Why is it that genuine peace-loving public figures always seem to get assassinated?

Why did the Rev. Dr. Martin Luther King Jr. have to die?

Who does it threaten when all the people want is peace?

Why do the very same people who tell our children to relinquish their God-given right to self-defense, also seem to take the bread out of their mouths so that they can fund a defense contractor's mortgage?

Whose fault is it that Libya has become one giant slave market?

Did you want an answer? Don't ask Obama.

Am I the only person who suspects that Obama's skin color and Hillary's gender were used in a cynical, exploitative fashion?

To gain the sympathy of the people and prevent genuine dissent?

To divide the people against each other, with accusations of -isms?

Who would make the kind of deals that keep a steady supply of children flowing into the hands of their tormentors?

Who would rather keep you preoccupied, so that you cannot stop and think about your circumstances?

Increasingly, our eyes are being opened to the truth. And it's a horrifying truth at that.

A great anger is rising up in the people. An anger that demands satisfaction. We are very, very close to the tipping point. (Note: I do NOT advocate extrajudicial violence.)

The time for justice is upon us now. Especially, justice for child traffickers.

As @POTUS @realDonaldTrump said (10/8/2012): "Got to do something about these missing children grabbed by the perverts. Too many incidents – fast trial, death penalty."

Copyright 2017 by Dr. Dannielle (Dossy) Blumenthal. All opinions are Dr. Blumenthal's own. This post is hereby released into the public domain. Cover photo by pexels via Pixabay (CC0 Creative Commons).
- March 17, 2018