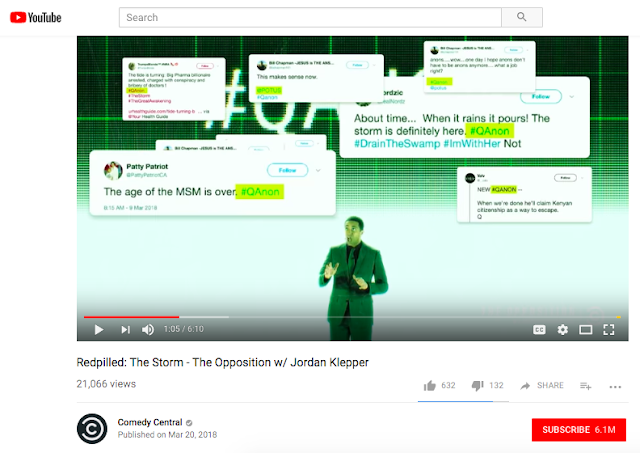 Originally posted on Twitter; lightly edited for typos and readability and to provide some additional commentary.

It should have been titled: "Deplorables: Aren't You Ashamed?"

And in the end, if "they" don't pull it off the air (because it didn't achieve the desired political intent but rather the opposite), this may very well be the moment that the mainstream begins to take seriously the "Drain the Swamp" theme that permeated President Trump's 2016 campaign.

What follows is a transcription of a March 20, 2018 sketch on Comedy Central's "The Opposition w/ Jordan Klepper." It was called "Redpilled: The Storm." Below, the transcription, followed by my "translation," then by personal commentary.

Narrator: "What if I told you the world is not as it seems, that what you think you know is wrong, that Matrix references are still cool?"

Translation: Somebody (not "us") is either crazy, out-of-touch, or stupid.


Narrator: "For conservatives on the Internet, the Matrix is shockingly still cool. You take the blue pill, and the story ends. You take the red pill, and we follow the white rabbit into 'The storm.'"

Translation: Conservatives follow #QAnon. They are either crazy, out of touch, or stupid.
We see words on the screen: "Redpilled: The Storm."

Translation: The words that mean "truth" to many people ("redpilled") actually mean "insanity" to "us," and we are now going to show you just how stupid these people are.


Narrator: "What is 'The storm'? A master conspiracy that's taking the Internet by - well, let's just say it's big."

Translation: These people are only stupid but also totally out of control.


Narrator: "Remember Pizzagate, the too-crazy-not-to-be-true conspiracy that started on the Internet but ended with a man shooting up a real pizza parlor with an AR-15?"

Translation: "Hillary keeps sex slaves in the basement of a pizzeria?"

Comments: "AR-15," "shooting up?" Talking points? Also, do you notice the wooden quality of the writing? This is the same problem Hillary had on the campaign trail. All of it sounds like a hideous reptilian, trying to mimic humanity.

Narrator: "The storm is similar, but some experts predict it's poised to have an even more explosive real-world impact."

Comment: The word "explosive" seems odd. Not a comedy word, and the FBI just announced an investigation into Q, based on the word "BOOM" appearing in one of its post, due to a possible connection with the recent and tragic bombings in Austin. Strange.

Comment #2: Let me also throw in here that I do not consider myself particularly "conservative." I'm not even sure what that means. I do know that "conservative" is a word that certain types of political types use. Hillary cultists, mostly. Who wrote this sketch, and why?

Narrator: "It's already spreading faster than Pizzagate. And it's big. So big, that the main hashtag associated with it (#QAnon) has been tweeted more than 5,000,000 times."

Translation: All these people are stupid, and there's a lot of them. You see how they need our help?
Comment: The real enemy here appears to be people who think for themselves, not a manufactured category called "conservative." Remember: Ivanka and Chelsea were friends; maybe they still are.

Comment #2: I agree with #QAnon's assertion: These people truly are stupid.


Narrator: "Even @seanhannity retweeted a post (note: from @prayingmedic) mentioning #QAnon, the shadowy figure at the center of the storm. And of course, this luminary (screen shows @RealAlexJones) is on board."

Translation: Our political enemies are helping these crazy people.
Here the sketch cuts to @RealAlexJones:

"A lot of what QAnon has said, I've already gotten separately from my White House sources, my Pentagon sources, and yes, this is happening, the storm is real." (Here, Jones is shown wildly gesticulating.)

Translation: We hate Alex Jones.
Comment: At this I am reminded of Sunday's episode of @TheWalkingDead and Simon's plan to "expunge" the good people left on Earth because they simply would not accept the rule of the bad people. Negan tried to convince them, but they wouldn't bow down.


Narrator: "Newsweek called it the biggest (fake - here the word fake is shown but not said) news story of 2018."


Narrator: "But what is the storm? The thesis is pretty simple."

Comment: See how the word "thesis" is used here? Think about who is writing this.


Narrator: "Robert Mueller isn't investigating Trump at all. In fact, Mueller is working *for* Trump, and his real target is a corrupt cabal of Deep State globalists (here Hillary, Obama and McCain are shown) who he will round up and ship to Guantanamo."

Comment #2: It is here that the writers of the sketch have overplayed their hand. They overestimate the extent to which the audience is with them. In fact, they only serve to reaffirm what many ordinary people believe. And they forget that comedy is art: Politics ruins it.

This reminds me of the story of the ancient prophet-for-hire Balaam, who was paid to curse the Jews and instead God turned his mouth so that he winds up blessing us. Hahahahahahahaha.

Narrator: "That series of arrests is referred to as 'The Storm.' And it's coming."

Translation: WE WILL NEVER GET ARRESTED YOU FOOLS.


Narrator: "But let's back up. 'The Storm' started one sunny day last October when Trump said this (cuts to @POTUS): 'You guys know what this represents? The calm before the storm.' (reporter asks) 'What storm, Mr. President?' (POTUS replies) 'You'll find out."

Translation: You're crazy. And you're stupid too. Do you not watch the news? Of course not.

Comment: The assumption here is that the President is unaware of, or disconnected from, #QAnon. What is the basis of this assumption?


Narrator: "...who began posting about the storm on anonymous Internet message boards like 4chan and 8chan, the only place to get unfiltered truth and uncensored tentacle horns."

Translation: We control the mainstream media, not these anonymous message boards, so don't read them.


Narrator: "Q claims to be a high level government agent with top secret security clearance. Which makes sense because he has so much time to post on the Internet."

Comment #2: If you've ever struggled to read Q code and felt stupid, this next part is truly funny.


Narrator: "Three weeks after Trump's cryptic 'storm' reference, Q made his first post, predicting that Hillary Clinton would be arrested on October 30, 2017, which definitely happened."


Narrator: "...because followers noticed her orthopedic boot must be covering an ankle monitoring bracelet, and is the only reasonable interpretation of this picture."

Comment: Lots of ankle boots around. Newsweek even covered it. Surprised they missed this one.

Narrator: "Since that first post in late October, Q has been dropping cryptic clues, called 'crumbs,' almost daily. His legion of followers then collect these 'crumbs.'"

Comment: How do the writers of this sketch know that Q is a man?  Implicit sexism much?


Narrator: "They call themselves 'bakers.' Which makes total sense, because that's what bakers do. They bake cakes from the crumbs of other, staler cakes."

Comment: This sounds like the writing of someone who really studies Q online, but doesn't get it. For example, where's "memefag?"


Narrator: "Most crumbs are questions that invite readers to draw their own conclusions. Take for example this real post, from last month, that I will now read verbatim. 'Think image drop. Think O P. Think United. When does a bird sing? Everything has meaning.' Could be a capital I, or a lower case l, Q. So elegant. So clear."


Narrator: "You see Q is like Socrates, or someone who doesn't have enough information to make statements."

Translation: obvious.
Comment: See how the humor shifts to anger? Who is speaking here?


Narrator: "Luckily bakers are here to connect the dots. Some theorize that the image drop is Obama's portrait, OP. And United Airlines now flies nonstop to Cuba. It's a commercial airline which evades Deep State leakers."

Comment: We were focused on the weird mockery of a portrait.

Narrator: "Birds sing when they're caged, so Q is telling us that Obama is on United to Gitmo, where he'll confess. It's pretty obvious, if you ask me."

Comment: I don't recall this interpretation of things AT ALL. Do any of you? Was the writer filling in blanks with imagination?

Comment #2: Note that we don't get information, then we're criticized for not having it.


Narrator: "Sure, critics call 'The Storm' a coping mechanism for those who can't accept a world where Trump isn't winning. But I can't accept that."


Narrator: "Instead, I prefer the simple, soothing idea at the heart of 'The Storm.'"

Comment: Whoever wrote this underestimates the extent to which #QAnon followers seek to invalidate incorrect statements.


Narrator: "That everything that looks bad for Trump is actually good for Trump."

Comment: This is actually the furthest thing from the objective nature of commentary by President Trump's supporters, who know that he can only be helped through objective feedback.


Narrator: "And while that's the center of the storm, there are even grander ideas living at the fringe. That's right. We haven't even gotten to the fringe yet."

Translation: If you believe this s--t, you're definitely the fringe. The fringe is dangerous.


Narrator: "You see the storm is a sort of master conspiracy that connects every conspiracy you already know is true."

Translation: All conspiracy theories are false. (Conspiracy, in this context, means organized crime by public officials.)


Narrator: "The dossier, fake. The Vegas shooting, an inside job. The Deep State, connected to Big Pharma, the Illuminati and, say it with me, the Egyptian Sun God Ra."

Comment: It's interesting how they picked Big Pharma to focus on. Of all things. (And not, for example, Child Protective Services.)


Second figure: "May I interrupt for a moment?"

Narrator: "Author and journalist Kurt Anderson, what are you doing here? You're not an expert on this!"

Kurt Anderson: "Well, I kind of am an expert on this, I just published a bk called 'Fantasyland.'"


"about how these kind of nutty conspiracy theories, and all kinds of magical thinking, really are pretty fundamental to the American character."

Translation:If you're stupid and voted for Donald Trump, it's not your fault, because Americans are naturally stupid. Hillary was just too smart to win.


Narrator: "So you're saying there's nothing more American than a conspiracy theory. We're saying the same thing."

Anderson: "No, we're not. People can look at the same thing and say hey, that's goofy, that's silly, that's funny. But there are a lot of people, in the millions, who take this kind of thing very seriously. That's where it can get dangerous."

Comment: The issue is not whether people take conspiracy theories seriously, but rather whether there is a concerted effort to violate the law by certain corrupt people in power, and an accompanying concerted effort to hide or eliminate the evidence of this, along with an attempt to deny this information to the American people so that justice can be done.

Narrator: "Now it's reached members of Congress and the President, who is really a conspiracy theorist in chief. Birtherism, a conspiracy. Millions of people illegally voting, a conspiracy."

Comment: This line is an attempt to normalize the idea that President Trump is mentally unfit to hold office. Also, no counter-facts are offered.


Narrator: "'The Storm' is just a short hop, skip and jump away from those kinds of thinking."

Translation: People who question the State are a danger to the State and must be rendered harmless.

Comment: The people who control the mainstream media, meaning journalism, journo-entertainment, and Hollywood, have a very powerful voice. (By all means, listen and read whatever you want.)

But the American people are wise. It is up to us to make our voices heard as well.

Copyright 2017 by Dr. Dannielle (Dossy) Blumenthal. All opinions are Dr. Blumenthal's own, as always, and do not represent any other organization, entity, institution or individual. This post is hereby released into the public domain. Screenshot from video of the comedy sketch.