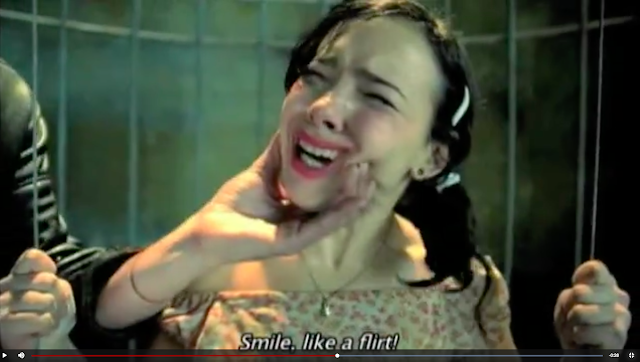 The video is also known as “Birdcage.”

Why does DHS use the image of a cage in its videos?

On December 2, 2017, Sarah Ashcraft — who alleges that she is a victim of long-term, family-based Luciferian occult abuse and human trafficking , and who has also stated that she directly encountered Hillary Clinton at age eight as part of this abuse— stated on Twitter:
“I was 10 — sent to Portland to visit family friends. They took me to Oceanside. I was carried into a forest in a cage & made to witness vicious rape/murder of a young boy during a “purge party”…One of my worst memories so far.” Also in 2017, on August 8, the Dr. Phil show aired a segment with “Kendall,” an alleged survivor of human trafficking, who also says she was locked in a cage, very literally, with other children who had been kidnapped. She also said that she was part of a large and organized ring, where clients would sometimes pay money just to participate in “hunting games” where they would hunt children — another claim that has been echoed.

You can read a summary of Kendall’s description of her experiences at the website of now-independent journalist Liz Crokin, who has reported being a victim of an intimidation campaign because of her willingness to report on these topics.

I am proud to say that I worked as a CBP Public Affairs specialist and helped develop the below campaign flier to promote awareness to potential victims. Our work joined that of the FBI, Immigration and Customs Enforcement/Homeland Security Investigations, the Department of Health and Human Services, Administration for Children and Families, Office on Trafficking in Persons, the Department of State and surely many others. On July 23, 2010, the Voice of America (VOA), which is funded by the U.S. government, posted a video report detailing the launch of the Department of Homeland Security’s anti-trafficking Blue Campaign. It’s still in existence today, eight years later, demonstrating its bipartisan importance.

On the video, DHS CBP Commissioner Alan Bersin showed obvious contempt as he warned that the government was coming after these criminals. “It’s repulsive,” he said, and turned to the traffickers directly, stating: “We will find you, we will arrest you, we will prosecute you, and we will free your victims.” The video shows a young girl, standing on the street, in front of a pizza place.

We see pizza shown very prominently: once in the window of the storefront, and once, more subtly, behind the girl’s head.

As reported widely in the media (for example The Associated Press, published in The New York Post, October 23, 2017), a corrections officer from New Jersey was arrested after placing an ad on Craigslist seeking females “into Cheese Pizza,” a reference to child pornography.

Where does the U.S. government’s Department of Homeland Security get its outreach ideas?

Published on February 7, 2017 by Dannielle Blumenthal, Ph.D. All opinions are the author’s own. This post is hereby released into the public domain.
- February 08, 2018