The Sad Subtext of "Menashe" 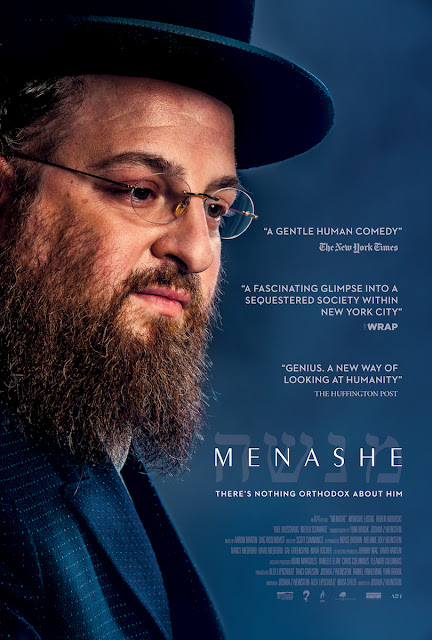 This isn't a movie review, because you can read that elsewhere. These are just a couple of thoughts on an outstanding film that I feel personally connected to, having grown up around some elements of the plot and the characters.

Briefly, Menashe tells the story of a Hasid from Williamsburg who is estranged from his son by the community, following on the death of his wife. That decision was made by a rabbi (the "Ruv") to whom everyone goes for advice, encouragement, support and leadership, and to settle conflicts as they occur.

The luminosity of this movie is that you are plunged right into the world of this community. The downside is that you aren't getting a total and complete picture, because some of the negative elements are downsized, minimized, or eliminated altogether.

Not that it is the responsibility of the moviemaker to produce a documentary. Not that he has to make you love or hate them.

I feel love for this community. I love the ideal of putting God first. I love the honesty, and the fealty to family. I love the Torah study and the primacy of one system that governs all of life.

But the system has its flaws, and Williamsburg, like any other ultra-Orthodox community, has problems that need to be dealt with. I'm not saying how, because I don't live there. But every person has certain inalienable rights: religious free will; parental rights, as long as there isn't abuse; a secular education; freedom from sexual abuse; and the right to inhabit one's own personal approach to gender and sexuality.

I loved this movie; in my way, I loved its idealized world. But the real me can't ignore the issues.

For one thing, no human being, even a spiritual leader, is all good or all knowing.

For another, while the movie showed the reality of poverty and its humiliating nature, it did not show much about how the hyper-controlled educational system psychologically scars many young people, other than their getting kicked out of school unfairly (for example, due to irreligious parental behavior) or being raised "too strict," or with too much homework.

There is no discussion of those who live virtually or completely on the streets because the community doesn't know what to do with them. It ignores pedophilia of young boys altogether, and the rape of little girls; we don't see what happens to those considered disgraced by abuse.

The phenomena of forced marriage is discussed, but overall women's rights issues are minimized as the right to go to school and a brainwashed woman arguing against her own right to drive.

We also don't see the suicides.

Menashe tells a compelling story very well. But it is irresponsible to consider this text absent its social context.

In the end, its best use may well be as a teaching tool.

Copyright 2017 by Dr. Dannielle Blumenthal. All opinions are Dr. Blumenthal's own. All rights reserved.
- October 15, 2017