Some Reflections On Jewish Love & Marriage 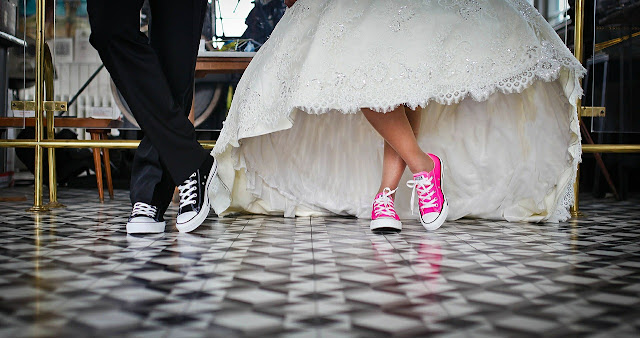 I graduated Bruriah High School, a religious yeshiva for girls, in 1987. Some of the graduating seniors got married right away. To me it was sort of a marvel, how quickly they sealed up their lives.

A lot of girls went to seminary for a year. That wasn't my plan; I wanted to get to college and out of the petri dish that was my insular little world. They used to joke that I took "Ferris Bueller's Day Off" because I loved New York City so much, and in particular Greenwich Village. And would go there as much as I could.

In my mind I was a feminist. Ask anyone who went to high school with me and they will tell you that I talked about Gloria Steinem all the time. For me, that was feminism.

As a feminist I did not want to get married. I believed, when I was young, that marriage -- or traditional marriage anyway -- singularly destroys women. That was the message I got, overtly and covertly, from any sort of feminist media.

But it is your unconscious mind that guides you. And what I saw from reality, not from TV and the movies, was that a man and a woman belong together. My Zayde and my Bubbie. My Grandma and my Grandpa. My husband's parents -- may all of them rest in peace. Today, living, thankfully, my uncles and aunts. My mom and dad. And yes, me and Andy, thank God.

I grew up in a time when gender was changing rapidly. But marriage was still expected. I started out at Touro College and people paired off right away. My first roommate (whose ice cream I infamously picked apart without asking, which meant that she was only my roommate for a day or so!) married her boyfriend. I met up with her decades later, apologized for the ice cream, and her kids went to the same yeshiva as my kids. Now they live just a few miles away and when I see her I tell her, truthfully, that she hasn't aged a day since high school.

One girl I went to school with at Touro, whose name I can't remember anymore, was so in love with her boyfriend and she married him during my freshman year in school. He died tragically. I still remember her eyes. She had these rings around them. It's hard to visualize because when I do that it brings back all the pain she bled.

My father did not let me to go the co-ed Frisch High School in Teaneck, which was my first choice. I wanted to study Talmud. I wanted to go to a "normal" school. Looking back I am glad that I went to Bruriah. Mainly because I went to a school, however suffocating, where the entire focus was the care and grooming of future young women as women. They taught me to type for two solid years, because "you might need to get a job." They taught me to wear my skirts long, and to keep my elbows and collarbone covered. They taught me -- Mrs. Newman (a"h) taught me, in her infamous senior-year sex education class, where everyone got to drop a question in the hat -- that there was nothing more fun than the private life of a married couple.

"You can even swing from the chandeliers," she said.

Which led me to visualize actually swinging from a glass chandelier, like in that movie The War of The Roses. So no special insight there. But her tone, one of excitement and wonder and happiness and awe, made its mark on me.

Marriage is the natural state of being.

There is so much more to write on this subject, especially from a Jewish point of view. I haven't even scratched the surface.

But it seems to me that the number one problem young Jewish people face nowadays is the influence of secular society. It's not that people learn "marriage is bad." That's not the message whatsoever.

Again, I am not arguing that people should just take the first person they can. Not at all, frankly that is a terrible idea. When it hits, it hits, and that's the end of it. I don't think that very young girls in particular, girls just 18 years old for example, should commit their lives to anyone. They're just too young.

But at the end of the day, the shopping culture of the West has given people a surplus of choice. The marketplace tells us we can custom-blend our makeup, custom-fit our jeans and custom-"craft" our salads. Surely our partner will be custom-made the same way?

They distort the notion of a shidduch, of a zivug. This is a luxury that our grandparents did not have, in their stark raving poverty and isolation. You had who you had in the community, and honestly, that was it.

It was a good way to handle me.

Marriage should be undertaken with the utmost of care. Preparing for it is imperative.

Yet things have gone to an extreme.

Marriage, to a nice and decent person who treats you well, is the human state of being.

All adults, whatever their religious beliefs and whatever their personal sexual orientation, are born for love. For a life of love and companionship with another person.

Let us stop asking young people to pass a million litmus tests. To prove their perfection in any way, to God, or themselves, or others.