On The Belief That Some Women Deserve It 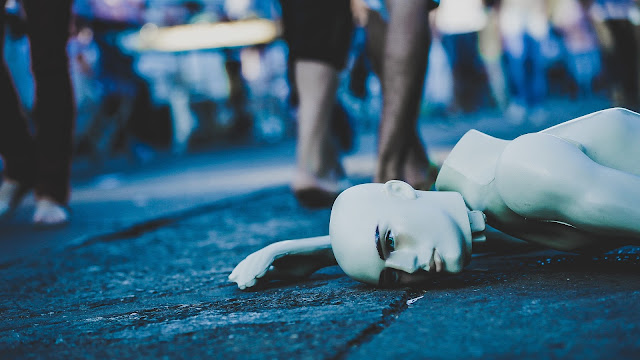 I don't have to look very far to find victims, or the people who think they deserved it.

Many of them seem to think so, too.

There's the girl I knew who was taken from the playground and "something happened" to her. She disappeared from school, never to be heard from again.

There's the one who was sitting at home when the doorbell rang. The guy said he was "from the power company."

She opened the door and he lunged.

Should have checked his ID under the door.

Should have called the power company.

Shouldn't have answered the door at all.

Another one had a dinner party and one guest stayed after the other people had left.

But he overcame her.

Shouldn't have had a guy over to her home.

Shouldn't have been there with him alone.

Having a male in your home, when you're female, is an invitation to have sex.

Yet another person joined the military.

The only girl in the unit.

Attacked when she went to the bathroom.

What was she doing with all those guys?

Everybody knows that women in the military aren't safe.

The stories go on and on. As do the justifications.

Harvey Weinstein? Everybody knows that actresses sleep their way to the top.

Let's face it, Hollywood is sleazy.

They knew what they were getting into.

They didn't call the police.

How about women who want to become successful business executives?

You know what goes on at these conferences.

I had a friend once who told me that she was sick on a job interview.

The interviewer said, "I'll give you a ride home."

"No, I don't think so," she replied, a bit suspicious.

"Don't worry about it," he said, in a tone that conveyed understanding. "I'm talking about a carpool."

And at that he nodded toward his colleague, who had helpfully appeared in the hall.

In the car he said, "Let's stop off for a minute and get something to drink."

"I thought you were giving me a ride home," she said, now a bit afraid again.

"It's nothing," he said, nodding at the other fellow in the backseat. "We'll get you a cup of tea."

In the hotel -- "it's right in the middle of the city" -- he sat next to her in the booth, where he promptly grabbed her breast.

My friend was unemployed, sick, and had no money to get home.

It seemed that the "carpool" had disappeared, too.

She nursed her tea and prayed for "happy hour" to be over.

Thoughts raced through her head, like this can't be happening and I don't know what to do and maybe it's all in my mind.

She went with him to the car and he took her to where she lived. The ride went uneventfully.

"No, that's quite alright."

"Please, let me be a gentleman," he said.

Against her better judgment, she let him walk her to the door.

The mistake she made, in her tiredness and wish for all of this to be over, was to unlock the key and step in.

Because then the man pushed her in. And what happened next wasn't good.

"Look, I'm just not interested," she said. But by then it was too late.

He physically attacked her.

Change course, she said to herself. Let's pretend this is a date.

The idea was to "convince" him that he, with his immense charm, had somehow "magically" won her over.

He was lulled for a moment and she went into the kitchen and fumbled around.

Frantically she picked up the phone, and brought it into the living room, where her attacker had made himself at home.

"This," she pointed to the phone, "is my boyfriend asking where I am."

The attacker, a clean-cut man with his government ID still hanging around his neck, looked at her intently. He seemed unsure if this was true.

"He is about three blocks away, and he is expecting dinner," she said, in a very serious tone. "If he shows up and you are here, then I am not responsible."

My friend is an unbelievably good actress and the attacker was convinced.

Somehow, by the grace of God, he left her home.

A few years later, she went to a conference about sexual harassment.

My friend hit it off with another woman in attendance.

They got to talking, and my friend shared her story about that horrible night.

With that, she named the attacker.

"Because he did the exact same thing to me!"

"Yes, I had to jump out of a moving car to escape him."

Chills ran down my body as I registered the import of this story.

I recalled what I knew about sexual assault: It's usually not the boogeyman, but rather someone you know. A friend, a family member, a trusted member of the community, a person in authority. Even an acquaintance.

My friend told me another story, about how she used to work in human resources, way back in the day.

There were always men in charge, men who held "parties" where women "voluntarily" attended to sleep their way to the top.

Men who protected her against other men who insisted she attend a "business conference" to "take notes," then confessed they "dreamed of seeing your hair on the pillow next to me."

Her protector at that time said, "If he ever tries that with you again, you tell me."

So who are the women who deserve it, exactly?

Are they the ones who get drunk and pass out?

Are they the ones who run away from home, sometimes to escape the fathers and brothers who rape them?

Are they the ones who have career ambitions?

Are they the ones who want to work in Hollywood?

Did they make a wrong turn into an alley?

Should they have learned mixed martial arts?

Should they pack a gun, legally?

What are the women of the world to do?

Should they pay a man to protect them?

Should we always walk in a pack?

Stay out of the park?

Confine ourselves to busy streets, in daylight--no parking garages or parking lots or stairwells?

It is easy to believe that "some women deserve it."

The belief makes you feel safer, I think.

If it's their fault, then you have at least a tiny measure of comfort.

But the truth is, if someone gets a thrill from being a sexual predator, then they will find a way to attack.

What the victims do to prevent them can only go so far.