Answering The Call For "Real Men" 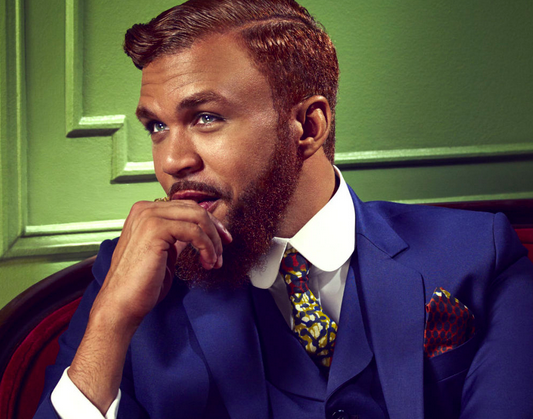 "There are a lot of amazing men that I don't think are celebrated enough, especially just neighborhood men. Men who aren't even remotely famous....I wanted to do something for the real men out there." - Jidenna Mobisson, singer-songwriter, "Classic Man"

Esquire has an interview with Jidenna Mobisson, whose catchy tune is quickly becoming that song, the one that embeds itself in your scalp like a tick and no matter what other thing you're doing...it sits there on the jukebox, playing.
But you cannot ignore the clothes.
Or the shoes.
Look at these shoes.

Esquire has an interview with the artist where he talks about the designers who contribute to his clothing line; according to him it is mostly "in-house," co-designed by himself and Whippa Wiley.
A company with a similar sensibility is Ikiré Jones, "proudly hand-made in Philadelphia, USA."

Look at these clothes!

As we know, fashion is not an insignificant thing but rather a statement about who we are and who we want to be.
Fashion is the core of this video. One thing it successfully does is make us think about stereotyping of Black people and people of color generally. Consider this stereotypical image, a frame from the video, which we regularly see on television, film and the evening news: police officers arresting a young, upset-looking, non-White male, face forward against a metal grate.

The video rewrites the typical narrative by showing a well-dressed Jidenna politely interceding on the young man's behalf. He and his friends lead several youths away, firmly but gently.

They are not just "going anywhere" but to a place of learning and growth. Here is another "classic man" mentoring the youths as they master the strategic game of chess.

The young people - male and female - study martial arts, too. And science and technology, as well.

As the video shows, the well-dressed man, the "real man," plays a vital role in the community. He exemplifies excellence, precision, politeness, joy, and community. He is a protector against a sometimes hostile world. And he is a teacher, mentor and guide of young men in particular.

The "real man," as we all know, can be gay or straight - of course! It is 2015.
The real man can even be a woman. (Just ask the brave Caitlyn Jenner.)
It's a new brand world and you can be whoever you want. You should be.
But this video undoubtedly celebrates heterosexuality.
These are images of men "strutting their stuff" for women.
What it says: We ought to enjoy ourselves, enjoying that.

The message of the video is that masculinity can and should be celebrated as a positive identity. In short, "it's OK to be a man."
I was watching an old episode of Friends yesterday on a plane. In this one, the character Phoebe learns that the man she was in love with and who she willingly married so he could get a green card - is not really gay.
In a long and very funny monologue that reverses the painful common narrative of a gay person talking about social pressure, shaming and finally coming out, Phoebe's husband talks about how hard it is to fit in as a straight ice dancer.
That episode aired in 1995. Twenty years later, it still feels relevant.  And when I do even a cursory survey of what passes for mainstream men's fashion, it does not seem to celebrate traditional notions of masculinity as Mobisson's video does.
Here is a typical example from Calvin Klein, but even a cursory Google Search yields many others.

The idea that "real men don't do fashion" is so common that there used to be a popular show on TV called Queer Eye for The Straight Guy.
Remember Carson? (He's the blonde man in the photo.)

In contrast, Black fashion - for work or not - is always and unapologetically masculine. Here is just one example from Sean John.

I am a fairly radical feminist, but to me that means I speak things as I see them, regardless of whether they sound politically correct.
So I have to say this: I see the modern men's movement as vital, meaningful and real. It is much more than products aimed at a male target market, e.g. Men's Health magazine. It is mislabeled as a reactionary movement, e.g. one aimed at reversing the gains that women have made.
No.
Modern masculinism is a shift toward re-valuing men as men, celebrating masculinity specifically in a world that increasingly says gender should be eliminated.
It is a movement in which masculinity is best understood as a set of capacities, skills and cultural values that are important and ought to be preserved.
The influence of the men's movement can be felt in the movie Labor Day (2013), which shows Josh Brolin restoring life to the abused Kate Winslet. It is Ray Donovan on Showtime. It is the Art of Manliness.
It is the modern fashion for men to wear beards.
What I liked about Jidenna Mobisson's video, and what is new today, is the nascent leadership of Black men in the new men's movement. His music and accompanying video exemplify the trend.
Good!
It is time to end dominance of any kind. And for African-American men and other men of color, who regularly take the hit for many of society's ills, that day is long overdue.
__
All opinions my own. Cover screenshot via Wondaland Records via Esquire. To request assistance with branding, contact me.
- September 10, 2015