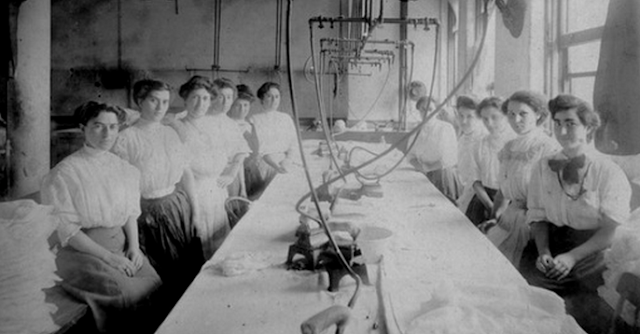 On March 25, 1911, the Triangle Shirtwaist factory burned to the ground. Nearly 150 garment workers, primarily women, were killed, because they were locked into the facility, supposedly to prevent them from stealing.
More than a century later, the horrific incident is engraved in Americans' minds as the reason we need both unions and laws to protect workers from the ravages of greedy industrialists.
The workers at Triangle Shirtwaist were overwhelmingly young Jewish and Italian immigrant women in their late teens and early twenties. But they could equally have been among the 117 killed in the 2012 Tazreen Fashion factory fire in Bangladesh.
The point is, people need to eat. And for most people, if that means working in subhuman, degrading, hazardous conditions where every single day is another chapter of one's personal hell, then they will do it, unless and until they can do better.
But what about the postmodern work factories of 2015? Those hubs of "disruptive innovation" where the hazards are not so visible?
On August 15, 2015, the New York Times published a stunningly well-researched, thorough and informative expose of the iconic American brand, Amazon.com.

In all, Jodi Kantor and David Streitfeld spoke to more than 100 people who are or were employed there.
They told of a company where employees were routinely subjected to a series of unfair, degrading, and excessive demands. But they accepted them voluntarily, because they were the "elite," handpicked by Bezos for their stellar abilities and potential to rise within the ideology he espouses in the name of "leadership."
The results:
This company is apparently a publicly traded one, but in reality appears to be a dictatorship of one. Jeff Bezos founded it in 1994 and more than twenty years later, continues to serve as Chairman, President and CEO.

Of course, all reporting is biased and the New York Times is known for its progressively left-wing bent. However, even if only some of the basic facts are presented accurately, the company has evolved what sociologists would call a "total institution." (It should also be noted that according to the reporters, Amazon.com sharply restricts employees' ability communicate externally about their workplace).
Some of the key features of such an environment are:
All of these features describe Amazon.com, which appears to have done a great job inducing people to give a thousand percent of themselves, willingly, in return for what can only be described as psychological devastation.
The company's practices are abusive mentally, just as the pre-workers'-rights industrialists of the modern age were abusive physically. They are consonant with the features described by sociologist Erving Goffman in his classic essay,"Characteristics of Total Institutions."
The point of a total institutional environment is to manipulate the individual into conformity. As workplaces, they are cults, and they hurt people unfairly and badly, every single day, whether or not they seem to agree to be there.
______
All opinions my own. For assistance with employer branding contact me. Credits: "Women of the Triangle Shirtwaist Factory" screenshot viaTheParanormalguide.com. Amazon logo accessed here. Jeff Bezos photo by Steve Jurvetson via Wikimedia/Flickr.
- September 10, 2015