A Feminist Meets The Sheitel Macher 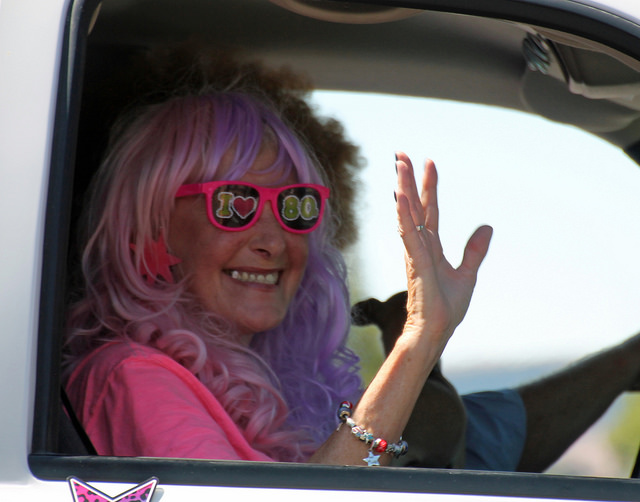 At the Lakewood wedding I attended, my niece's wedding, my mother was supposed to wear a wig.
She'd gone shopping and apparently this had resulted in two choices, neither of them especially flattering.
The sheitel macher was very nice. All of the women were very nice. Somebody told me they seemed almost too nice. She used the phrase "almost like Stepford wives" and I had to laugh.
I don't think they're artificially nice. Maybe sheltered.
So my mother is sitting in what looks like a barber's chair, in a room where the women are supposed to get ready. Inappropriately the men keep bursting in. First there is my father with the camera. He has a sheepish look on his face like this is the naughtiest thing in the world, and I suppose it is somewhat naughty for a man to go into the women's dressing room, even if we are all dressed.
But as my mother says, "This is our family," so what else would you expect?
Then my sister's sons join us and there is general hilarity about the dysfunctionality that is our blended crew.
So my mother is still in the barber's chair and I'm sitting opposite her. Me; my sister's mother-in-law who is very nice and bemusedly tolerant of this whole religious affair; the makeup artist who apparently grew up in Lakewood and is sort of tolerated because she does really good makeup, but is not as religious as the really religious ones; my daughter, who is angling for a makeup session but there's a long line of women waiting for the goods; and my niece who is just about as happy as can be amidst all the femininity and the frills.
My sister is running in and out making sure everything is under control.
And then there is the bride and her shomer, who I keep thinking of in a skeptical way as a "minder" but who seems to be reassuring the bride when her nerves would normally be off the charts. Indeed the bride tells me this is true, and so does the shomer. I make a mental note to learn the skills of this young lady who just quietly but very attentively supports her friend.
As the makeup artist does her thing I turn and look at my mother.
The nice sheitel macher, who looks about 25, has plopped this indescribably bad shaggy mop of a wig onto my mother's head. It is horrible. Like, really bad.
The women in the room are murmuring audibly that the wig looks bad but they don't want to make my mother feel bad.
Somebody says "let's see the other one."
Let's call the "other one" Plan B.
Plan B is not as bad, but it's close.
At first I try to reassure my mother. "It will look better when the makeup is on."
It seems like an interminable wait to get that makeup on.
My mother is so dutiful. She doesn't want to embarrass my sister because this is a religious wedding, right? We are all falling into line.
I've already had a "discussion" with her because my daughter's dress shows a little back skin at the top.
"No, she is not wearing a shell to cover up a little back skin. Please!"
"Listen, Dossy, go back to taking your pictures," she says.
"No Facebook!" says the bride. "I don't want an ayin hara."
I turn to my sister's mother-in-law.
"I don't know how much more of this religion I can take."
She looks at me unsympathetically.
"I had to patch up this dress in three places just to make it in here," she sighs, pointing to her neck, back and arms.
My nephew is taking this all in and shaking his head. He rolls his eyes and goes back to the other room.
I take a good long look at my mother and realize she is not going to do well with this wig. Now how do we get this handled.
The makeup artist is good and she does a very flattering job of adding cosmetics to my mother's face.
The wig is a little bit better then, but it's frumpy. And it's big for my mother's head. She is telling the sheitel macher that she's worried it's going to fall off.
I have this image of a wig somehow skating off my mother's head as she walks my niece down the aisle. And it's laying on the carpet beneath her as she keeps on walking.
And something inside me shrieks "NO!"
"What should I do?" says my mother.
Nobody wants to tell her that the wig looks bad.
My mother heads into the bathroom and calls me. "Dossy, come in here," she says. She needs help zipping up her dress.
Suddenly I can't take it anymore.
"TAKE OFF THAT DAMN WIG," I yell.
The bathroom walls are thin and I don't care.
"TAKE OFF THAT G-DDAMN WIG. I CAN'T STAND IT ANYMORE."
"Do you think?" my mother says.
"OH MY G-D TAKE OFF THAT WIG I CAN'T LOOK AT IT."
My mother takes the wig off. Her hair looks fine.
I can almost hear her sigh of relief.
"Let me brush it," she says.
"YOUR HAIR IS SHORT," I say. "THERE IS NO HAIR TO BRUSH. LET'S GO ALREADY."
Enough of this drama. What is it, five thousand years we're sitting here in this dressing room?
I can't decide if I'm more claustrophobic about being in here or more agoraphobic about going out and greeting all the guests. I decide claustrophobia is better.
I sit down in the corner and my mother stretches out her arms before the small crowd.
"What do you all think? Wig or no wig?" she asks.
And then my sister's mother-in-law speaks up.
"You seem happy. You looked good either way. But this way you definitely seem happier."
____
All opinions my own. Photo by Sarah Stierch via Flickr (Creative Commons)
- September 01, 2015