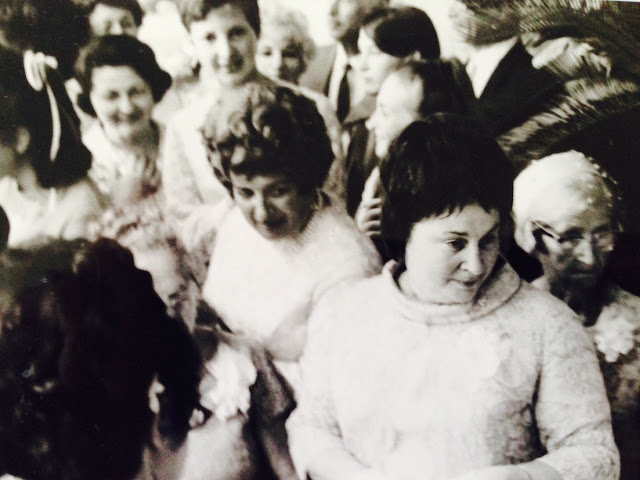 I come from a strictly Orthodox family that values three things above all: the worship of G-d, the learning of Torah, and strong family bonds.

There are some cultural differences.

My mother's side of the family is "Litvish." Literally this means "from Lithuania." The yeshivot in Lithuania were renowned for the quality of the Torah scholars they produced. So in practice this cultural tradition places an emphasis on learning halacha in a yeshiva setting. The meaning of life comes from accurate observance of the laws.

My great grandfather, Reb Dovid Garfinkel, a"h, was a Torah scholar in the Litvish tradition. I am not sure if he meant this humorously or not, but I am told he used to say that a person should not be grandiose in their aims: "Just don't make the world worse."

Reb Dovid emphasized the importance of taking care with one's words. You may have heard the saying "speech is silver and silence is gold." He emphasized the Jewish prohibition against gossip and its discouragement of idle talk generally.

My mother's side of the family reflects the influence of Litvish culture generally and Reb Dovid specifically, as follows:


That's my maternal grandmother, Muriel Garfinkel, a"h, in the forefront of the photo above. She was married to Reb Dovid's son, my grandfather Murray a"h. The two of them were so much alike the uncles and aunts used to call them "Mur and Mur." Routinely they would pick up the telephone at the same time when I called.

Grandma was a true feminist. It seems to me that her values went beyond the traditional Jewish ones of home and family. She had a kind of holistic, humanistic view of the world we don't see articulated very clearly now. But she was Rosie the Riveter:


Much of my childhood, or at least the part of it that I spent in Grandma and Grandpa's house, was spent actually litigating the difference between Chassidim and non-Chassidim, or Litvish tradition, which they never called out in my earshot. Probably because for them it was the default view of the world.

Why did Grandma and Grandpa get so exercised about Chassidim?

Because it was personal for them: My mother married my father.

That's Bubbie, Matilda (Mattie) Stroli a"h, in the center of the photo above. She came from Cluj, Hungary-Romania. Like my Zayde, Rabbi Valentine Stroli, she was imprisoned in the camps (my grandmother was in Auschwitz). Bad things happened to her family. She was one that got away.

She married Zayde after the war and they had my father, Alex. He and my mother married, in the late '60s and my childhood was full of discussions that led me to learn the following.

As for Chassidism itself:
My father proposed to my mother on the first date. The story goes that he picked her up and took her out to eat and asked her what she wanted.

My mother is simple and lovely and loving. That's her in the photo below, on the left.

That's me in the middle. My husband caught me young; we've been married for nearly 25 years. My older daughter Minna is on the right. (Rebecca is not pictured here.) 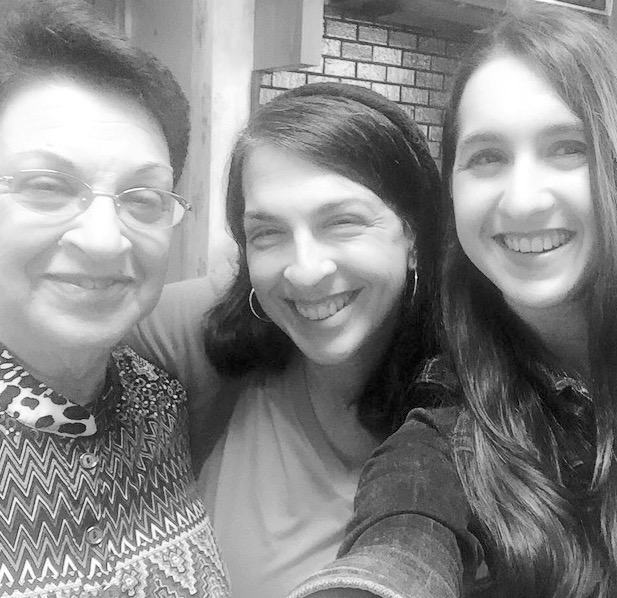 Minna and I came to New Jersey yesterday for the wedding of my sister's oldest daughter. I took lots of pictures but am not allowed to show them to you because the family is worried about ayin hara (evil eye).

What I can tell you about the wedding is that it was beautiful and fun and holy.

The wedding hall was in Lakewood, New Jersey, a center of yeshivish Jewish life.

Litvaks and Chassidim were in attendance, and they were just fine sitting side by side.

We spent a good long time in the makeup room getting ready.

The bride had a friend there to keep her calm.

We bonded over makeup. I felt bad for the makeup artist because the women just kept coming and coming.

There were beautiful, sweet children and babies overflowing the hall, k'neina hora.

Unlike what we see in secular culture, the focus was overwhelmingly on the family.

Everywhere you looked there were mothers, fathers, grandparents, uncles and aunts and extended family holding, hugging, feeding, and talking to their children.

People talked about their jobs and some people seemed to have high level job titles. But it was clear that there was no such thing as a "career ideology" the way there is in the secular world.

Religious people do not derive their identity from the workplace.

* * *
All in all, it was a wistful throwback for me personally. I had re-entered "my world," except as an adult that left it many years ago.

You can't go back in time. And I don't think I could live in this world anymore, at all. I am a secular person and a feminist. I don't live a life dictated by all the rituals they do.

But I can remember all the good that lived there when I was young. Which I took very much for granted.

I can share with you a limited amount, in words. That you don't get to see very much of, at all.

Because they're trying to protect what little they have left.

* * *
It's easy to throw stones at religious people.

But when you talk without knowing, or from cynicism and hate, you're not really telling the story.

Mazel tov to my niece and her new husband. Two really nice people. May they be healthy and happy and have a beautiful life.

Mazel tov to my sister and her husband, to my nieces and nephews.

Mazel tov to my mom and dad and to my brother-in-law's parents.

Mazel tov to the whole family.

The focus of today's D'var Torah (Parshas Ki Teitzei) was the laws of the so-called "beautiful captive." This term refers to a non-Jewish woman seen and desired by a Jewish male soldier at war. The law gives him the right to kidnap her, bring her home and rape her, after a waiting period of a month.

The right to rape a woman seen and desired in wartime, albeit with certain conditions, is conferred on all soldiers, although it is true that the ancient Rabbis frowned on it. They predicted that those who took advantage of this accommodation to human fallibility would suffer in the end.

But as the Rabbi explained, they ancient sages understood that war created savages out of decent human beings.

Still, it's a very concerning section.

How do we understand the seeming sexism in Judaism that is displayed in this law and elsewhere? Including:


On top of this we have the prohibition against homosexuality. This is called an "abomination," despite the fact that we know many men have an insurmountable sexual orientation towards other men.

Why does the Torah seem to care only about a man's urges, and not about the shattering impact of rape - not to mention kidnapping from one's home, family and nation - on women?

To bring in a contemporary horror, how can we criticize ISIS for sexual brutality, slavery and trafficking, when the Torah seems to sanction the same thing - albeit on a much smaller and more "humane" scale?

We have to ask these questions and come up with real answers. If the Torah is to really be our living Scripture, it's not okay to wish and rationalize such troubling issues away.

One thing is clear: When women are not represented in the yeshiva, men don't do a very good job representing our interests.

We need more female scholars in the academy.

A Special Visitor To A Special Synagogue

Today we had a visitor to our synagogue, Magen David Sephardic Congregation, North Bethesda, Maryland.

It seems like our shul draws interesting people and this week was no exception. I was drawn to this woman and we talked.

She said, "I wanted to pray in a Shabbat service" - even though she is not Jewish!

All people are welcome at our shul.

I could tell that she was a spirit-teacher.