To My Sister Faigy Mayer, Who Wanted To Write A Book 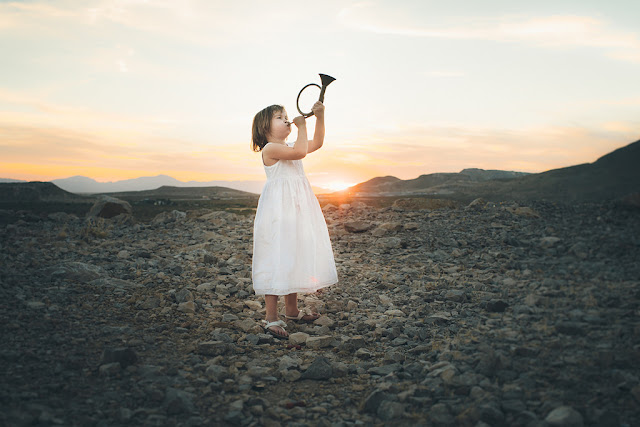 Faigy,
Last week I had a dream. Is it okay if I share it with you?
In the dream my mother called me on the telephone. "Your sister killed herself," she said, and I said, "What? What? That can't be." I was in shell shock.
In the dream, I felt like screaming, "I can't believe she's gone, and what a wasted life."
Because in the real world my sister does "everything," but somehow "everything" is never enough, at least not in her mind.
It was 2:30 on Shabbos morning. I wanted to call my mother and make sure she was alive. I knew that was probably silly. But something seemed very terribly wrong.
So I stood up and went to the living room, just stood there, feeling a terrible sense of foreboding. It felt like blackness.
Less than ten days later, you did a running sprint off a rooftop bar in Manhattan. I found out about it yesterday morning, on Facebook.
You did a 20-foot dive.
And the people kept on drinking.
I did not know you, Faigy, not at all. But that didn't stop me from feeling like I had lost my very own sister.
When I look at your picture on Twitter, here is what I think: She could have been. 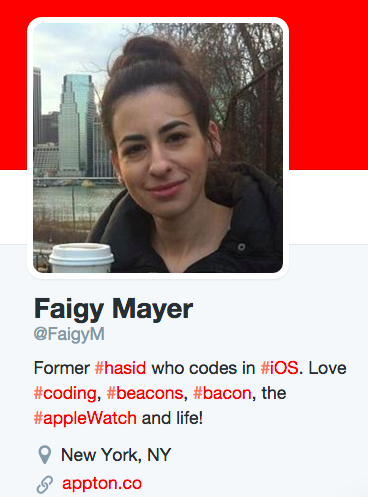 You were a beautiful young woman, sister Faigy. Look at yourself - you were full of life.
That you were made to depart this world is a tragedy. Maybe there are other things to think about today, the social media story of the moment.
But the loss of you is real. The world misses you. People who knew you and people who didn't know you, alike. 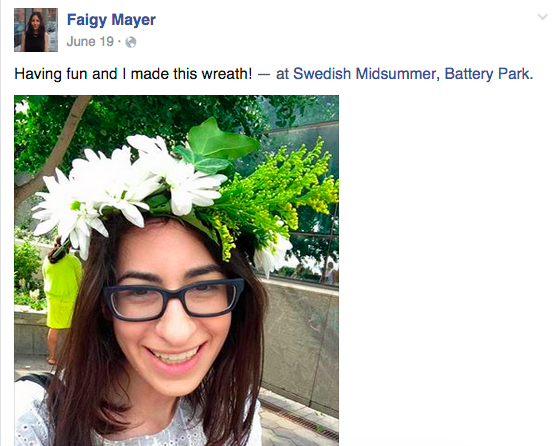 Yes Faigy, I am going to call you my sister. I am formally adopting you after your death.   Your soul, wherever it is, has a place in my backpack. There sits a laptop, there a set of keys and there a couple of credit cards.
For you, there is plenty of room.
"An ex-Hasidic app developer" makes headlines, sure. 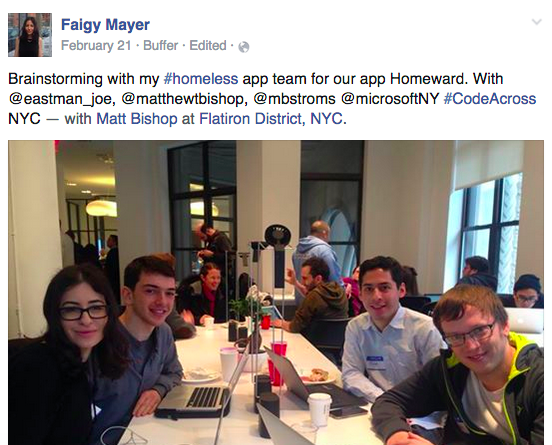 You meant a lot, to a lot of people. On social media your presence had a lot to do with that young-techie thing, that cool crowd that's into coding for good. 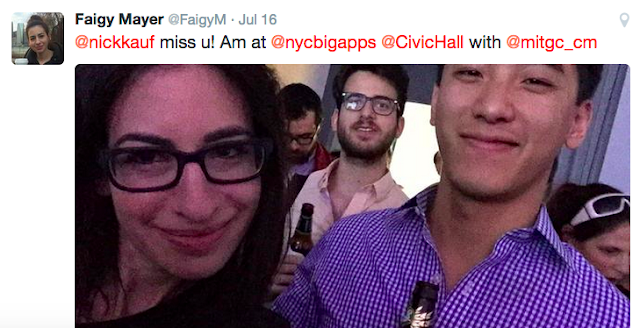 But you were fine without the app.
You were alive, and your aliveness was every wonderful thing.
As a human being and as a Jew. As both. For there is no such thing as an ex-Jew, Faigy. You are always a Jew, and alive or passed, your soul is one with our people.
And despite what they are saying in the paper, I don't believe you chose your death for a second. You were suffering in ways none of us could understand, and it isn't our place to speculate on things that are rightfully private.
One thing is for sure. No matter what problems you had, we all have problems. And you were far from insane.
It would be easy to blame your mother and father for not supporting you. But we know the culture, you and I, right?
You taunted them for the mitzvah tantz. The mitzvah tantz! That's core. 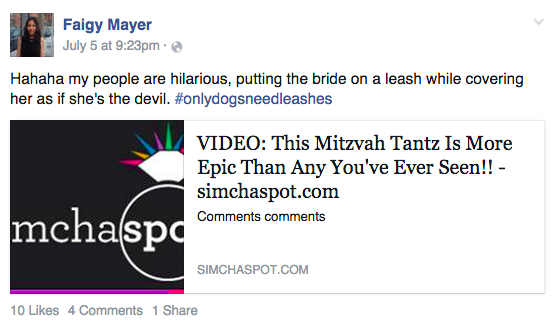 And you walked into treif publicly. Sausage, Faigy. Come on. 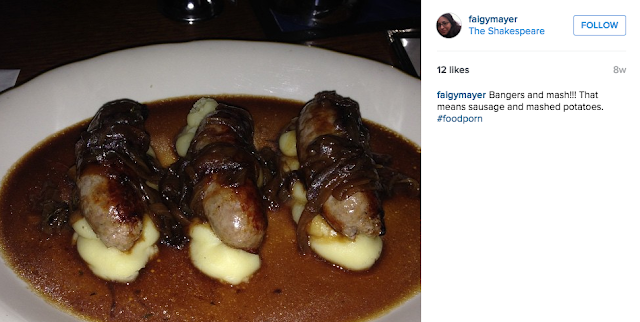 You knew that they could not shelter you. That you had crossed the Williamsburg nuclear red line.

It doesn't matter to me, though, Faigy. It really doesn't; I don't give a damn what the so-called "neighbors" think.
When I look at you closely, do you know what I see? And this is why I cry, and cry.
"Girl, Interrupted."
A bright young candle, but the flame is pinched until it stutters out.
You were thirty years old, Faigy. Just starting your life.
But you were torn down and tormented by a misguided approach to religion.
Somebody told you, for reasons I do not understand, that leaving an ultra-Orthodox cult meant leaving Judaism altogether.
Did you really want that? Looking at what you left behind, I don't think that you did.
Somebody, in the name of "liberating" you, sold you a defective ideology instead.

Faigy, your loss is our tragedy. Had you been loved and supported into life you would have saved so many others.
You told us it was the library that saved you. Judy Blume books.
It's sort of sad and funny...this entry on your Facebook could have been written by me. 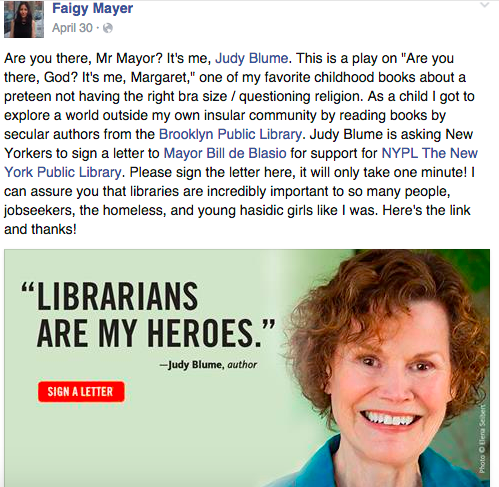 My sister Faigy, you deserved to write that book you wanted to write.
I understand the pain you felt at having others narrate your story for you.
And although they may think they were protecting the world from your apikorsus, or in their minds "mental illness," your parents were wrong to keep your photos from you.
Writing one's memoir is part of free choice. I find it unspeakably cruel that someone would withhold from you any evidence of your childhood memories. 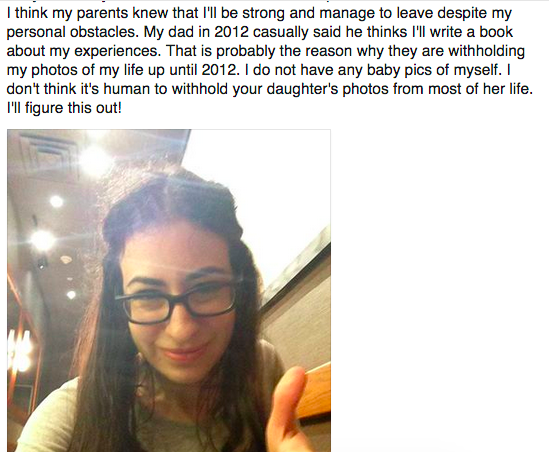 But that is the crux of the problem, isn't it, Faigy?
In the Chasidic world, your life is not your own.
You dared to be a girl who insisted on her freedom. An unspeakably offensive act.
And for your insistence on being your own person, you ultimately lost your own life.
My sister Faigy, I am praying that people remember you. That your struggle gets engraved on their brains for good.
I will always carry your memory with me.
May you find true peace in the Next World, may HaShem grant you solace from all your suffering.
And may your family, and the community, be consoled and come to terms.
Whether you know it or not, or believe it or not, they will always miss you and love you.
Love, your sister in struggle,
Dossy
_____
Cover photo by Amanda Tipton via Flickr (Creative Commons). Profile photo via Faigy Mayer's Twitter account. Sausage photo via Instagram. Other photos via Facebook. All opinions are my own and not those of my agency or the federal government as a whole.
- July 22, 2015