Humans of New York Captures Needless Suffering Of A Child, In The Process Unites Humanity 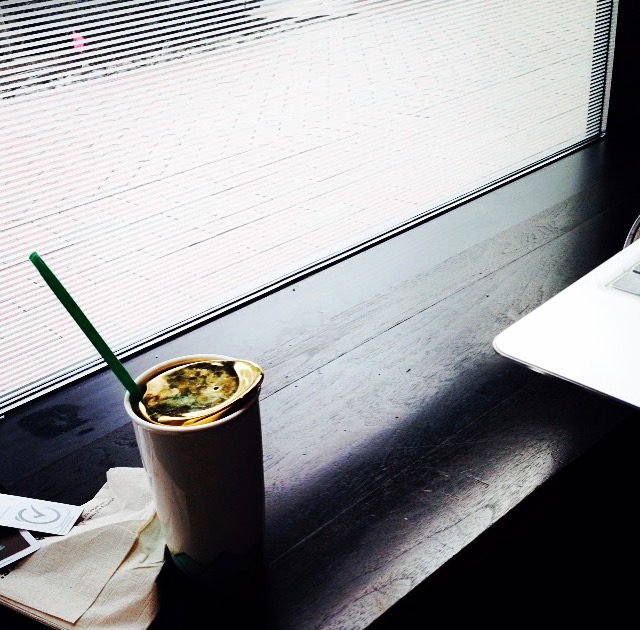 I am supposed to be working now, because...well, don't I always work? But at the moment I can't avoid my feelings sufficiently to sit at the computer and think work thoughts out.

Because right now my mind is with the child below, whose photo appeared on the Humans of New York Facebook page (unnamed, as with everyone so pictured).

He is quoted as saying, "I'm homosexual and I'm afraid about what my future will be and that people won't like me."

That quote broke my heart. 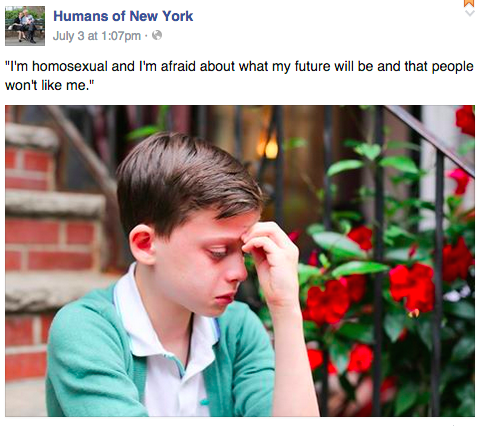 For reasons I do not understand, the photo was nearly instantly removed by Facebook after posting. It's there again because the photographer, Brandon Stanton, put it back, and probably also because of the social media outcry that ensued.

I'm guessing that it's the age of the child that concerned Facebook. They probably didn't want to get sued by his parents. Or perhaps they were afraid that people would complain the photo was offensive because it pictured a minor, e.g. "someone not old enough to make these choices," making a comment that could be construed as the social media site "encouraging" other children to be homosexual.

And homosexuality is considered to be immoral by some.

Yet as Mark Shrayber (writing at Jezebel) has pointed out, even if the reason was potential offensiveness, "How is this photo more awful than some of the other things posted on the site?"

Um, yeah, to put it mildly. Or as someone said the other day, literally:

"I'm really sick of all these boobies showing up on my Facebook page. How do I delete them?"

Actually one could argue that social media survives mostly on things that are offensive. After all what would we do without Instagram butt selfies and the debates they engender? Some NSFW?

In any case, demonstrating either tremendous caring or an incredible radar for what the public wants right now, no less a figure than Hillary Clinton got involved - directly. She personally wrote a comment to the child, a screenshot of which appears below.

As the New York Times points out, Humans of New York is wildly popular even without Clinton's endorsement. But there was something so touching about that photo and its content, and something so on-target about her reassurance to him, that this post in particular went incredibly viral, and fast.

From a communication point of view, it's a paradox, certainly. Clinton is obviously uncomfortable with people. But on social media, or any medium where she can take a little distance, there is a warmth and caring that clearly comes through.

Perhaps it is just a campaign strategy - it's true. But that would be one hell of a falsehood, wouldn't it? A lifetime of living in the public eye, coupled with extensive personal humiliation - just to pretend to care about other people.

But that's besides the point, and this is not a campaign endorsement.

The issue here is the needless psychological suffering of a child, a suffering that many people carry silently into adulthood and which causes untold pain for themselves and everybody else they come into contact with.

Having a sexual orientation that differs from most people should never be a source of shame. But people have made it into that, even though society has come a long way with respect to its beliefs about diversity and inclusion.

Actually this conversation goes deeper: There are many more issues that remain the subject of deep and bitter secrets. Here is an excerpt from "Friends in Trouble," an outstanding article on the subject by fellow "Brandergist," the recruiter Vincent Wright:

"Are you sitting alone in your room or your office, thinking you are the only one facing alcoholism, loneliness, DUI charges, drug abuse, a child in trouble, malicious siblings, elderly parents, disabled family members, a disability of your own, a dysfunctional family, alimony, child support, a failing business, a failing career, a struggling job search, divorce, trial separation, incarceration, lack of education, missed deadlines, project overruns, project failures, cheating spouses, misunderstandings, abandonment....I've heard so many people share their stories about the above list with such personal pain that often I wish there were a way to share with them how many others are telling the same stories that's causing them to hurt so much.  None of them are alone in the pain they are experiencing. "

The feminist movement told us a long time ago that "the personal is political," meaning that there is no distinction between injustice in the bedroom and injustice in the boardroom. Patterns of systematic oppression show up as seemingly small personal inequities and are repeated and magnified over and over again in bigger and badder ways until they become catastrophic.

How many women are underpaid, routinely beaten, provided a lesser quality of healthcare, given less food, left uneducated, and daily raped? Read this story and try not to throw up when you learn about a 4-year-old girl in a Syrian detention camp raped by some filthy pig who will likely never, ever be punished. Read about this American woman who barely escaped her abusive marriage after "doing the right thing" and staying home to raise her kids while her husband ran around, threw household objects at her, and stole her money so that she couldn't leave.

Normally, women don't discuss such matters. They don't want to share what feels like their personal shame.

How many men are suffering from domestic abuse?

How many children, male and female, are still being sexually assaulted by people who know them, who are supposed to be caring for them, who are instead using that child's vulnerable position and their own status of power to get away with torture?

How many people go to work every day and have to put up with a sadistic supervisor protected by an enabling system? Here's a funny and touching and important TV show starring Laura Dern, "Enlightened," that speaks to this very subject.

How many of us feel like we're helpless slaves to the system, caught inside something much bigger than ourselves, forced to uphold a superstructure that has way to much power over the individuals stuck inside it? Here's a great new TV show starring Christian Slater, "Mr. Robot," that shows what one such person might be going through.

Adults are children in grownup clothes.

Shame should be reserved for people who inflict pain on other people and should know better.

We must act now to create a better world which sustains and promotes the humanity of the people living in it.

I can't tell you that I know the way to get there. But I do know we can start by ending the needless suffering that people experience every single day.

Let's stop judging ourselves as bad.

Let's focus only on doing what is right, and part of that is giving ourselves the privilege of living in the light. Taking care of and nurturing our too-often beaten and battered spirits.

Here's a 1-minute video that helped me get started on a better path.

Hope it helps you in some small way.

All opinions are my own and do not represent those of my agency or the federal government as a whole. No endorsement expressed or implied. This is not a campaign ad or a product placement, either overtly or in disguise.