The Bad Advice Feds Get About Branding

The best advice is simple advice:

To build a great brand, oversimplify the story.

Federal agencies shoot themselves in the foot (and are shot there) by the bad advice they get and by their confused way of thinking about branding.

For example The Washington Post recently ran a story called "Building A Brand For Your Federal Agency." They interviewed the Partnership for Public Service rather than a brand consultant for this piece, which is inexplicable to me. And got this definition of a brand:

“The essence of who you are, who you want to be and how you want people—in this case potential job seekers—to view you.”

Listening to this, most people would be completely confused as to what it means or how to implement it.

In fact, defining a brand is very contentious even for brand experts. At the consultancy Brand Expressions, the founders recognize this by asking viewers to weigh in rather than trying to offer a single monolithic answer (see screenshot). 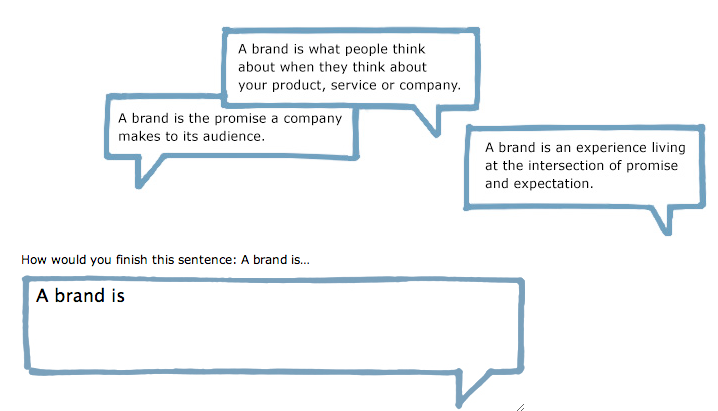 Screenshot via Brand Expressions
That openness to various ideas is itself an expression of branding on the part of the company.

At the same time, these are experts and they can say something pertinent to feds. Writing elsewhere, one of the founders of the company, Mark Gallagher, explains a brand as "an experience that lives at the intersection of promise and expectation." (See graphic) 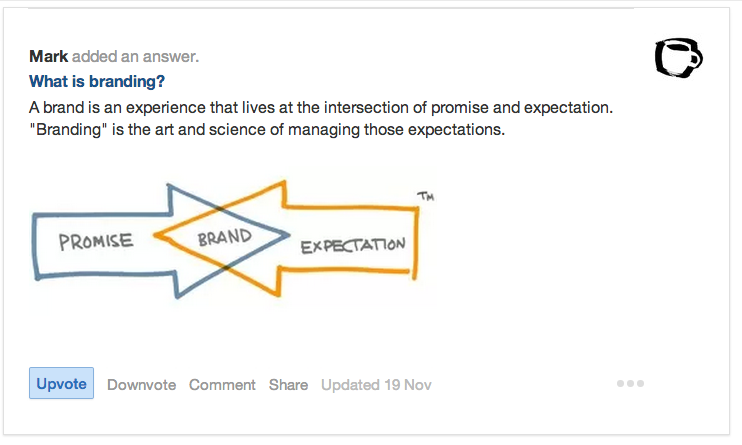 Screenshot via Quora
Put another way, your brand is:


And further, the act of "branding" is your attempt to "manage expectations" so that they match what people actually experience.

That is a great definition of brand, and great advice about branding, because it allows you to actually do something with it.

Understanding what branding is, however, is only the first step.

For federal agencies to truly undertake branding they would have to admit and overcome a number of other obstacles. This is doable, if they can ignore bad advice telling them that these obstacles don't exist or are irrelevant.

Federal agencies tend to tell their stories in very technical and complex terms because they don't want to "oversimplify." (I cannot count the many times I have been called a "USA Today" type in so many words.) People do not as a routine read white papers before buying toothpaste. You have to tell a big, simple story. As in: Bad people tried to attack us, we took out our guns and shot them dead.

Federal agencies formulate their communication plans using legal thinking rather than PR thinking. From a legal perspective, the less you say the less trouble you can get into. The problem with that is, the public deeply mistrusts the federal government because they think we're always trying to hide something. Many a time I have been frustrated that we had such a good story to tell, but I was not allowed to tell it.

Consider that Jamie Dimon, CEO of J.P. Morgan Chase, got a 74% pay raise for 2013 ($20 million pay for the year) despite a $2 billion trading loss on his watch. His continued success is undoubtedly linked to his "forthright" crisis communication style which has been called "a model" for others. (Here is his written testimony to Congress.)

In the case of J.P. Morgan Chase, a federal employee actually witnessed Dimon trying to stem the flow of information from the bank to the government. Scott Waterhouse, a senior regulator at the Office of the Comptroller of the Currency (disclaimer: I am a former employee) testified to this. As The New Yorker relates:

"One of the witnesses at the meeting, Scott Waterhouse, a senior regulator at the Office of the Comptroller of the Currency, recalled how, at a meeting in late 2011, just months before the trading scandal blew up, Dimon berated Douglas Braunstein, Chase’s Chief Financial Officer, for giving regular profit and loss reports to the O.C.C. Here, courtesy of the Huffington Post, is part of what Waterhouse said:

Levin: So apparently he [Dimon] had decided to stop the reports?

Waterhouse: I took it that way, yes, sir.

Levin: So he would be the one to restore the flow?

Levin: Did he raise his voice?

While federal agencies are not allowed to engage in "puffery" or propaganda, they are allowed to educate the public about what they do, to ensure that the public makes use of the services available to it, accesses its own information, and so on. Sharing successes also builds confidence and trust in the government, which is essential to the social fabric.
So when agencies get in front of the microphone and tout success, they are only doing their jobs. (Sometimes in law enforcement we see the opposite bias, where everybody tries to get the credit -- but in the overall scheme of things that is rare.)
If Federal agencies want to improve their brands, what they need to do is very simple:
1. Clarify and simplify the mission based on its relevance to the customer -- and nobody else.
2. Invest in communication and over-communicate rather than under-communicate.
3. Consider that "everything communicates" and look at communication from the outside-in, rather than the inside-out. Very often technical experts will think that external communications are oversimplified and "dumb," which is why communication for the general public should be kept away from technical experts -- except for verifying the information is accurate.
4. Invest in a brand architecture (a strategy to determine if different brands should co-exist under the main agency) so that if there are different "looks" to the agency there is sound reasoning behind this. Sometimes one part of the agency needs to present a different image than the rest.
5. Consider that employees are first audience rather than the last audience. They don't just carry out the mission, they are the mission.
As in the private sector, the chief branding officer should not be the head of communications but rather is the head of the agency. Communications in the strictest sense is only one expression of a model that flows throughout the organization, including operations and mission support.
Defining a brand may be complicated, but understanding branding really isn't, and neither is getting the job done. You just have to have the will.
* All opinions my own.
- March 12, 2014