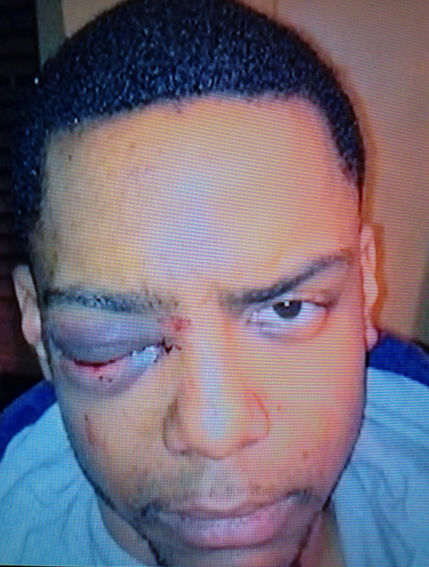 Screenshot via NY Post; also see the NY Daily News story
In a nutshell, here's what happened --  based on several news reports of the incident, and analysis at Failed Messiah:
On December 1, 2013, at 5 a.m., a black, gay, male student named Taj Patterson left a party bus in Williamsburg on foot. Williamsburg is home to a lot of people, including some from the ultra-Orthodox Jewish Hasidic community. He was jumped by a group of white, male Hasidic Jews who proceeded to beat him so badly that his eye socket was broken and his retina was torn.
What was this group doing walking around at five in the morning? According to Failed Messiah they "appeared to be part of a street patrol, probably Shomrim." That would make sense, as Williamsburg does have such groups to protect the community.
But why would they attack Patterson, if he didn't do anything wrong? You could say that it was pure racism, as the attackers were white, and the person being attacked was black. (The New York Police Department's Hate Crimes Task Force is investigating.)
So we may have a case of an insular community's street patrol gone awry. Perhaps.
But then why did they shout anti-gay slurs at him? According to one account, citing the Daily News, they told him to "Stay down, f----t!"
Setting aside the question of how they knew he was gay, why would this fact bother them so much? Again, perhaps they're just insular and intolerant -- we know that Judaism strictly forbids men from engaging in homosexual practice.
But I have another theory. Hasidic people are part of a culture in which sexuality is repressed and the genders are separated. Increasingly it has been reported that this leads to homosexual practices (and pedophilia) in religious school and beyond. Reportedly (NSFW) Hasidim have been known to go outside their communities as well, seeking satisfaction that is not permitted on the "inside."
My belief is that Taj Patterson was an innocent sacrificial lamb to people who could not confront their own impulses.
The New York City Police Department has plenty of evidence of this crime. There are eyewitnesses including the bus driver who stopped the attack. There are photographic images. Patterson was drunk, but the evidence speaks for itself. The political response by Brooklyn Assemblyman Hikind, that the accusation sounds "out of character" and "bizarre," is ridiculous on its face.
I hope the NYPD prosecutes this crime and that Hasidim realize the world, including their Jewish brothers and sisters, are watching.
* All opinions my own.
- March 16, 2014