5 PR Lessons From The Unfolding Crisis In Ukraine 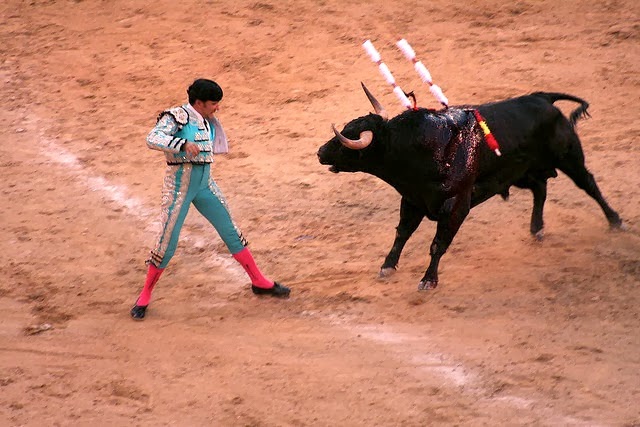 Photo by T-Oh! & Matt via Flickr
Freely I admit to being the average ignoramus about most everything, which is very helpful when applying a PR lens to situations because I am not swayed by "insider's knowledge" or even subject matter expertise.
Based on 15 minutes of watching what's going on through the CNN lens this morning, a few thoughts:
1. Don't get pushed into a crisis communication plan. What we look like, on TV, is reactive and freaked out -- like we're "winging it." We should have a PR plan thought through on this, or at least basic principles of engagement. If not, we should back away for a little bit until we can at least seem like we know what we're doing. Clearly Putin has thought this all the way through and he loves making President Obama look weaker than him (perhaps a few psychotherapy sessions could help Putin work through this anxiety.)
2. If someone punches you in the nose, punch them right back. We're talking about symbolic actions now. Talk on the television, talk from Russia about recalling the U.S. ambassador specifically. President Obama says "the international community" isn't going to put up with this. This sounds weak. Why do we have to hide behind this vague group? On TV, the boxer says: "I will crush him, he'll regret the day he was born."
3. Show some swagger. When President Obama walked up to the lectern, his walk was laid-back, and then he spoke in very calm and measured tones, reading off of a piece of paper, as though he were lecturing the class on the procedure for reporting plagiarism and how intolerable it was. I did not discern any emotion. Even if he didn't feel it, the nation "gets" in a sort of a vague way that Russia is trying to make us look weak. The President could respond in an extremely strong way, without buying into the "macho" paradigm. He could simply say, "we don't flatten defenseless people, sorry -- and that's why we have so many people trying to get into our country every day." A little attitude. We don't always have to be so nice. Putin is not nice. Like the guy said on Game of Thrones, "trying to be the most popular guy on the block is a great way to end up dead."
4. Say as much as you can about why the issue matters. Obviously the President has had tons of briefings by tons of experts who said, this is a very big deal, and we have lots of interests over there, so please be very very careful to say this, but not that and not the other thing. The result is that the public has very little clue as to what is going on or why we should care, and on top of that we are worried about Afghanistan and Syria and Iraq. We're spread out in costly ways militarily, we are economically challenged at home, and now we should start worrying about Ukraine? Why? Normally most of us would ignore it, except it's on CNN. So deal with it for us, tell us what the strategic interests are and what we plan to do about them, and let us go about our lives. Saying "just don't do it" (e.g. hello Mr. Putin, please just don't invade) is not communication that influences.
5. People go by simple visuals, not complicated words. They were talking on CNN about whether Putin had declared "war" or not and the expert said "well it may not meet the technical definition of war but it is a sovereign nation taking military action against another sovereign nation." It's like, huh? It's a war! There are tanks! There are helicopters! There is Putin on TV! It's a war! Don't parse nonsense distinctions, talk clear and direct and straight.
* Disclaimer: I am writing this blog post in my personal capacity as a private citizen, although I do work for the government, and all opinions are my own.
- March 01, 2014