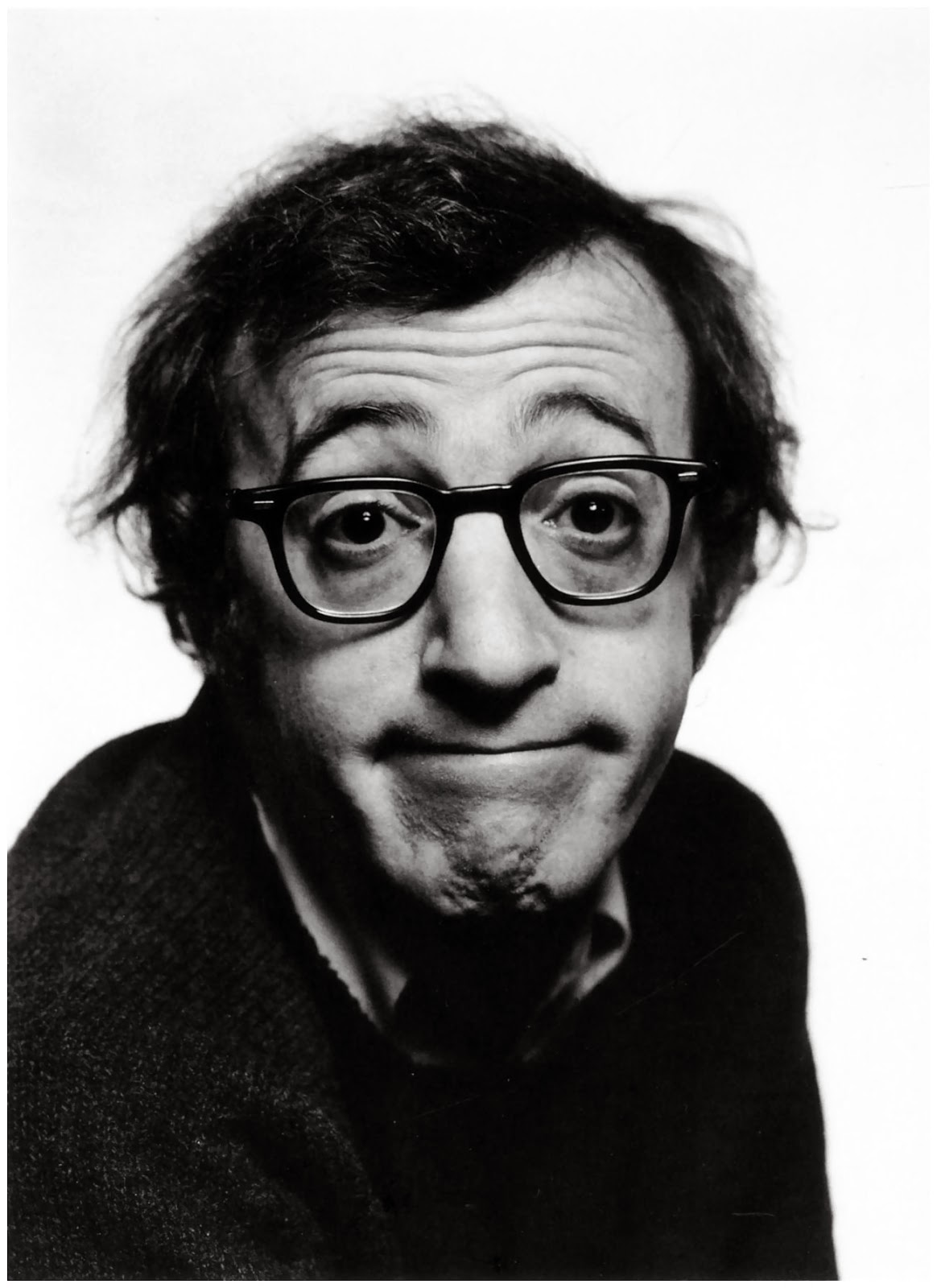 Woody Allen photo via ThatsAWrapShow.com, podcast featuring a discussion of Allen's film "Blue Jasmine."
In the American system of justice, people are considered innocent until they're proven guilty.

But it is also true that child molesters, especially molesters of our youngest children, get away with their crimes the vast majority of the time. A large scale study published by the Department of Justice in 2000 showed that sexual assaults of kids under age 6 are the least likely to result in arrest:

For the first time, today, February 1, 2014, Dylan Farrow spoke in the first person about what she says happened to her at Allen's hands in 1992. Dylan says she was only 7 years old when her adoptive father, Woody Allen, sexually assaulted her:

"When I was seven years old, Woody Allen took me by the hand and led me into a dim, closet-like attic on the second floor of our house. He told me to lay on my stomach and play with my brother’s electric train set. Then he sexually assaulted me."

According to the Department of Justice study of juvenile victims of sexual assault, 70% of attacks happen at a residence.

Attackers are known to the victim the vast majority of the time. Nearly 6 out of 10 molestations are carried out by acquaintances, and 3 out of 10 by members of the family.

"In August 1992, after disappearing with Allen in Mia’s Connecticut country house and reappearing without underpants, Dylan told her mother that Allen had stuck his finger up her vagina and kissed her all over in the attic." - Maureen Orth, "Momma Mia," Vanity Fair, Nov. 2013

The Department of Justice says that juveniles represent the vast majority of victims of "forcible fondling (84%), forcible sodomy (79%), and sexual assault with an object (75%)."
During the attack, says Dylan, Allen spoke in a soothing tone about how she would keep quiet, and he would pay her back by putting her in his movies:

"He talked to me while he did it, whispering that I was a good girl, that this was our secret, promising that we’d go to Paris and I’d be a star in his movies." - An Open Letter From Dylan Farrow, The New York Times, February 1, 2014

Does this sound like something a child would make up? Can we really believe that Dylan was brainwashed by her mother, Mia Farrow, Allen's ex-wife, to say these things?

The concept of a father putting his face, forward, onto a child's lap - atop her genitals - is so strange and horrifying. Maybe she made it up. Maybe the babysitter was lying when she testified that, as Orth reports:

"...on the day of the alleged attic incident, while Mia was out shopping, she had come upon Allen in the TV room, kneeling, face forward, with his head in Dylan’s lap." -"Momma Mia"

Why didn't Dylan tell someone what was going on before the attic incident? Maybe they were playing a game, a version of hide-and-seek.
Does this sound like a game to you?

"I would hide under beds or lock myself in the bathroom to avoid these encounters, but he always found me." - An Open Letter

Actually, like most victims of child molestation, she didn't know what exactly what was going on. Except that it made her feel very, very bad, and that she shouldn't tell anyone, until she had to:

"I thought this was how fathers doted on their daughters. But what he did to me in the attic felt different. I couldn’t keep the secret anymore." - An Open Letter

Diane Keaton believes in Woody Allen. There she is, all dolled up at the Golden Globes, accepting a prestigious award on his behalf.  (Allen was nowhere to be seen.) 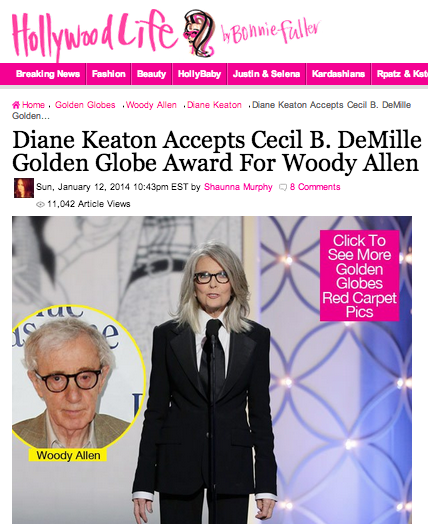 Screenshot via HollywoodLife.com
In her speech Keaton praised the "voices" of the "unforgettable female characters" he's featured. (In other words, Allen's brand would be nothing without the women who spoke on his behalf through art.)

“The feature, for me anyway, that sets Woody’s writing apart are the voices of four decades of unforgettable female characters. 179 of the world’s most captivating actresses have appeared in Woody’s films....They’re the hallmark of Woody’s work."

But what about the voice of Dylan Farrow?

Dylan, whose father allegedly had his hand up her skirt? 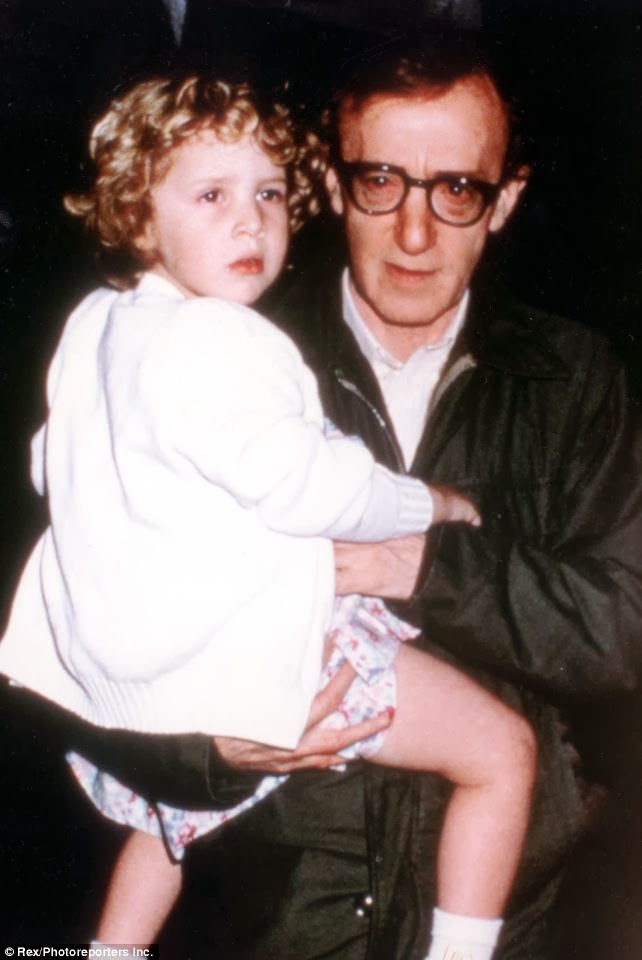 Photo via the Daily Mail, reproduced via Fair Use for educational purposes.
Dylan Farrow, whose eyes are haunted. Look at those haunted eyes. 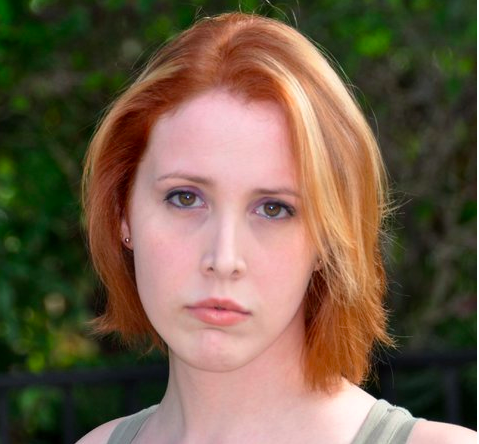 Photo via the New York Times. Fair Use exception for educational purposes.
What about cost that silence has exacted from her soul?

While Allen is famous and celebrated worldwide, Dylan had to change her identity to escape the memories, and him, as is vividly detailed in the New York Times by Nicholas Kristof.

She tells Kristof she's been scared of Allen's brand.

“I’m scared of him, his image. Nobody wants to think this legendary filmmaker is my worst nightmare....when I picture things chasing me or happening—I think it’s him after me. It’s hard to explain how terrifying that is.”

But one thing does seem certain. The more educated we are about the signs of sexual molestation, the more we report it, and the more aggressively we prosecute it, the less likely it will be that people with lots of power can abuse those with none.