10 Things The Government Must Come To See About Itself 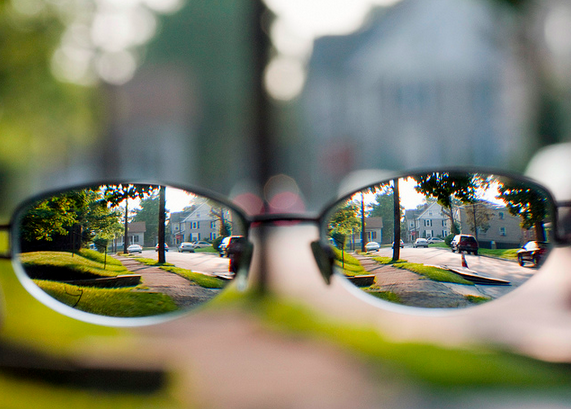 Photo by haglundc via Flickr
My older daughter is taking a class called Visual Rhetoric. This is a fancy way of saying that photos can be interpreted differently, depending on the perspective you bring.
I was in the new Safeway Saturday night, the one by the mall. They have a health checking machine that gives you an eye test.
I got a lot of the test wrong.
Or, to be scientifically more accurate, I'm myopic in at least one eye. (I don't know which one, because I held up my hand to my face just the way the avatar showed me to...except now I'm not sure if I should have held up the opposite hand, or the one on the same side.)
Either way, I can't see right, at least not totally.
In real life I tend to have the same problem. Things that are far away from me, that I don't care about, I can analyze to a T. I can tell you how J.C. Penney should reorganize, or how the Kardashians can reinvigorate their brand. I can deconstruct the federal government.
But things very close to me, feelings and people and relationships, I tend to mess up because I cannot be objective.
And my own feelings, pfah! I have given up any hope of insight.
The government -- specifically, the civil service in the United States -- is very much the same way. It's broken, so very broken in many ways. And the people inside the government know that. But once you are on the inside, the closer you get and the higher you go, the harder it is to really see it, especially if you're in a particular agency.
People outside the government, who study us, can be thought of as opthalmologists. All they do all day is check our eyesight, and they are trying to give us glasses.
Not to take away our power. To help us to see.
At this point, an important distinction. Two kinds of groups (academics, nonprofits, etc.) study government:
* Some study a discipline that a particular government agency carries out - for example secure borders, trade, foreign assistance, and so on.
* Others study government as a discipline in and of itself - a discipline in its own right.
It is the second group that I am concerned with. Why do we not leverage the insights they give us so routinely?
Here are just a few examples from the Partnership for Public Service's August 2013 study, "Building the Enterprise: Nine Strategies for a More Integrated, Effective Government."
1. The concept of an enterprise-wide approach to the federal government. This doesn't mean creating a central "blob" for every mission function, like a central hub. It does mean thinking in a unified way. Why must their be so much customization, such a proliferation of offices and programs and systems for items that are essentially offering the same thing? Let's face it - HR is HR and it should be handled consistently.
2. The concept of building a leadership cadre capable of moving a program portfolio forward. The distinction here is between leaders who move their agenda forward, and leaders who move the enterprise forward. We are all familiar with leaders who come into an Agency with a certain philosophy and approach, and they are very effective at implementing that - with the unfortunate consequence that anyone who doesn't agree, doesn't believe, or isn't part of the "thing" just waits it out until the next Administration. Leaders have to go a level higher.

3. The concept of an independent evaluation office that assesses various federal agencies' performance. Without independent, public evaluation there is no accountability. Instead, we get reams of paper with masses of numbers touting activity after activity, with no clear linkage between activity and result. A lot of people thrash around while they're drowning - that is activity too.
4. Management of information technology as a governmentwide resource. If IT investments were viewed from a governmentwide perspective rather than on a case-by-case, agency-by-agency basis this would no doubt bring greater scrutiny on individualized spending and result in cross-cutting savings. I am always amazed at the reasoning that certain investments and systems are "obviously" needed when commercial off the shelf software can do much the same thing and with little or no customization required.
More important though than specific recommendations is the approach we take to a thing, because our approach dictates the behaviors that follow. Deloitte University Press recently came out with a study, also in August 2013, "The New Government Leader: Mobilizing Agile Public Leadership In Disruptive Times," that highlighted 6 areas of necessary improvement* -- I agree with all of the below 100%.
1. Siloed thinking. What government needs now is "agile integration," which "recognizes the complexities and interdependencies of public, private, and nonprofit missions." Essentially - leaders bring related people and organizations with common cause together, even if they don't do exactly the same thing.
2. Needing all the answers first before speaking. Rather, government should adopt "quiet transparency," that is to dialogue with various audiences without having all the information first, and to adapt while working in public view. It's not about being the first or loudest, but it is about being out there with nothing to hide.
3. Lack of digital networking skill.  It is really high time to use "digital aikido," i.e. to be present on social networks, listen to the conversation, and respond to what is being said. Rather than to observe dumbly, or to put out feel-good propaganda that only makes one's credibility worse.
4. Failure to think broadly to anticipate opportunities and threats. Government thinkers tend to focus narrowly on a particular mission, discipline or subject rather than to look broadly, doing "horizon scanning...across disciplines and environments and test-ing assumptions about current and future trends." This requires a creative combination of educated guessing (even "contradictory hypothesizing), questioning, and so on as a means to aid inquiry.
5. Insistence on full-scale rollouts. In today's day and age it is much smarter and more efficient to use "rapid prototyping," i.e. small pilots where you can benefit from a small-scale launch and adapt the product or system to arrive at the one that is most useful. The idea is to constantly test and question rather than invest a lot of time and money in a potentially hulking, mammoth failure.
6. Conformism. Leadership in government requires "rebel rousing," not more vanilla ice cream sandwiches off the assembly line. "Contrarians" who operate in the interest of the government save a tremendous amount of time and resources because they bring to light problems before they turn into disasters.
*  I was one of the interviewees for the Deloitte study. No endorsement of any party mentioned in this blog is expressed or implied. All opinions my own.
- February 13, 2014