The Good Housekeeping seal of approval (no endorsement expressed or implied)
The dream is open data. The nightmare is that open data has little or no credibility. Consider this:
Yet the polls tell us that people overwhelmingly do not trust their government. "Our Jan. 2013 survey found only 26% saying they can trust government always or most of the time, while 73% say they can trust the government only some of the time or never." - Pew Research Center, July 23, 2013 (quote and screenshot) 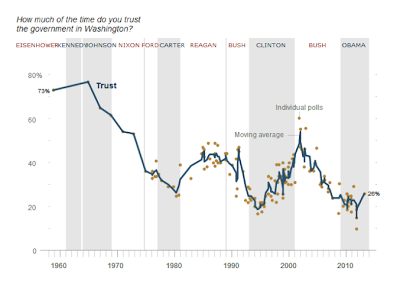 In essence, government and its data has a credibility problem - a.k.a. a PR (public relations) crisis.
Any expert will tell you that in a PR crisis, trust is regained by doing a few fairly obvious things:
In the case of government and open data, there are a few practicalities that get in the way of following classical PR advice:
Yet there is one thing we can do right now to both increase the efficiency of open data collection and increase the credibility of this data with the public. That is the concept of the "verified" feed, marked with some seal akin to the "Good Housekeeping Seal of Approval."
The basic idea is to release the dataset in the best shape one can, and then mark it as "Official Government Release" in such a way that it can always be traced to its official source as authentic (both externally and within the dataset code). Then, rather than spend government agency time and money building elaborate applications to display the data, make the feed available to the public in different venues - both on Data.gov and on any website where interested stakeholders congregate.
Ideally, at least on Data.gov, the feed would be opened up in such a way that external reviewers could comment on it, similar to Wikipedia.
By:

...the government data feed is de facto repositioned as "just another source of data to be critiqued."

If we were to do this, it is likely that public engagement and trust in the data would be increased, while unnecessary expenses on useless displays of open data would be reduced significantly.
* All opinions my own.
- September 08, 2013