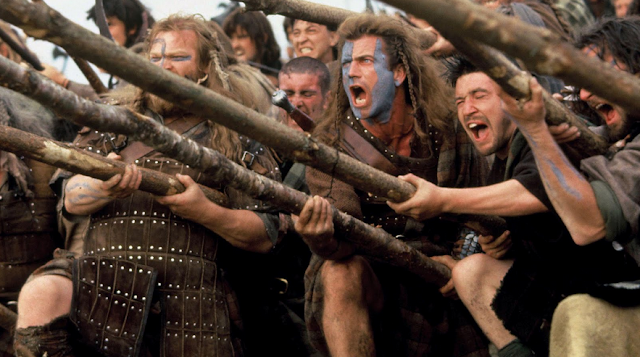 Remember this fighting scene from Braveheart? (via Oscarblogger)
Just Another Medieval War? NOT!
Just mention the word "Braveheart" and you'll probably hear "I love that movie!" Nearly 20 years after its original release in 1995, it remains an incredibly popular film with about $210 million worldwide gross, numerous awards including 5 Oscars, and a user popularity ranking of #83 out of 250 at IMDB.com.
"Braveheart" endures because the plot and the acting have meaning far beyond the actual time, place and conflict. On the surface it's "just another" medieval war, but the broader appeal has to do with the movie's messages about leadership, motivation, resilience, treachery, integrity and of course love. It's the leadership lessons that hold particular interest for me.
Quick Recap
Mel Gibson plays Sir William Wallace, who leads a guerrilla war against England's invasion in 1280. Early in the movie the conflict gets brutal and personal after English soldiers try to rape his wife and then execute her for fighting back.
The tragedy turns him into an incredibly fierce and determined warrior, and although he died before full freedom could be secured, one victory he co-led was the Battle of Stirling Ridge in 1297.
As bad as the Scots had it, the fact that they followed him into battle -- facing an almost-certain death -- demonstrates that Wallace was not just a fighter but also a leader. Normally it would have been a slaughterhouse considering that (by one account):
Yet Scotland does win and at least temporarily, has regained its independence. Though the English subdue them for a time, and Wallace is bestially executed in 1305, the country breaks free for good in 1314.
The movie taught me 5 important things about leadership.

1) Be Loyal To Your People
Despite what we learn from the textbooks, it's instinctive for leaders in the real world to focus on managing up rather than around. Wallace sees himself as one with the people and rejects a "peace" deal from the English king that would have left him disempowered and them demoralized and leaderless.

Princess Isabelle: He declares it to me, I swear it. He proposes that you withdraw your attack. In return he grants you title, estates, and this chest of gold which I am to pay to you personally.
Wallace: A lordship and titles. Gold. That I should become Judas?
Princess Isabelle: Peace is made in such ways.
Wallace: Slaves are made in such ways. (IMDB)

2) Trust Behavior, Not Words
The true leader knows very well the difference between what people say and what they actually mean to do. So the conversation above continues, with Wallace telling the emissary of the king, Princess Isabella, that he isn't taken in by flattering talk but will go by actual behavior - i.e. the execution of previous Scottish nobles under the very same guise of "peace."

"The last time Longshanks spoke of peace I was a boy. And many Scottish nobles, who would not be slaves, were lured by him under a flag of truce to a barn, where he had them hanged. I was very young, but I remember Longshanks' notion of peace."

Just before the Battle of Stirling Bridge, Wallace could have made a lot of excuses for not communicating. For example:

But instead he rallies his soldiers with these famous words:

“They may take our lives, but they’ll never take our freedom!”

There are actually two parts to this imperative.

4) Wear The Warpaint
Wallace had a lot of things to cry about. But if he was going to win a war, or at least inspire people to ultimately win a war, he had to dress and act in ways that are symbolic of power and aggression. So instead of walking around with Kleenex he painted his face blue and white, got into gear, and rallied the troops.
Awhile back in 2008 the LA Times ran an article on then-candidate Barack Obama. It talked about his efforts to position himself as "ordinary" person despite his elite status. I remember thinking it was not such a good idea for himself to pursue a personal branding strategy of diminishment. Accessibility is fine, but the leader of the free world has to portray incredible power.

Credibility comes from substance but it also comes from image. When Wallace puts on the battle paint in "Braveheart" he sets a positive cycle in motion: demonstrating strength, causing others to see him as strong.

5) Embrace and Inspire The Naysayers
Often leaders shrink back from engaging with opponents when they should be doing precisely the opposite -- getting right in critics' faces, taking them down and then bringing them back again with inclusive, inspiring rhetoric.

This is exactly what Wallace does in the movie, responding directly to a soldier who gets scared and speaks up in front of the others -- he wants to go home.

Young Soldier: Home! The English are too many!
William Wallace: ...Run, and you'll live... at least a while. And dying in your beds, many years from now, would you be willin' to trade ALL the days, from this day to that, for one chance, just one chance, to come back here and tell our enemies that they may take our lives, but they'll never take... OUR FREEDOM! - (IMDB.com)

I always enjoy a great movie like "Braveheart," especially when it teaches me the kind of stuff you can't get from a book and will absolutely need in the real world.

* All opinions are my own.