Building The Government Enterprise: What's Missing Is The Brand 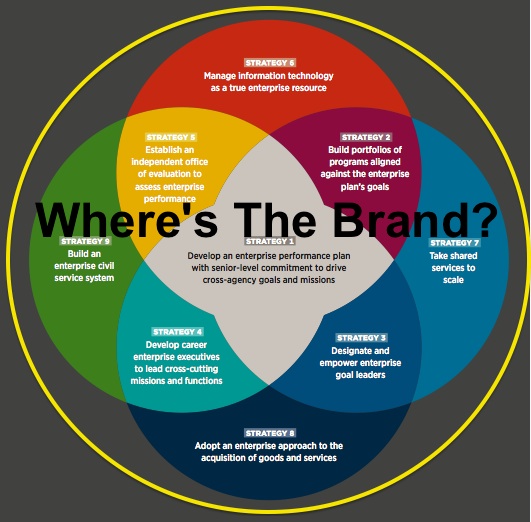 Screenshot of the 9 recommendations from PPS modified by me to ask a key question: Where's the brand?
Yesterday I stumbled upon a C-Span program of intense interest. It aired August 8, 2013 and featured a presentation of recommendations in in a joint report by the Partnership for Public Service and Booz Allen Hamilton: "Building the Enterprise: Nine Strategies for a More Integrated, Effective Government."

The report has the usual common-sense recommendations that taxpayers normally agree to (i.e. combined purchase of janitorial supplies to keep prices low) and that Washingtonian civil servants typically roll their eyeballs at ("Yeah right, sounds good but we've tried all that before and it will never happen here.")

As if to anticipate the myriad objections their report might generate, Speakers Lara Shane (PPS) and Ronald Sanders (BAH) said some things of a supposedly calming nature. No we are not saying to centralize everything. No we are not trying to add new requirements to your already onerous workload.

Let me say that the audience did not look all that worked up. I have a friend from New York who always calls me to make fun of the fact that I live in D.C. She thinks it's very humorous to say things like, I was watching C-Span the other day...not a very lively crowd.

I have to agree with her. Washington does indeed seem fairly anemic, especially when you consider the amount of power and money that changes hands here.

From my perspective, the problem is not that Beltway folks are dull. Rather, the inhabitants of this town are bound together, yet driven by opposing needs -- almost like the destructive, co-dependent couple Eminem described in "Love the Way You Lie": we are "what happens when a tornado meets a volcano."

The Partnership for Public Service issued a reasoned and visually appealing report that makes a lot of sense. But in their vision of a federal-wide enterprise that is more than just a "holding company," they're missing something vital -- the vision of a corporate brand.

Corporate branding is more than just a logo. It is the process of adding meaning to the activities you pursue in unison. The federal civil service, if it is ever to adopt an enterprise-wide approach, must embrace the concept of the U.S. government-wide brand.

As Sanders pointed out in the talk, working as an enterprise does not mean eliminating its parts in favor of a mothership-like Headquarters that pulls the strings. It does mean intelligent coordination. The first step in this process, however, should not be identifying dollars and cents savings. That's been done a million times before, and it's never gotten off the ground.

Rather, we should start by winning the hearts and minds of the federal civil servants who contribute to this envisioned enterprise. We should show them what it is we're going after - the meaning of it all - and how they can have a place in the new system rather than be elbowed aside.

As usual when business plans are introduced, the communicators tend to get forgotten and left back. But brand-based communication, together with a solid change management and organizational development plan, is the only thing that can make this effort really work.

In the end, government is a business, and every business begins and ends with a brand.