Are You A Visionary or a Leader? Ask Steve Jobs 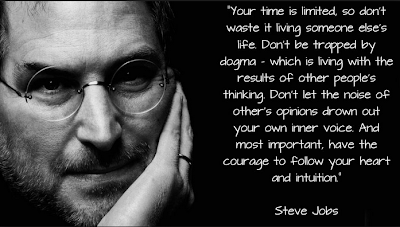 Screenshot via Anonymous Art of Revolution
The new movie Jobs is out and has crashed and burned on impact at the box office. Even Apple cofounder Steve Wozniak weighed in with some tepid criticism: "I was attentive and entertained but not greatly enough to recommend the movie."

Television has done a better job. This weekend I watched "Pop Innovators Presents: Steve Jobs" on E! It presented, in a nutshell, the highlights of his life, his personal philosophy, his business vision, and his leadership style (or the lack thereof).

The continuing fascination with Steve Jobs is the desire to copy his unique brand of magic. But it's important to point out that he had vision, not leadership ability.

See for example this comment from Steve Wozniak in Gizmodo about the new biopic:

Way back in 1987 the book Accidental Millionaire documented Jobs' erratic behavior and abusiveness. See excerpt from a book review in The New York Times:

In "The Real Leadership Lessons of Steve Jobs," his biographer, Walter Isaacson, noted that the business leader excused himself from acting with basic professionalism:

Isaacson actually had a conversation with Jobs in which Jobs excused his own behavior on the basis of his business results:

Personally I am moved by Jobs' personal beliefs, and his vision. Who cannot recall the 2005 Stanford commencement speech, which brought me to tears:

"Your time is limited, so don't waste it living someone else's life."
But I am not moved by the way Jobs treated people.

It is true that the iPad, the iPod, the iMac, and so on have transformed our lives for the better.

But you can't be a leader and also be an abusive person.
"Have the courage to follow your own heart and intuition."
No matter what kind of genius you are, it is not OK to mistreat people. There is no excuse.