Ultimately, what makes a brand valuable to the consumer is the ability to buy their way out of personal insecurity. Whereas you are not good enough on your own, by purchasing the product, you take on an identity, and this gives you confidence.

By purchasing the product, you take on an identity -- a human identity congealed within a product. The product itself is just a thing, but you project meaning onto it. Another way of saying this is that you have a "brand fetish," or a psychological fantasy, in which you ascribe to the product properties that it really does not have. 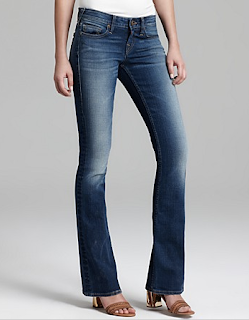 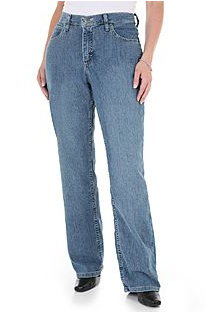 Even at the discounted price of $132, the True Religion jeans command more money for what is essentially the same product. This holds true even on eBay where women's TR jeans are selling in the $80-$250 range.
Why are TR jeans worth more than Lee Riders? You may say that the style of the Lee Riders jeans is a bit fuddy-duddy. OK then how about Route 66 tapered jeans? Which also sell for $19.99, also at Kmart. 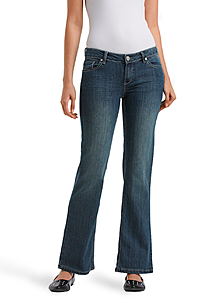 True Religion's company profile page says that it's all about a superior product: 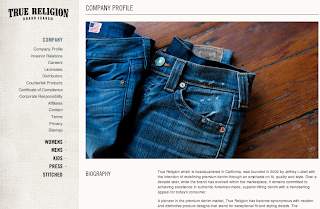 "True Religion...was founded in 2002...with the intention of redefining premium denim through an emphasis on fit, quality and style....A pioneer in the premium denim market, True Religion has become synonymous with modern and distinctive product designs that stand for exceptional fit and styling details."
However it is not uncommon for brands to associate themselves with celebrities and thus to enhance their "street credibility," as at online fashion retailer CoutureCandy.com: 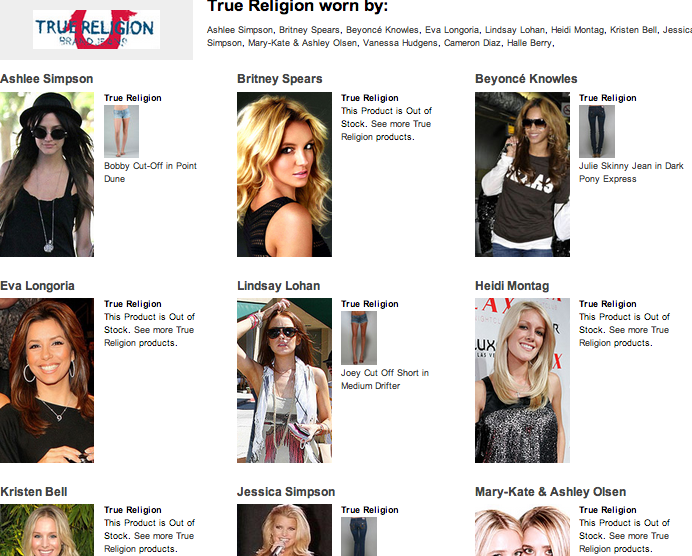 Obviously, the customer is not paying an extra $112.01 (on a sale day!) for the fabric or for the fit. They are paying to feel like a celebrity.

However, if you were to see something bad that went on behind the scenes in creating those jeans, the fantasy would be ruined.
Or if you were to work for the company that created those jeans, were mistreated, and told the whole world about it, the fantasy would be ruined.
Therefore it is in the company's best interest to have its own employees saying great things about the brand -- not only in terms of its quality but also how the workplace runs and how employees are treated.

(Note that True Religion is only a random example, and I am not implying anything about the company.)
So the job of a brand manager is to implant the fantasy in the consumer while maximizing worker engagement and output, and minimizing their discontent. All at the lowest price possible.

All of this is very oversimplified Marxian theory of how capitalism works. Essentially, you have to exploit the worker AND at the same time make them accept and even welcome their lot. Remember, the worker is also the consumer. And so they must idolize and crave the very products that their labor is being exploited to generate.

To understand how this is done in contemporary society, we can use the work of sociologist Erving Goffman. Goffman wrote a phenomenal book called The Presentation of Self In Everyday Life which essentially laid out three principles of brand (quotes vi Wikipedia):


To conceptualize the above, Goffman looked at social behavior as if it took place in a theater. You can imagine the brand producer engaging in image control and avoidance of shame, while the audience engages in truth-seeking.

This is not the place to go into the broad historical background associated with branding, but we can look at what happened with the rise of the advertising industry in the 20th century. As the AMC series Mad Men captures well, there was a kind of "Golden Era" (although not so golden) of mass consumption when it was all about image, and very little about what was behind the curtain. We see it idealized as the 1950s-1960s, though I think this has fluctuated with times of greater and lesser consciousness of the plight of those on the margins - those whose labor was extracted with a maximum of exploitation, abuse, carelessness and so on.

What is happening right now -- no doubt due to the explosion of social media -- is a growing global decision to bring exploited labor out from behind the curtain and into the front of the stage. In my view these categories cut across both legal and illegal workers because both feed into the global economy in some way -- capital is spent because of them.

This is not to mention the everyday exploitation of people who work in ordinary office settings. They show up to work with minds rearing to go, producing knowledge and innovation for their employers, but more often than not go unrewarded at the level that their employers enjoy.

In recent years, academics, filmmakers and others have come to question what brands are doing to society.  Examples include Naomi Klein's 1999 book No Logo: Taking Aim At The Brand Bullies and the organization AdBusters. In his well-received documentary The Greatest Movie Ever Sold (2011), Morgan Spurlock showed how large brands attempt, through product placement, a form of mind control - making us want more, more, more -- preferably without thinking. And there are many other examples, including academic studies of the sociology of branding itself.

In addition, the more extreme abuses of the branding system have caused outrage. One of these is charging exorbitant fees for products that are produced by poor people working for a pittance in miserable factory conditions. The recent collapse of a Bangladesh factory, the worst such incident in the garment industry's history, was a tipping point as people continue to follow the plight of the people who worked there. Brands understand that they must respond and are doing so with a variety of accords to prevent a future disaster. Consider that such an accord only became urgent after the collapse.

Under the microscope in an increasingly transparent world, brand makers themselves have come to realize that the jig is up. People are increasingly drawing a connection between the "invisibles" who produce and the corporate face of those who deliver. For brand producers to continue to be profitable and maintain the system, they will have to continually up their game in terms of compensating the worker fairly and eliminating the abuses that are built into the system. They will have to engage workers in perpetuating the system itself.

This could happen. What could also happen is that organizations realize that worker abuses are inefficient and cause too much bad PR, and simply eliminate people from the system as much as possible -- further widening the gap between rich and miserably poor.

My weathervane tells me that there is still time for brands to engage with employees and create value systems together. This could be profitable on a lot of levels and restore some economic balance to the system as well as the social stability that has been lost with the decline of the middle class.

If they do not, we we are headed toward a society in which brands as we know them today will become synonymous with systemic evil.

In the longer-term, I am hopeful that money as we know it today will be obsolete (see for example The Venus Project) and that capitalism becomes a different kind of competition. One in which we reward people who eliminate poverty, disease and antisocial behavior; one in which everyone has their basic needs met; one in which people enjoy relative freedom and non-interference in their daily lives.

In the meantime we have the now, which is far from the dream. But I do not think we can avert our eyes any longer from the people we don't want to see. Nor can brand producers pretend they do not exist...because when the invisible becomes visible, it affects the bottom line.

* As always all opinions are my own.