Supertemp vs. day laborer, brands & the broken circle of trust 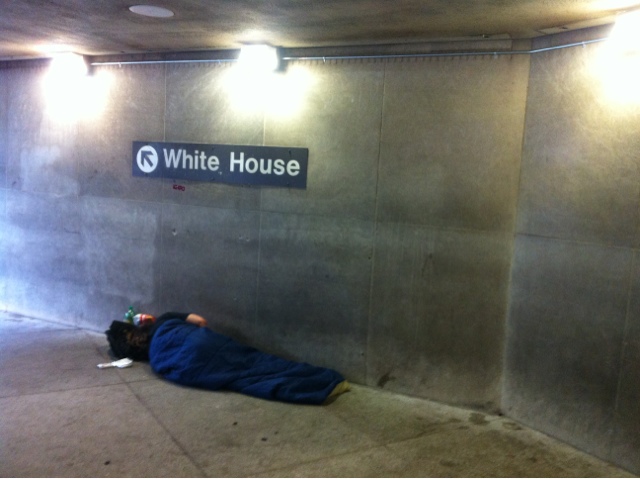 I took this photo outside a Metro Station near the White House.
In "The Divided Self," Dr. R.D. Laing explored how schizophrenic people are actually made that way by so-called "normal" people.
Schizophrenics experience a shattered sense of self. That is, parts of the personality are experienced as though they are external, distinct, foreign.
When the individual is pulled too far in contradictory directions, illness emerges in which they no longer know what reality is.
We are living in an economy that exerts contradictory and fragmenting pressures on the individual worker.
There is no longer a unitary, stable sense of "me and my job" in relation to "my employer and what they do," situated in "my hometown," surrounded by "my family," "church," "school," and so on.
Rather, there is only:
In this culture the worker is motivated primarily by the need for survival in an economy with dwindling payoff. See for example:
Very few will achieve "Supertemp" status of the kind they wrote about in Harvard Business Review.
Many will be riding in the back of vans to worksites where the pack free samples touted on Facebook.
You have to ask yourself, where is the identity of the worker as worker in this system? A system which offers no loyalty and much exploitation?
And why should anyone trust anyone?
The answer has to come back to some higher meaning.

Most people don't expect to get their life's true meaning at work.

Instead they are working to survive. Hoping that in the future they or their children will somehow have a better life.

So they suffer through indignity, inconvenience and often outright abuse. Knowing that they have to keep up with rent - food - car.

But there is an unspoken social contract in the workplace, too. That contract might be a load of b.s., or it might actually have some reality to it.

It says that you and I working here, together, are creating something more. That it's not only about efficiency, effectiveness, return on investment and maximizing profit. That maybe 5% of the time, we get to experience meaning.

The meaning that people need to experience at work is the brand. Brand is the vision, the mission and the core values all wrapped up in one.

When people go to work and experience no meaning, or even the opposite of meaning -- dystopia -- it sets the stage for the further dismantling and destabilization of society.

Trust between employer and employee is essential to maintaining order. One cannot benefit endlessly at the expense of another. The other cannot take advantage without some eventual righting of the scales.

Always, brands are a substitute for something, and I am consumed with understanding what they do for us now. I believe that in the workplace, the concept of the "brand" is like an organizing principle, a secular religion, that lends meaning to spending 40-80 hours a week earning a buck.

I can't tell you how we right the system. I do know that a pervasive lack of meaning in the workplace is a very socially dangerous thing. Pushing us further down a path of chaos and destruction, putting us in a rabbit hole where we hide because nothing is secure.

* All opinions my own. Thank you to my husband Andy Blumenthal for the encouragement and feedback.
- July 11, 2013