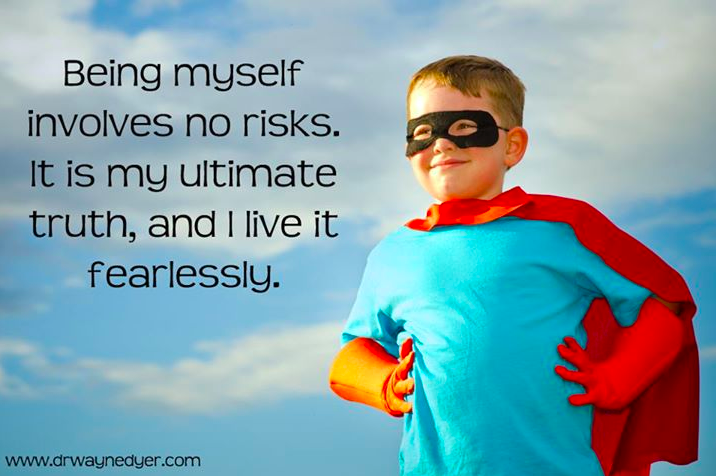 Image via Dr. Wayne Dyer
1. Stand your ground. "Own it." Be loud and proud - do not shy away from your identity, beliefs or ideas. Flaunt it. "Let your freak flag fly." Do not apologize. Celebrate instead. The fact is that you can be legitimate and unpopular at the same time. Oh well. People will respect you in the end.
2. Honor others' right to disagree - intensely. Oddly, people who represent extreme or controversial beliefs often try to squash disagreement in ways ranging from the subtle to the obvious. It's almost as if they think they can force their views into the mainstream by doing so. Remember, you are mainly talking to your detractors! And you can't force them to agree or trick them into doing so, either. Generally if you want to win people over to your side, it's important to show respect for them and to lay off the proselytizing and pressuring.
3. Explain yourself early. Frequently communicators of controversial subjects wait until people ask questions -- by which time the audience is predisposed to think that you're wrong about whatever controversial thing it is you represent or do. Instead, put information out ahead of time in a very clear, again unapologetic way. Just say it.
4. Repeat the message often. Frequently communicators get bored with the same old topic, so they switch to a new one. This actually detracts from their effectiveness because focus and repetition are what help messages stick. I personally have very strong views about branding efforts that run counter to most practitioners in the mainstream, e.g. that advertising is least important and internal communication is primary. I have been saying the same thing now for more than a decade, and only in recent years has the concept begun to catch on. Repetition is what it takes to make an idea become familiar, trusted and stick.

5. Make it personal. Controversy is one of those things where you win with logic, but also with appealing to emotion and common sense. Tell the story in terms that the audience will identify with, even if they will never agree with you. Connecting on that personal level makes it easier for the audience to listen to what you are saying and tolerate your right to say it, even if they disagree.

6. Overwhelm with information. When you represent something controversial, providing evidence accomplishes a few goals. First, it shows that you are confident enough in your views that you seek to justify them in open debate. Second, it provides an objective basis for discussion. Third, it helps the listener accept the emotional risk of opening up to your ideas. Each and every justification you provide serves as a cushion against their fear.

7. Engage many audiences. Do not just communicate with those who agree with you, those who have a direct interest in your work, and so on. Talk to everyone who might potentially interact with your organization now and in the future. Strength of message involves not only focused, coherent, and consistent messaging but also a network of relationships across a wide variety of stakeholders. And obviously, again, never insult your detractors - you can't win them all.

* As always all opinions are my own.